We weren’t expecting to see spiritual warfare when we went to Padangbai. Our main purpose for visiting the small fishing village was actually just to check out the action below the water: reef sharks, manta rays, turtles, and general ocean scenes seemingly taken straight from Finding Nemo. And while we were fortunate to experience the incredible marine life Padangbai boasts (sans manta rays), this wasn’t the most memorable part of our short stay in the town. That’s because this was no typical day on Bali’s east coast; it was the day of the Barong dance ceremony. 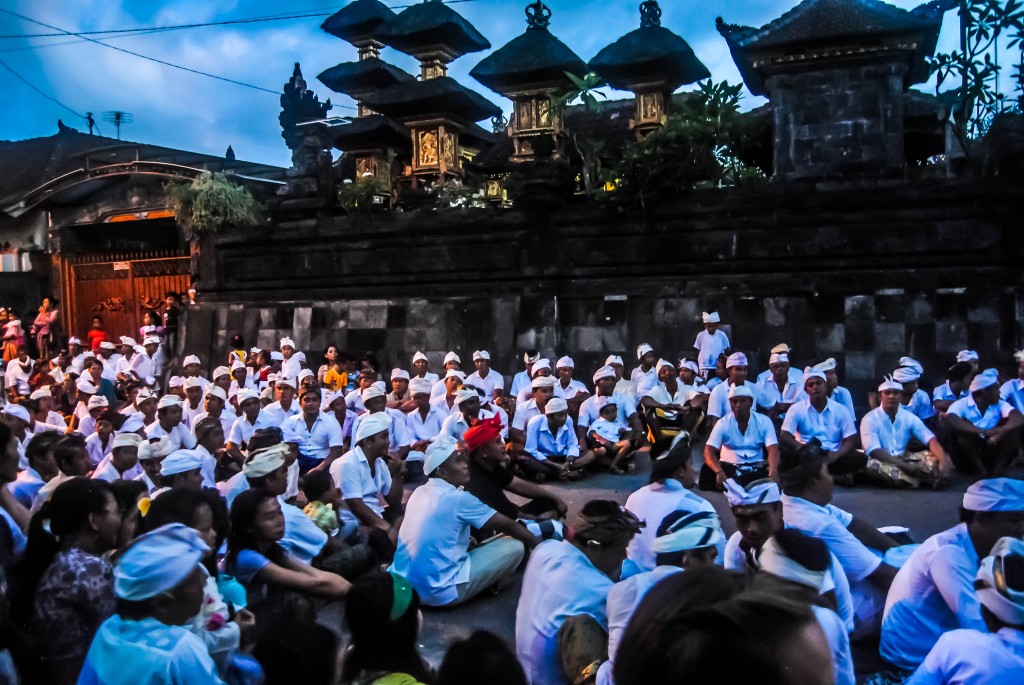 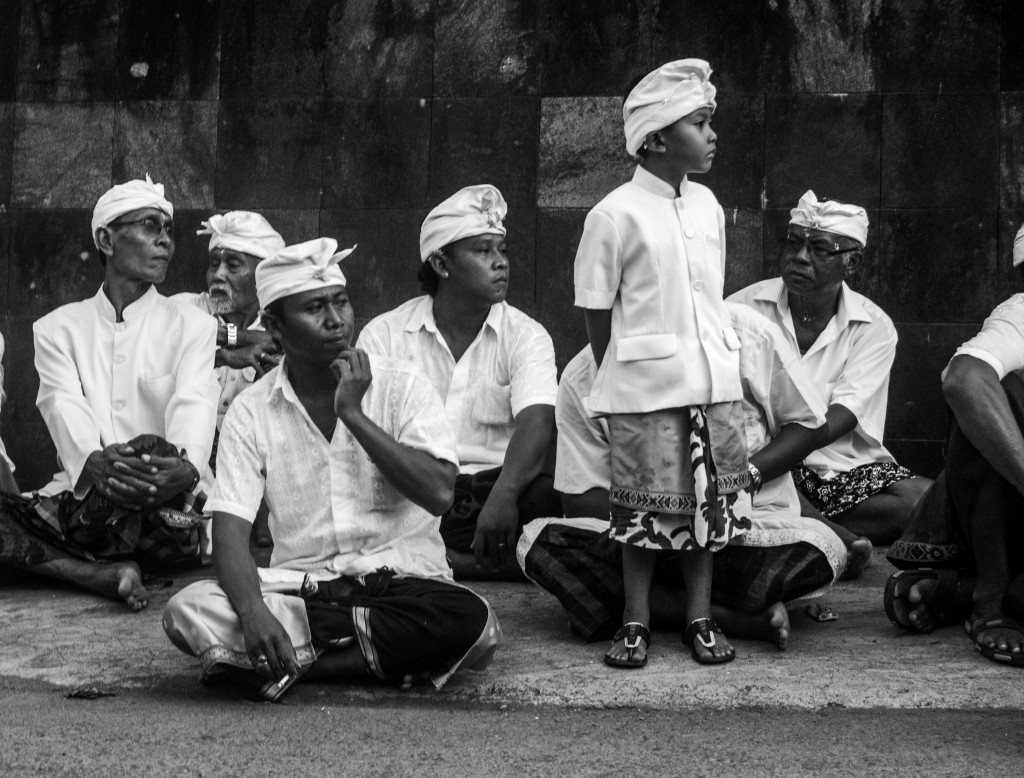 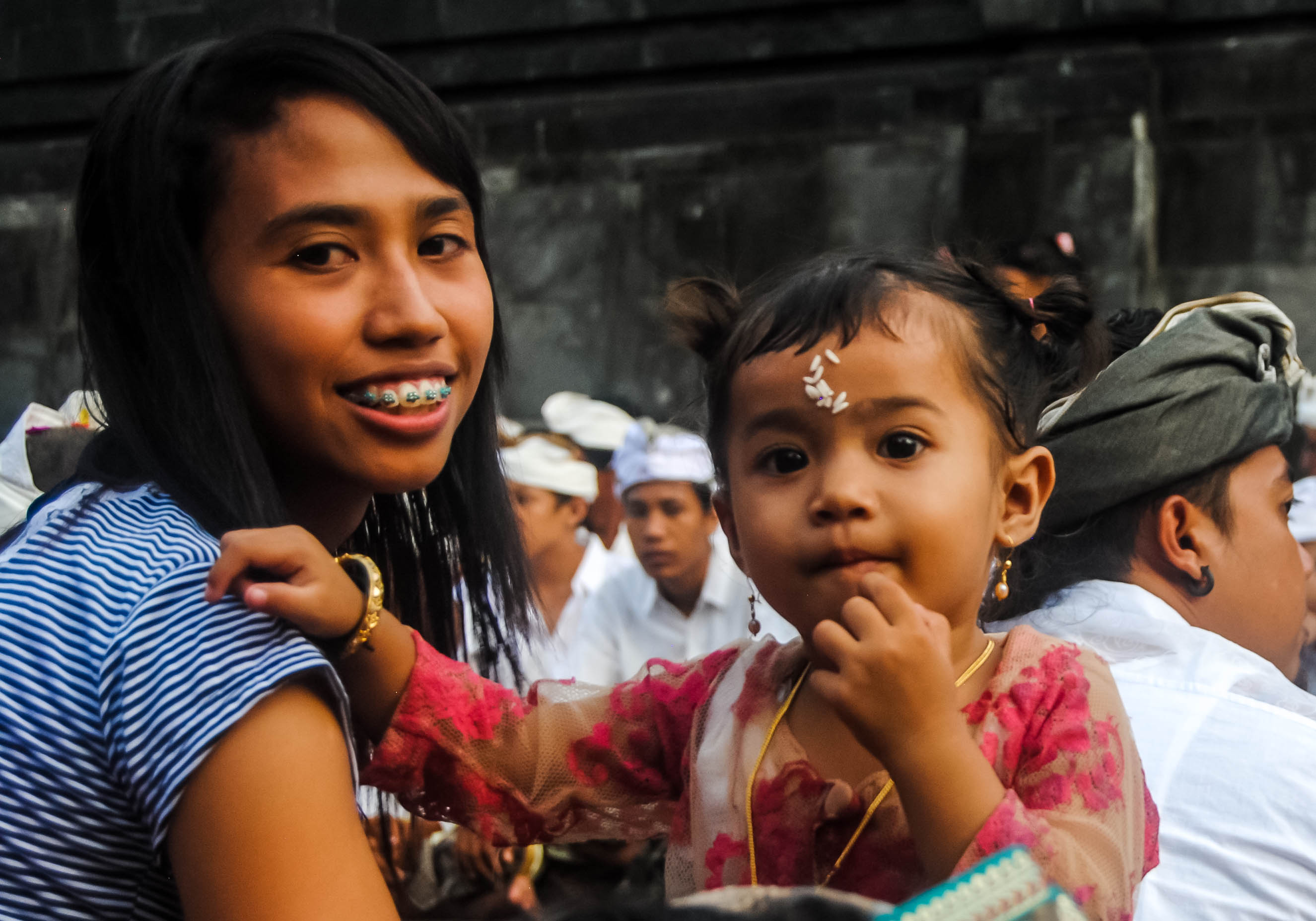 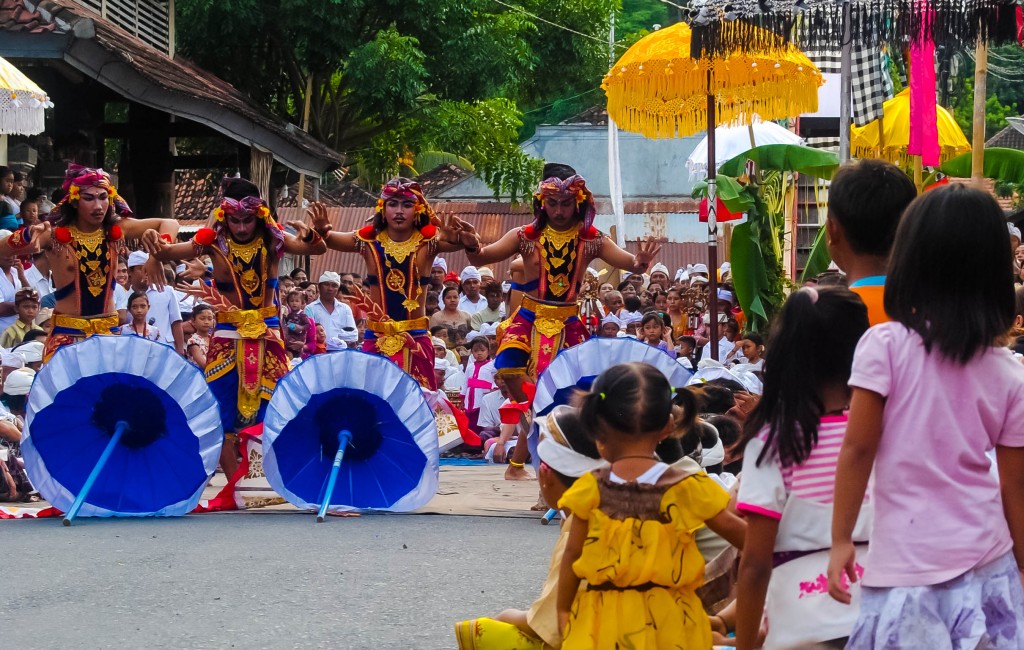 Now we had already seen numerous Barong dances before arriving in Padangbai, a favorite being in Ubud. So when we heard we would have the opportunity to see another one, we weren’t all that excited. I mean, it has got to be like the Harlem Shake—once you’ve seen one, you’ve pretty much seen them all, right? 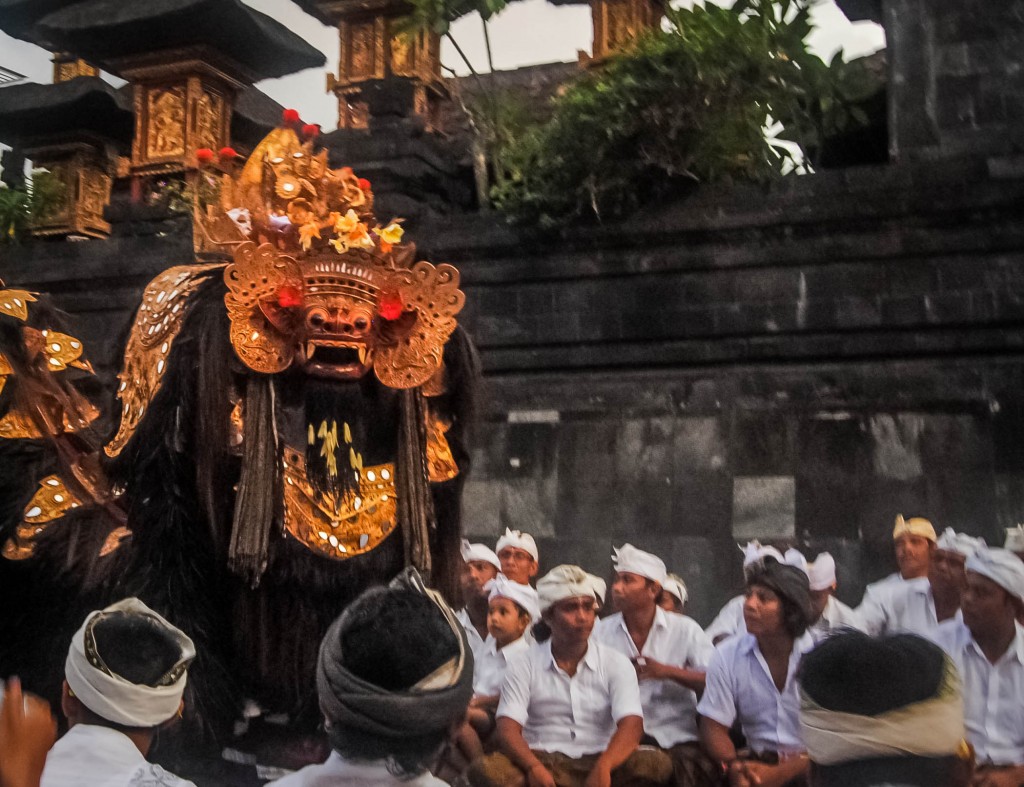 Wrong. Especially when it is a local, religious ceremony; then it’s still an entertaining performance but with a much deeper, spiritual purpose. As it turns out, our previous encounters with Barong had left a crucial element out of the tourist driven performances: exorcism.

But before we get to the juicy stuff, here’s a summary of the story of Barong, according to Balinese mythology. Don’t worry, it’s quick.

Barong dance portrays an epic battle between good and evil, a similar concept in most world religions. Barong, often depicted as a lion, represents ultimate good. In contrast, Rangda is an evil witch, or demon queen, skilled in black magic. Does this not already sound reminiscent of a certain Narnia plot? Unfortunately, after that, it gets a bit more complicated. The Barong appears on the stage, accompanied by monkeys, which are historically associated as helpers of the Barong. (This could be why there are so many monkeys still found at Balinese temples. That or all the free bananas they receive from the tourists…) They dance around happily before the malicious Randga makes her appearance, attempting to cause harm to the Barong, at which point the battle between good and evil begins. 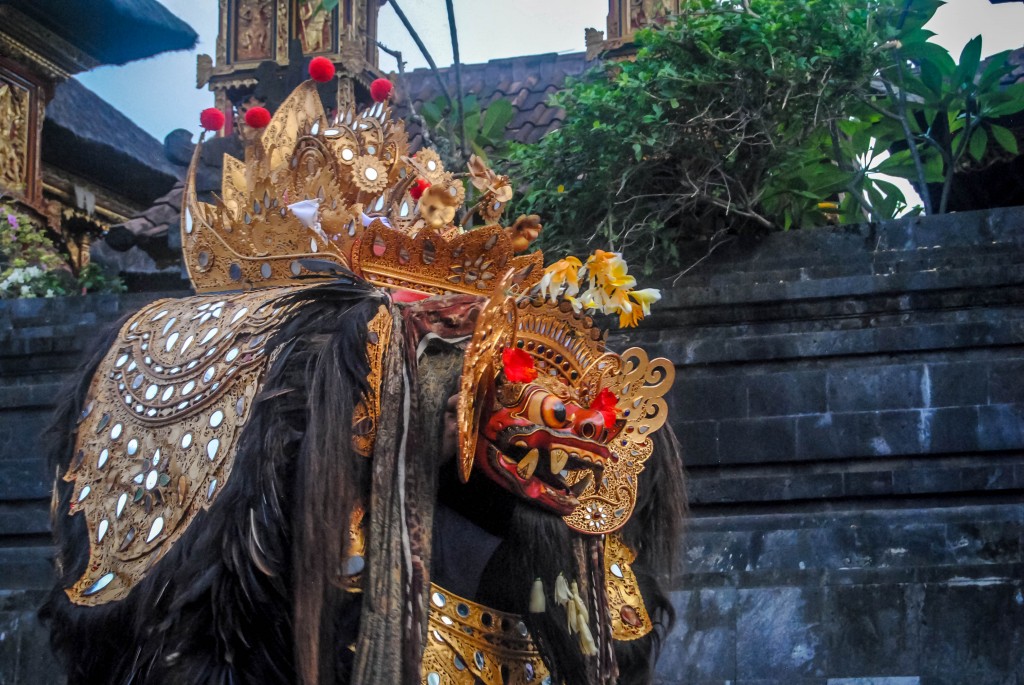 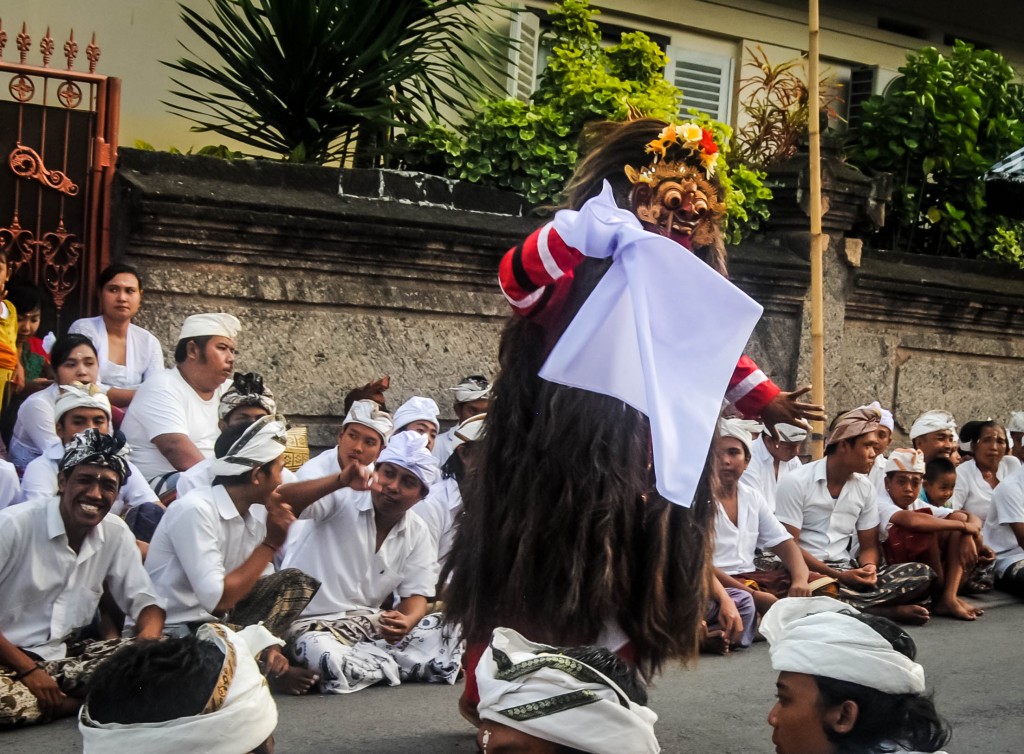 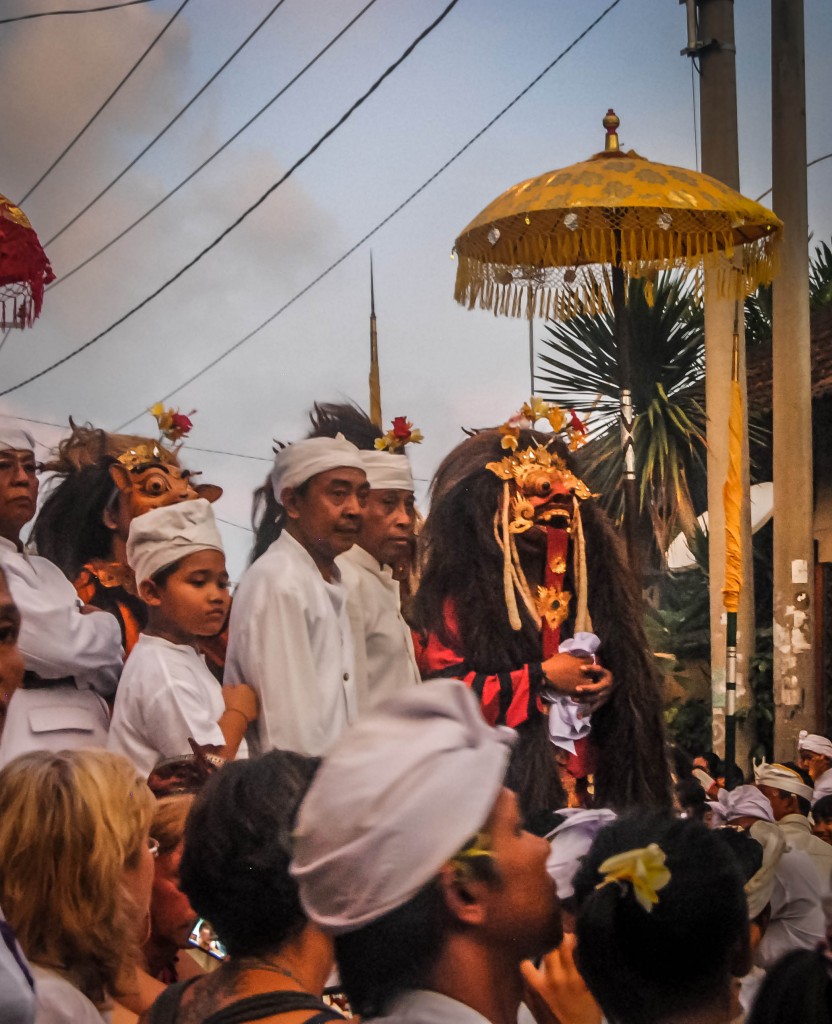 This is also the point where things in the audience start to get…well…interesting. Just to reiterate, this wasn’t a performance for tourists. It was an authentic religious ceremony to balance the level of good and evil in the local village, Padangbai. As such, the performance involved personal purification as well. We didn’t really realize that at the time, and it took much clarification from our friendly Balinese bartender later that night to understand what was happening. But as I was saying, this is when the audience really started to get going, and Dan and I simultaneously started distancing ourselves from the crowd. It’s also the point where people started to become possessed by the evil spirit of Rangda. It came on slowly, and of course the first person to feel the ill effects was literally seated one foot away from us. The young man, who appeared to be in his twenties, spontaneously began wildly thrashing around while screaming out in incomprehensible pain. His buddies nearby quickly pinned his arms and legs to the ground as he struggled with what appeared to be pure hysteria. Dan and I had no idea this was coming, and as we dodged to avoid his flaring fists, we were astonished to hear the sounds of laughter in the air. Looking around, we could see local women and children enjoying the scene, apparently not phased by it all. Okay then, nothing to worry about. Maybe it’s just this guy’s charming personality. But as the show continued, more men systematically began to fall prey to the spirit of the Rangda. Before we knew it, the crowd had divided into groups, with the women and children standing about the same place as Dan and I, and the men huddled in circles of ten while attempting to restrain their possessed companion.

Now, all the dancing was still going on at this point in time. But somehow while fearing black eyes from stray fists we got a bit distracted (imagine that happening, eh?) Suddenly the costumed dancers had exited the stage and the ceremony appeared to have ended. The men who were possessed were quietly helped up, a handful of the women and children began to leave, and the few other tourists present could be heard chattering about what possibly could have been going on. We were just about to make our exit when we noticed a couple lines forming. It wasn’t long before we also realized bundles of sticks were being set ablaze and a new crowd had formed, circling around the priest holding the glowing branches. It was time for the actual exorcism to take place! The spirit of Randga was still very present in the possessed men, and craziness seemed to ensue. Holy men from the temple, with their heads wrapped in white and their bodies covered in sarongs methodically began forcing arak, the local liquor, into the mouths of the distraught men. This seemed to only make their case worse as now they were obsessed with the nearby flames. Their fellow villagers finally let them loose to run towards the fire where other holy men were waiting to beat them with the torch, although apparently taking care to hit them on places that would do no serious harm. The fire then appeared analogous to the evil spirits, for after the first was extinguished, the second followed suit. One by one the spirit of Rangda was exorcised, and the balance between good and evil was restored. The exorcised men collapsed quietly to the ground, understandably exhausted from the spiritual war that had taken place inside them.

We were quite taken back by this ceremony, and unsure what to make of the events that had transpired. Specifically, we couldn’t be certain as to whether those who had been overcome by evil spirits were just acting. Had they previously decided to become ‘possessed’? It seemed a bit odd that those who did feel the effects were spaced so evenly across the crowd, with a group of friends nearby to respond to their frenzy immediately. Or did they just know that they would feel Rangda because of some bad occurrence in their life that needed to be sorted out? Over our own glasses of arak later that night, we spent a long time talking to our Balinese bartender about the ceremony, asking him these very questions. While he was able to clarify a little, he also couldn’t be certain. However, he did emphasize that it wasn’t a joke or an act. Perhaps those who became possessed did know it would happen prior to the Barong dance. Or maybe not. But this question didn’t seem of importance to him, or any of the other locals we asked—quite a contrast to Western culture. Ultimately, it seems left to believe what you would like about the performance and the evil spirits present.

Have you seen a Barong dance that included the exorcism ceremony? Any similar experiences? We would really love more knowledge about the events we witnessed.

Gili Islands, Indonesia
A Guide to the Stepping Stones
of Lombok