Dan doesn’t normally help too much with writing the blog posts because he ‘claims’ he’s no good at it. Which is a shame, because we all know he is absolutely hilarious. Normally he will oblige me by going back into the posts and adding his own zingers here and there. For Yogyakarta he’s done the same; but now we’re mixing it up with a bit of I Spy Dan’s Writing. See if you can’t find which parts he wrote in his oh-so-Dan-style. 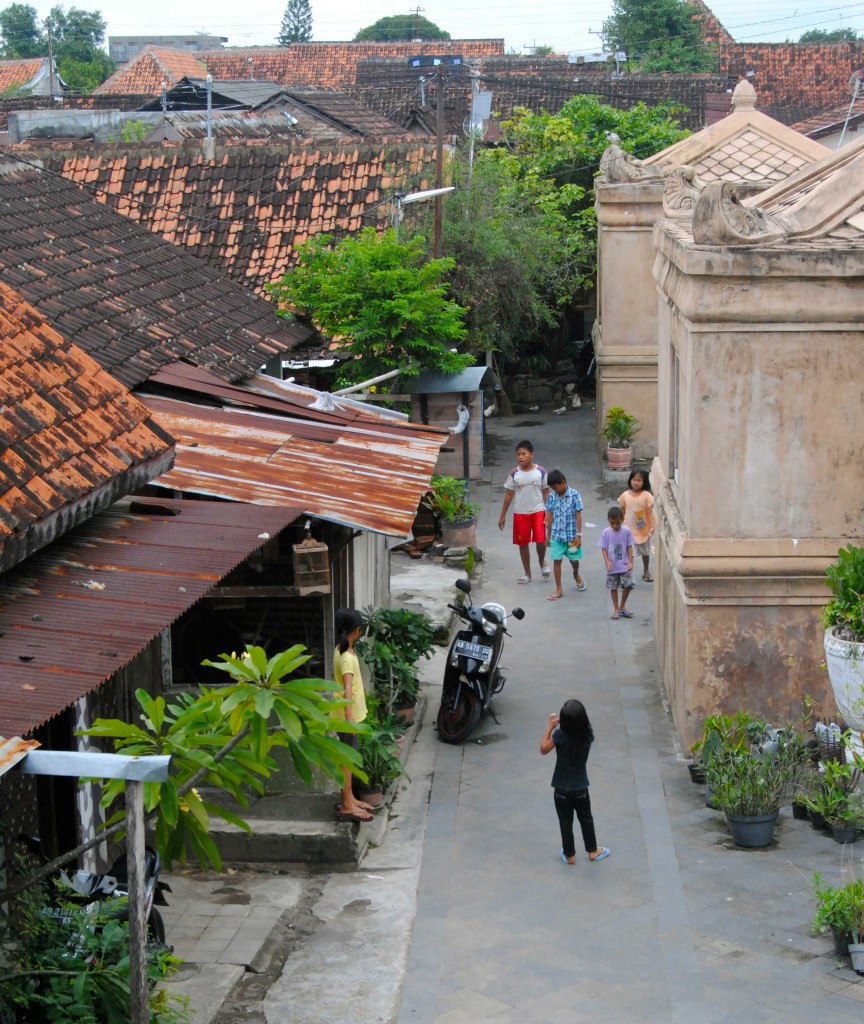 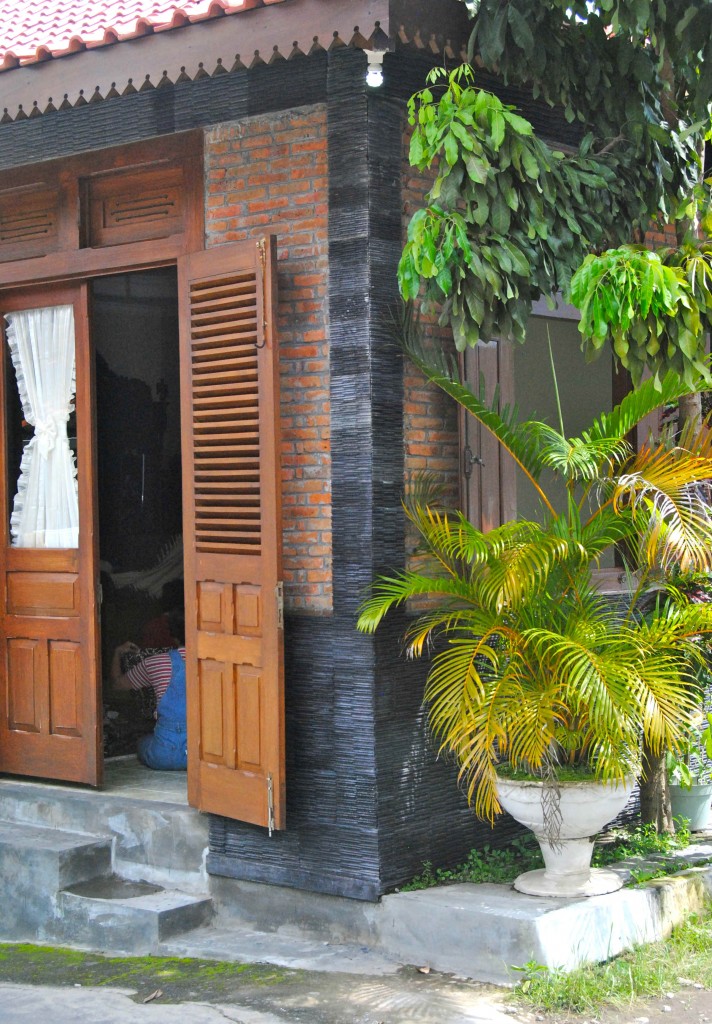 Yogyakarta (Jogja) is a small city in Java, often referred to as the arts and cultural capital of Java. It’s a hub for tourists that make it their base for the famous temples Borobudur and Prambanan, as well as those booking tours to head east to Mt. Bromo. (Just like us.)

Jogja has a lot to offer visitors within the confines of the city, though we found most of these things doable in one day. 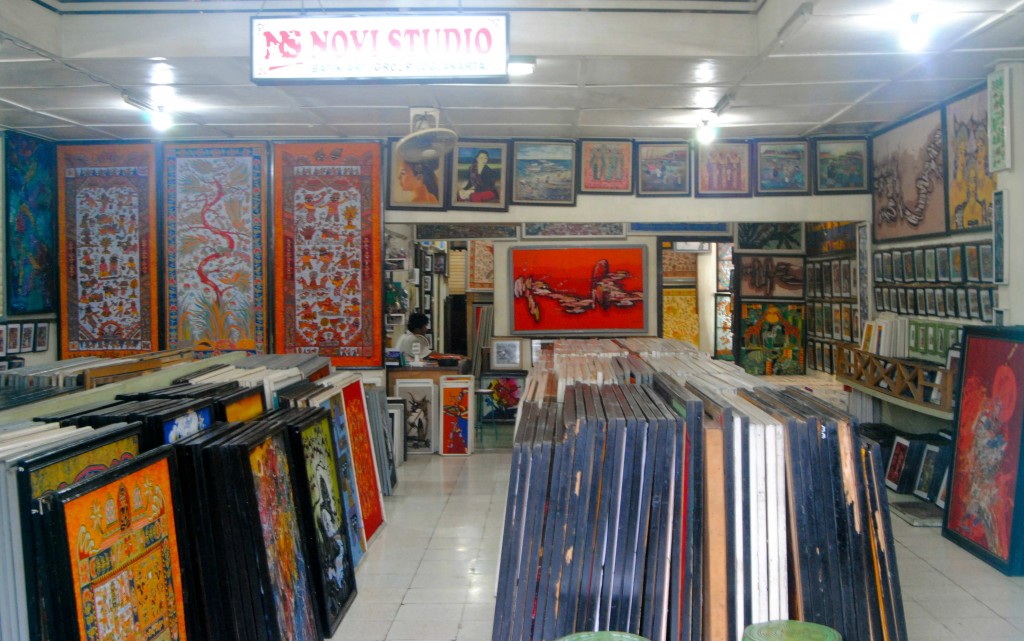 Everywhere you turn in jogja, someone will be trying to sell you batik. If they aren’t outright selling it, they’ll be referring you to a friend’s shop down the road where someone else will be trying to sell it. They may even try to sell you a washer and dryer before directing you to the local batik art shop. Of course, that was where we found the best selection: Jogja Art Group. Everyone knows it, including the appliance shop owners nearby. You might hear that the Yogya Art Group is only open certain days of the week, but we’re not sure if this is accurate or just a way to get you to shop immediately. Nonetheless, if you find it open, go inside. There you can watch a batik demonstration, where the owner will explain the process of dying the fabric, coating the areas you don’t want re-painted with wax, and then dying the fabric again. This process is repeated over and over until the desired picture is achieved. 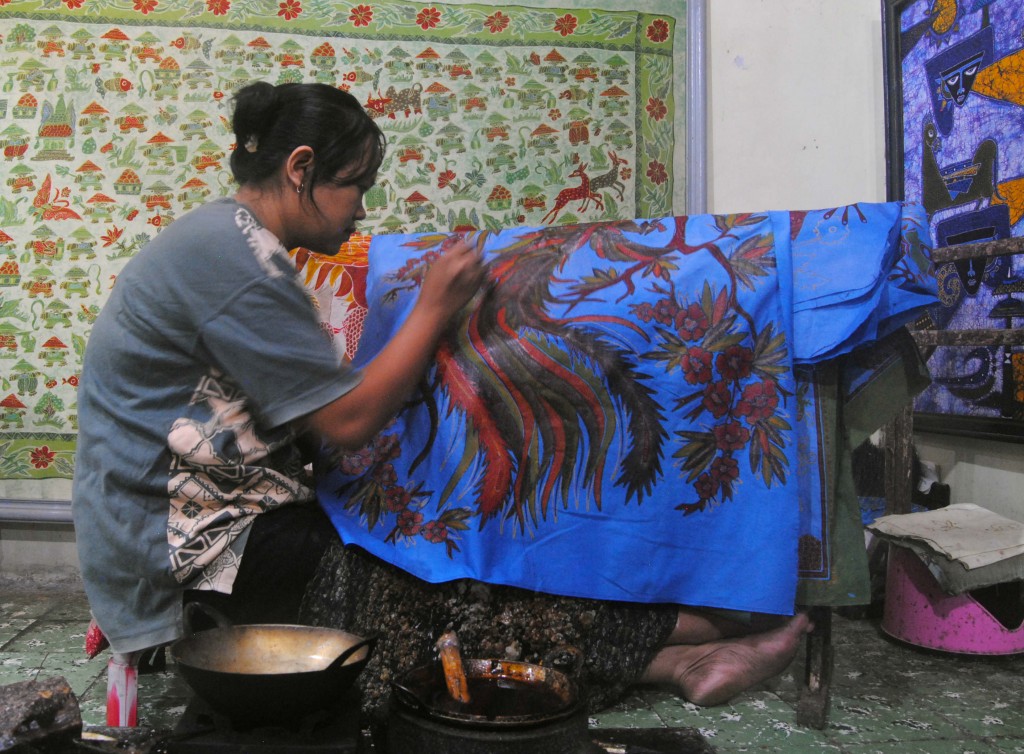 Although the demonstration is interesting, obviously the best part is actually shopping for the batiks. Dan and I don’t collect much when we travel, but we have taken to buying art to display in our home one day. Batiks are perfect for this as they easily fold up. When you are ready to display them, just get out your iron to get rid of any creases and there ya go. So here it is: the scam. There are lots of people in Jogja selling printed batiks. Apparently there are two ways to tell if it is handmade:

1. Look at the back. It should look the same as the front.

2. Put it in water to make sure the paint doesn’t run.

I’m no Batik expert, but they all looked pretty good to me. The prices are pre-marked according to the painter (student or master), which keeps the sellers from charging absolutely extortionate prices, but we found you could still negotiate a bit. We ended up leaving with three batiks I absolutely adore for what I found to be very reasonable prices, especially after watching all the time and effort that goes into creating the works of art. Are they actually authentic? We’ll probably never know. We’ve heard mixed things from the Jogja Art Group, but we’re really happy with what we bought and I guess that’s all that matters.

If the previous paragraphs of our batik experience are a bit too lengthy for you, feel free to just read this eloquent summary: Practical and picturesque, these precious pretty portraits prices are profoundly painless on your pocket. Public painters in the proximate population prepare every part of every painting. The paint on the paintings is painted with protective wax, to protect the paint. We promptly picked a pair Pablo Picasso (or possibly Peter Piper) would be proud of. 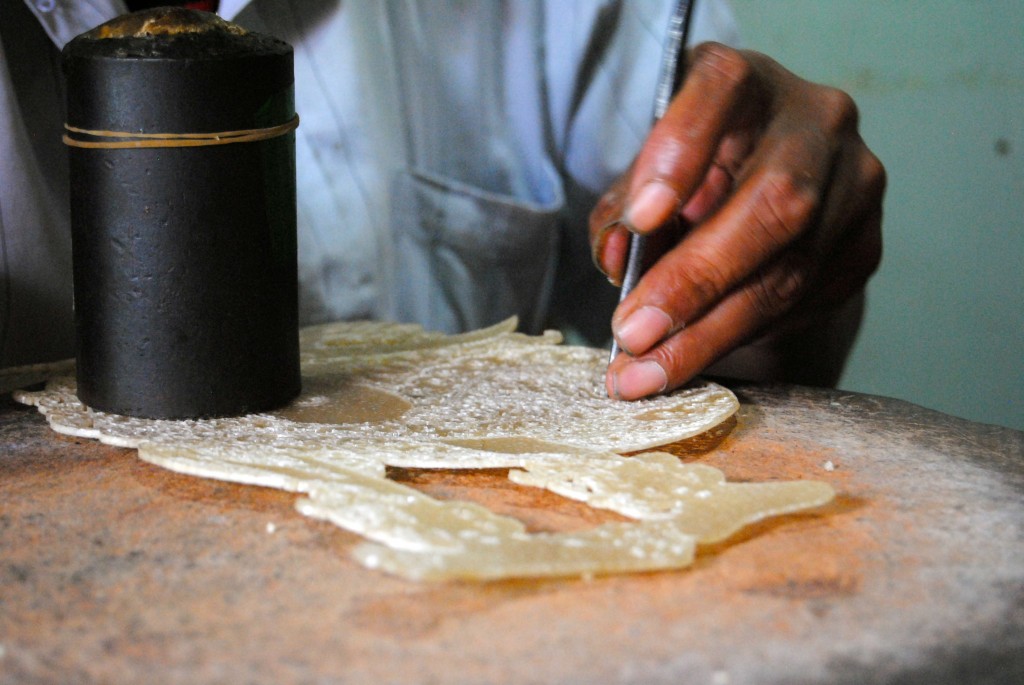 I’m not really a puppet person. Actually, I don’t think I know anyone who is a puppet person. But the puppets you’ll find in Yogyakarta are just plain cool. Shadow puppets are an ancient Indonesian form of storytelling, consisting of wooden puppets maneuvered behind a shadow screen, with accompanying gamelan music. The puppet shops are almost as common as batik, and you can also find a puppet making demonstration in most of the shops. The process looks like it requires painstakingly steady patience—something I definitely don’t have. To make the handcrafted shadow puppets, the artist begins with a piece of buffalo skin. After it is cut to the desired shape, various sized chisels, which are recycled from old bicycle spokes, are used to ingrain intricate and delicate patterns. On the bottom third of the puppet, near the feet, you’ll find four different patterns that represent the four elements of nature: earth, wind, water, and fire. With their powers combined, they continue up to the middle portion of the puppet, where you would find the heart. Here the patterns change to resemble the rising and falling of human emotions. Finally, the top portion of the puppet contains designs that signify the crown of knowledge. After the chiseling process is finished, the painting can begin. It’s another tedious task that results in a beautiful, intricate, one-of-a-kind puppet. 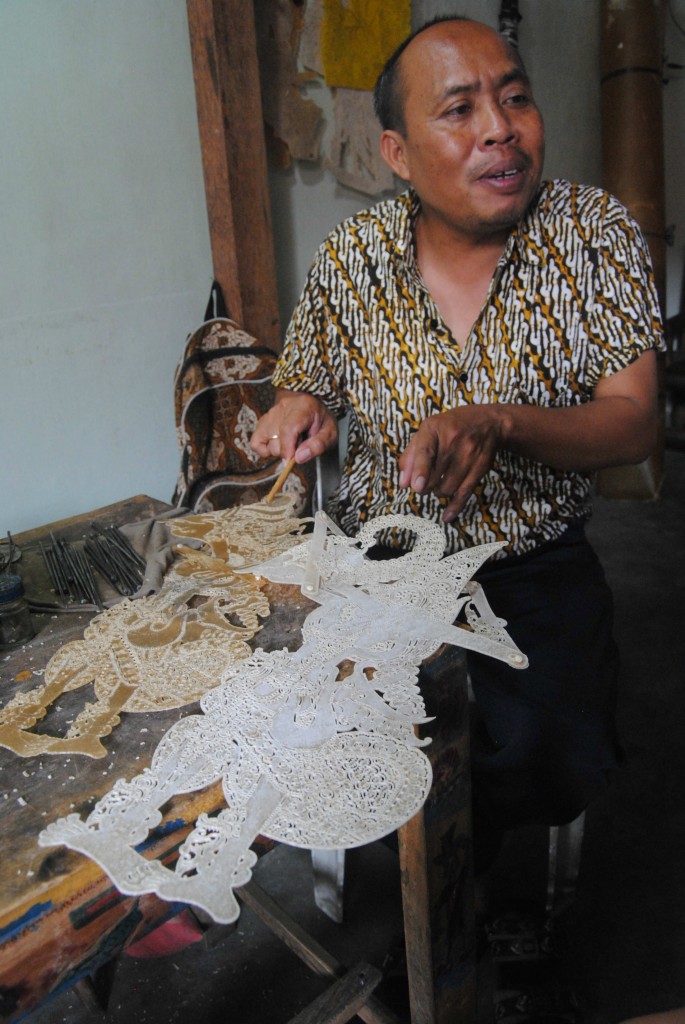 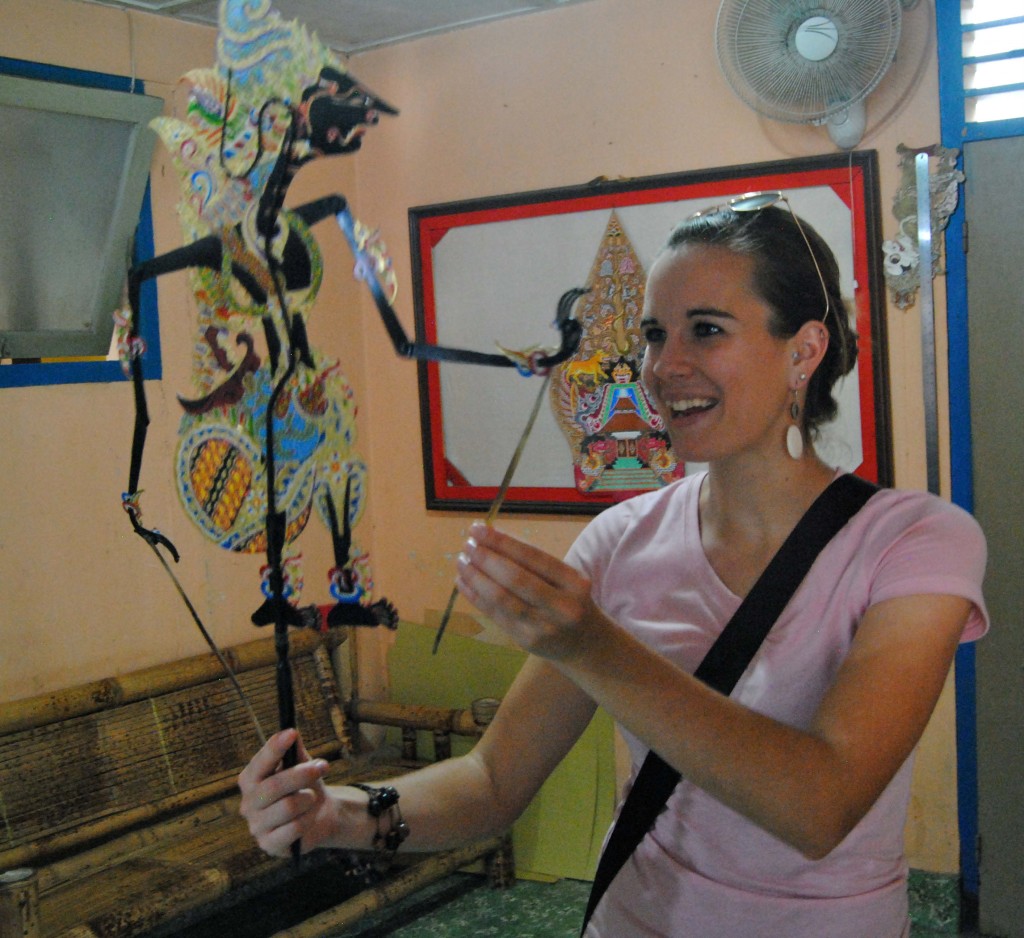 After learning all about the shadow puppets, we recommend seeing an actual shadow puppet performance. They are held every night of the week (except Sunday) outside of the Sonobudoyo Museum for a mere $2. The cool thing about these shows is that the stage is 365 degrees. You can sit and look at the shadow puppet show, then walk around to the ‘behind the scenes action’ where a gamelan and live singers are set up. This is especially neat during the puppet fighting scenes when the puppet master is twirling the puppets around his head and throwing them into the air. It’s not exactly a heavyweight championship, although we would love to see a crowd out of their seats cheering and jeering for puppets. If you do attend a showing, be aware that it is two hours long with no English translation. We had no idea what was going on during the performance, so we left after about an hour, which appeared totally acceptable. 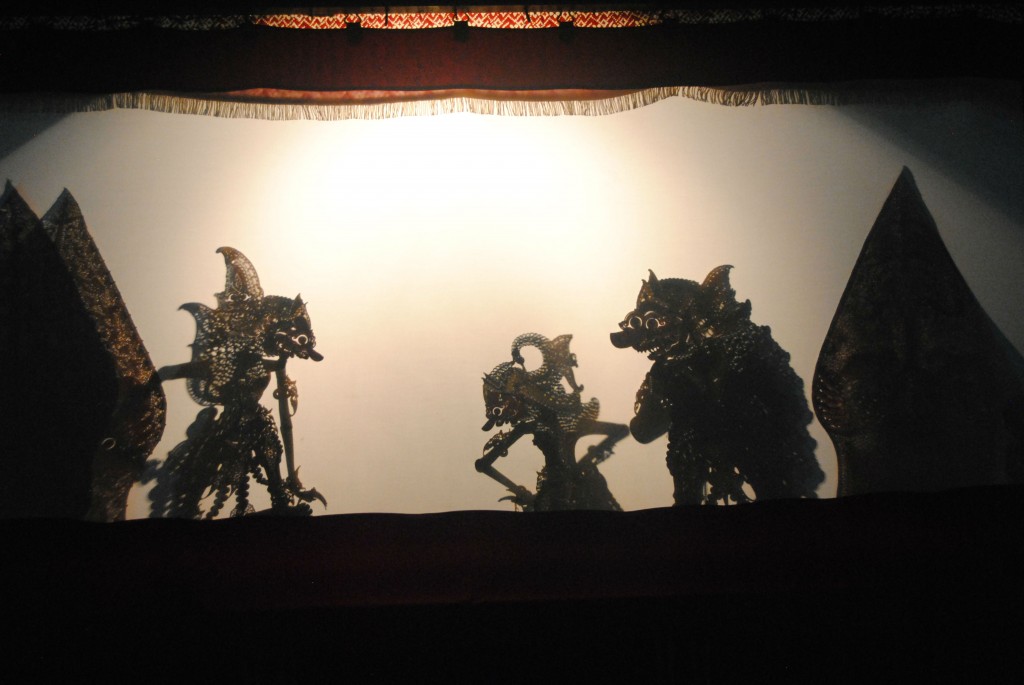 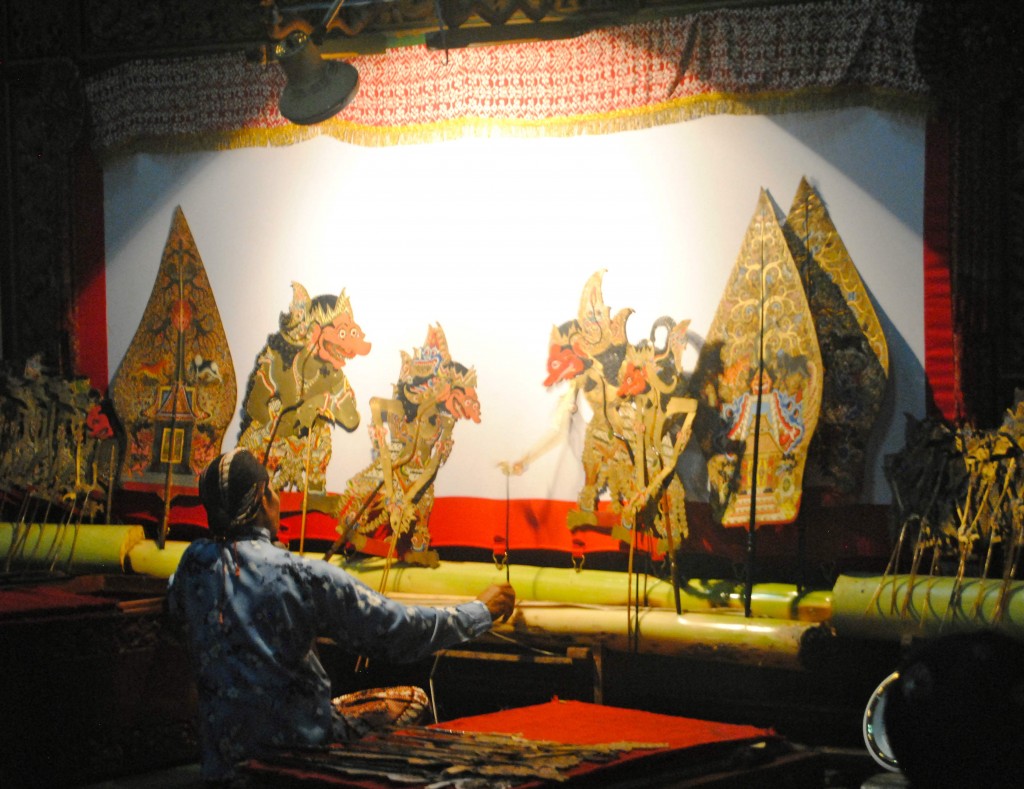 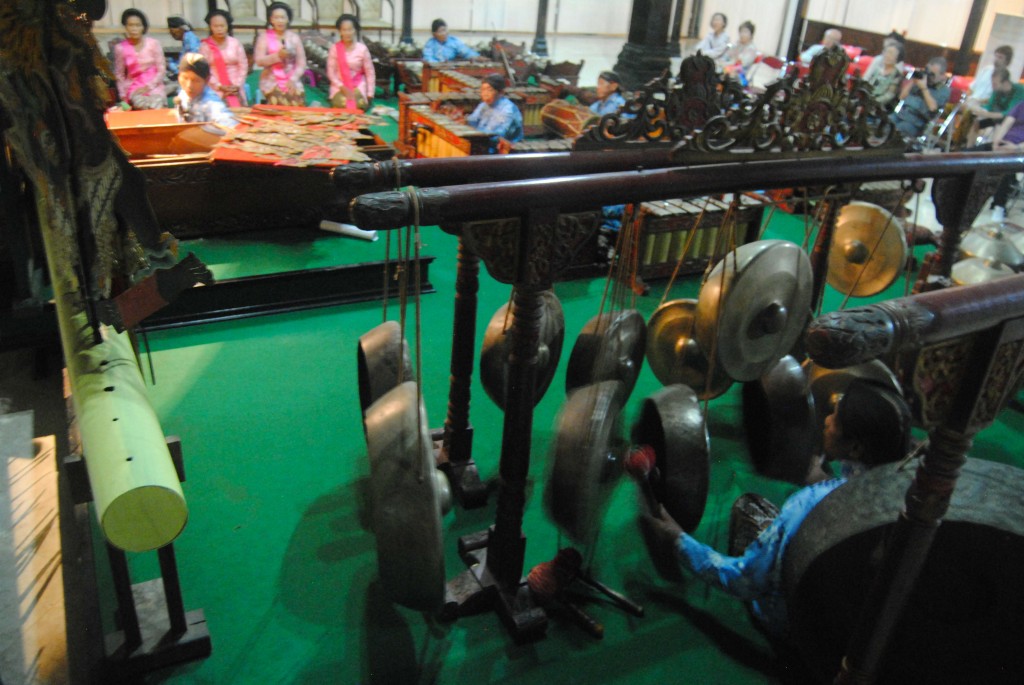 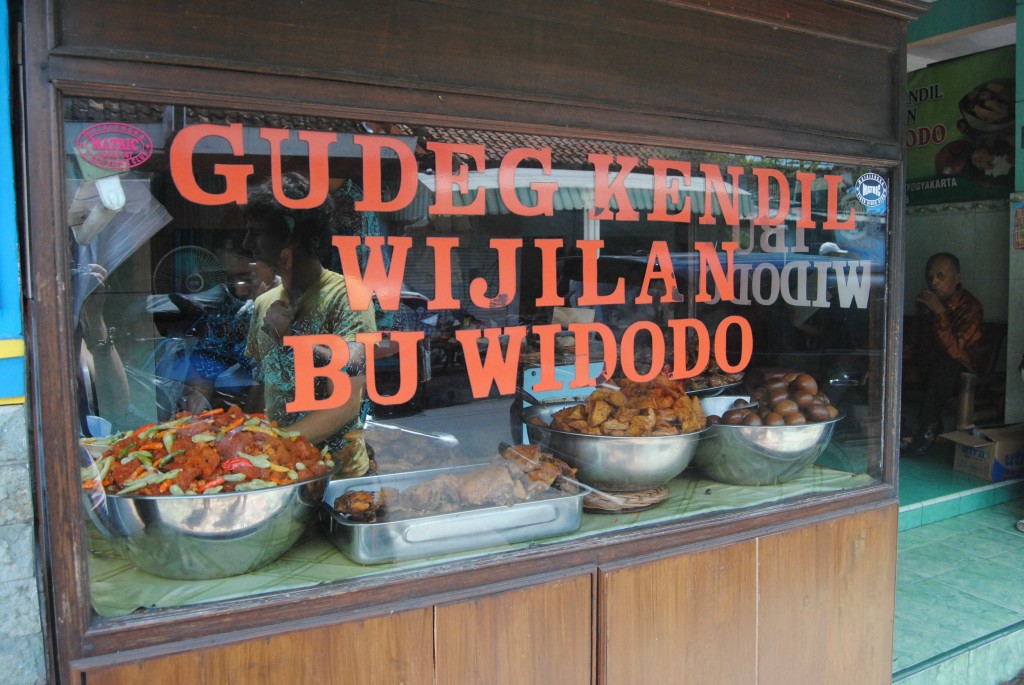 I love food. It’s seriously one of my favorite things about travelling. I especially love eating new food in a small, cheap restaurant crowded with local people. We struck gold in Yogyakarta with Gudeg, a dish distinctive to the Javanese city. It doesn’t look all that appetizing at first. Most of the colors on the plate are actually of a brownish hue, and the only thing we could initially recognize was a chicken thigh. We skeptically followed the ‘at least one bite’ rule, and were quite impressed by what we tasted. It was actually like nothing we had ever tried before. Gudeg is primarily made from jackfruit that has been boiled for several hours with various seasonings, and is served with rice, chicken, hardboiled eggs, tofu, and crispy beef skins. 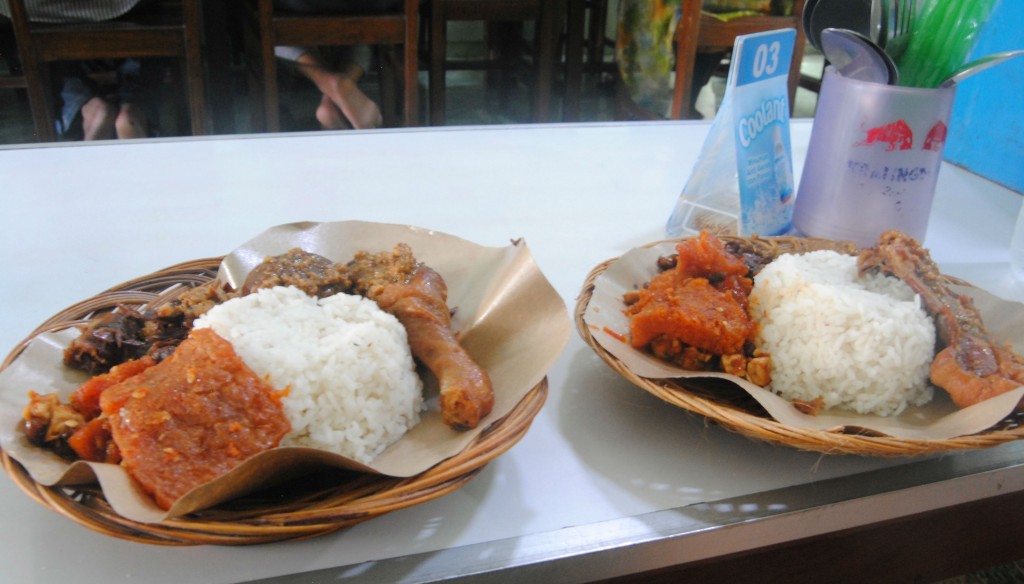 I don’t know Jack, but he picked a hell of a tasty fruit.

Strolling About the Sultan’s Palace 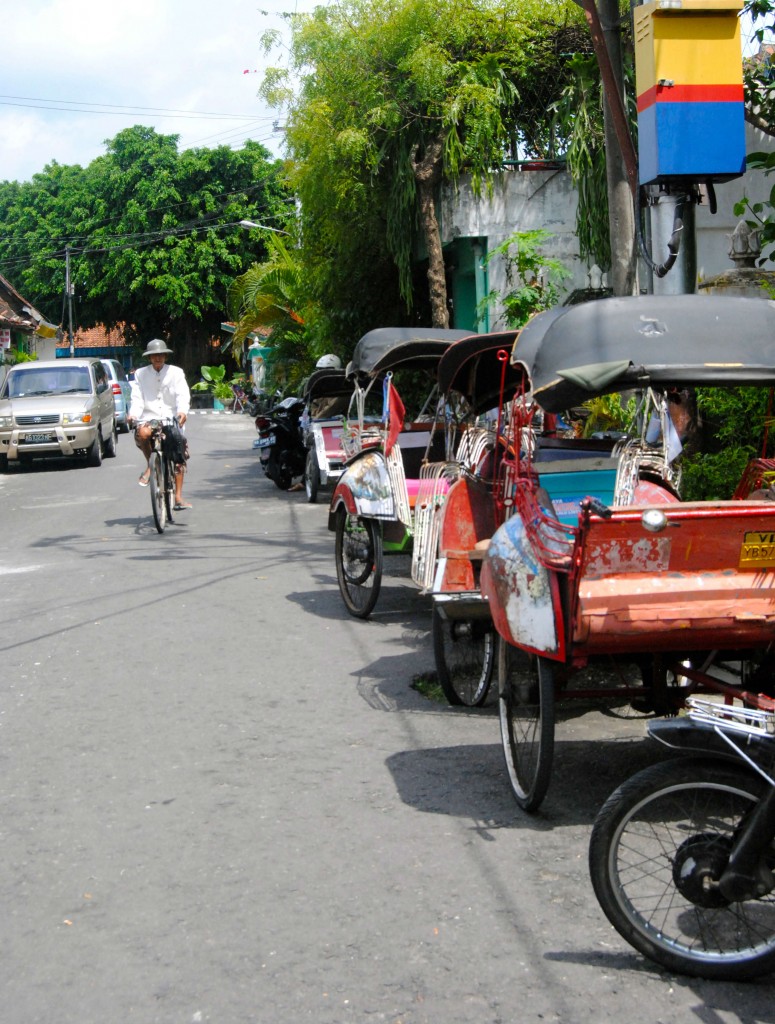 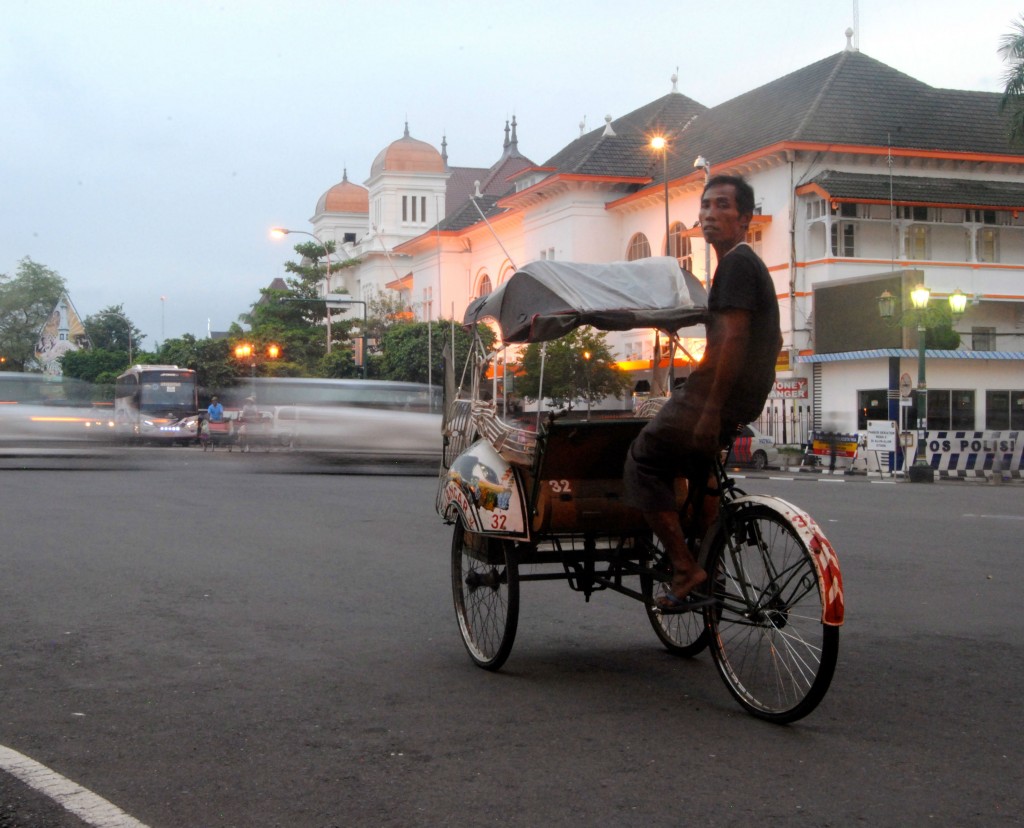 For those who are unfamiliar, sultans are short, fat kings who have friends with magical powers, talking animals and know big blue genies. Yogyakarta just so happens to have its own sultan’s palace. While we didn’t pay to go inside, we did spend an afternoon getting lost around the area. There are beautiful side streets off of chaotic city roads, as well as a mini-fair with loads of local foods to try. It can be quite an exotic experience walking this area amongst the loads of rickshaws and horse carriages while hearing islamic chanting from the mosques, all the while smelling the spicy, deep-fried street food. Although contrary to what you might think, it’s a refreshing contrast to the main tourist street where the foreign hostels and restaurants are primarily located.