43 million people visit Las Vegas every year, putting more than $35 billion into the local economy. This covers everything from gaming to shows and from hotels to all you can eat buffets.

Las Vegas offers countless activities to cater for every taste and budget. Another thing the city has a lot of is white knuckle attractions and activities that’ll get your adrenaline pumping. There are few other cities in the world with so much variety in one place.

Casino games are what Las Vegas is most famous for. Of course, you don’t have to play them when you’re in the city, in fact, many choose not to. However, it was originally built around the idea and is a big driver of tourists. If you’re looking for a Las Vegas activity that’ll get your heart racing, there are few better options than playing casino games.

You don’t need to be a high roller either. The average tourist spends a little over $500 during their trip, but it’s still possible to have just as much fun with a fraction of that.

Most of the famous casinos have the same great range of games, including blackjack, roulette, dice, baccarat, and slot machines. Most also have poker rooms where you’ll find a selection of different variants to choose from.

Roller coasters will expose you to the extreme G-forces that are still safe, yet quite baffling. In Las Vegas, several casinos have built coasters to broaden their range of attractions.

One of these is Big Apple Coaster and is likely the most photographed coaster in the city thanks to its prime location outside the New York-New York Hotel and Casino. Riders sit inside New York cab-styled cars and are hurtled along the track past famous Big Apple landmarks like the Statue of Liberty.

It’s undergone a few modifications over the years to reduce a painfully rough ride. It now also has an optional VR experience where you’re given a headset that’s synchronized with the ride.

Another roller coaster is X-Scream at The Strat. The unique coaster has been constructed on top of an observation tower. Unlike traditional coasters, you don’t travel down steep dips or around fast sweeping turns. Instead, riders strap themselves into the train before a single piece of steel track pivots up and down like a see-saw.

As it does this, the car rolls along the track at speeds of up to 30 mph. It creates the sensation that you’ll fly off the end, with the track already protruding over the edge of the tower.

The Strat has several other thrill rides that involve you being fired into the air or dangled off the side. 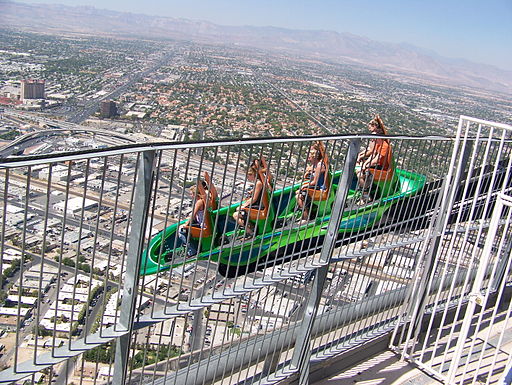 Other coasters you may want to consider are the 55 mph Canyon Blaster at Adventuredome and the Desperado hypercoaster outside the city.

If you prefer to be in control, then what better way to get your kicks than by driving exotic supercars around a professional racetrack?

SPEEDVEGAS has a purpose-built racetrack that combines many different features, including sweeping S-bends, a long straight, and some tighter curves. This 1.5-mile long circuit is the longest in Las Vegas and goes through 60 feet of elevation change, creating undulation that makes driving more exciting.

Choose from American muscle cars like the Shelby GT 500 or European supercars like the Porsche 911 and the Lamborghini Huracan. If you want something a little bit different, you can opt for a monster truck or an APC Tank.

As long as you’re over 18, you have a driving license from whichever country you live in, and you’re wearing shoes that cover your toes (and other clothes, of course), then you can take to the track at SPEEDVEGAS.

Prices vary depending on the car(s) you drive, but start from as little as $99 and can go into the thousands. You can also pay for extras like professional photographs, in-car video recording, and more.

Whatever you’re into, Las Vegas has activities to satisfy even the most extreme thrill-seekers.