The essence of Las Vegas resides in it famous Casino Hotels which tend to dominate the place. There are many different styles which appeal to many different kinds of taste, so here is our pick of some of the top ones. 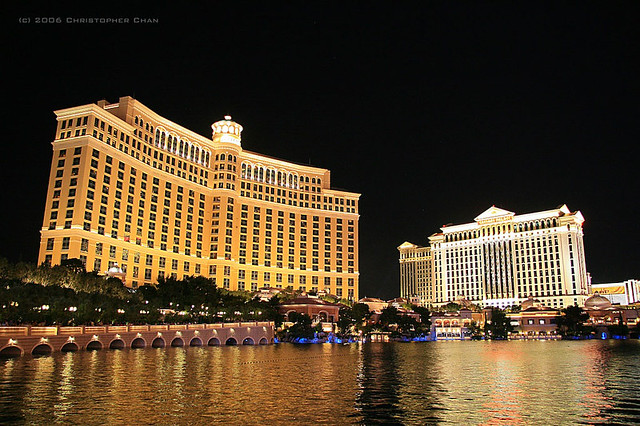 For many people the Bellagio is the best casino in Vegas. Owned by MGM Resorts International, it was built as a replacement of the Dunes hotel and casino which was demolished to make place for it. It is named after the Italian town of Bellagio which is close to Lake Como and one of its most famous features is a huge lake that lies between the front of the building and The Strip and which contains the Fountains of Bellagio, a huge light sound and water show. Another famous feature is the Dale Chihuly’s Fiori di Como in the entrance which consists of 2000 glass flowers, all individually blown. The hotel has over 3,000 rooms over 36 floors with almost 1,000 rooms.

The Mirage is probably the best casino for lovers of Roulette, as t is one of the few casinos in the city that use a European roulette wheel rather than an American wheel. The difference is that the former has just one zero slot while the latter has two with the effect that the house edge is reduced to around 2.6% from 7.4%, a big difference if you play frequently.

If you are up to some proper gambling and high stakes action, then your casino of choice should be Caesars Palace. It has a great Strip location and a fabulous 4,200 seat Colosseum which hosts some to the best stars currently around. This is probably the most expensive Vegas casino, but you won’t find better service anywhere.

With the rise of sites such as MobileCasino.co.nz coupled with a year on year increase in people choosing to travel, it looks like the lights of Vegas will be shinning on for some time.