The Amazon may get all the hype, but the world’s largest tropical wetland, the Pantanal, boasts some of South America’s finest opportunities for spotting wildlife—including the ever-elusive jaguar.

Never the best at having to choose, we strategically opted to base ourselves in the Brazilian city of Cuiaba; this easily allowed us to visit both the Southern Amazon and the Pantanal in the same trip. And honestly, we couldn’t have planned it any better. Not only did we get an iconic Amazonian adventure, but we also had an intimate encounter with a jaguar that was unlike anything we could have imagined. A Journey Into The Pantanal

Our journey into the Pantanal began when Junior from the Jaguar Ecological Reserve picked us up in Cuiaba. Still groggy from our overnight bus trip, little did we realize that half of the adventure would be arriving at the lodge! 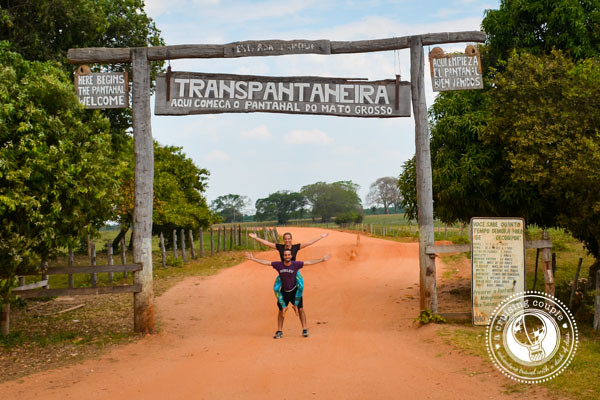 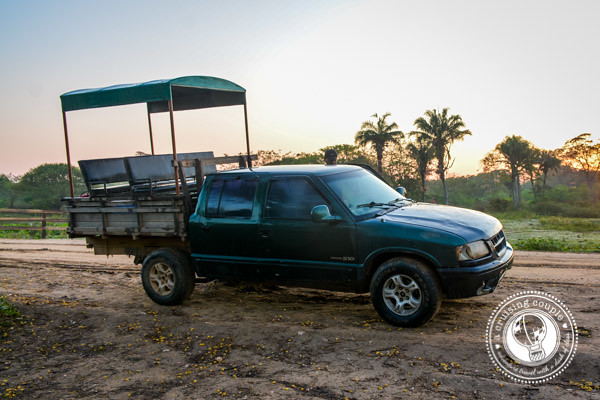 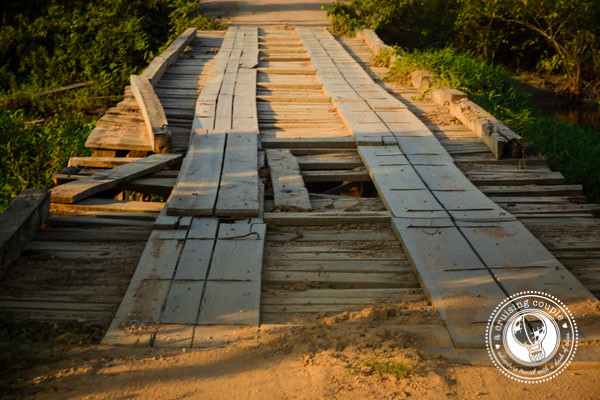 The Jaguar Ecological Reserve is one of the last lodges along the Transpantaneira, a 146-km dirt road crossing the Pantanal. In between driving around potholes and crossing the 120 rickety wooden bridges, the journey took a total of four hours. But we had plenty of entertainment as we bounced along on benches from the back of the rustic pick-up truck. We would tap on the back of the truck anytime we wanted to stop and whip out our cameras and binoculars. When we saw storks, hawks, foxes, macaws, deer and toucans in the first hour alone, we realized we would have to exercise a bit of discretion in stopping the vehicle if we were ever to arrive at the lodge. 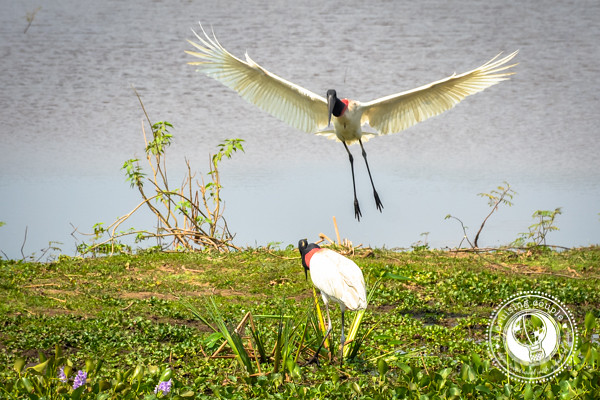 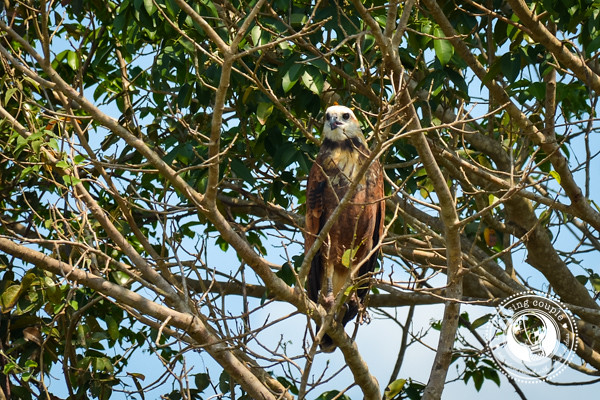 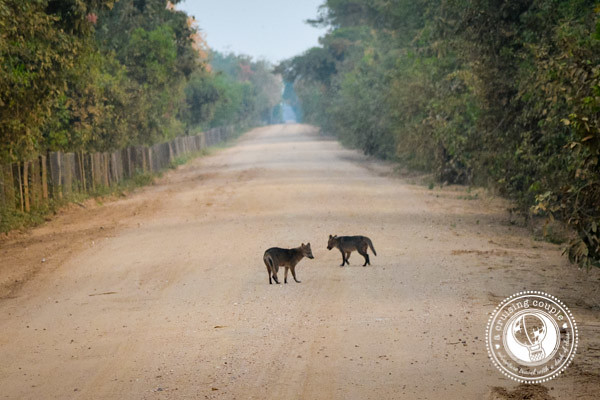 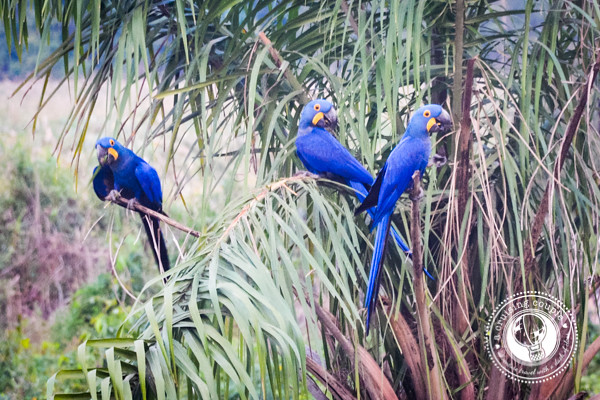 We arrived at the Jaguar Ecological Reserve just as the sun was setting. We had been in transport for essentially 24-hours at this point, and even just staying awake through dinner proved to be a challenge. And though we had thoroughly enjoyed driving the length of the Transpantaneira, the real excitement would begin the following morning at 5am when we set out to search for jaguars. 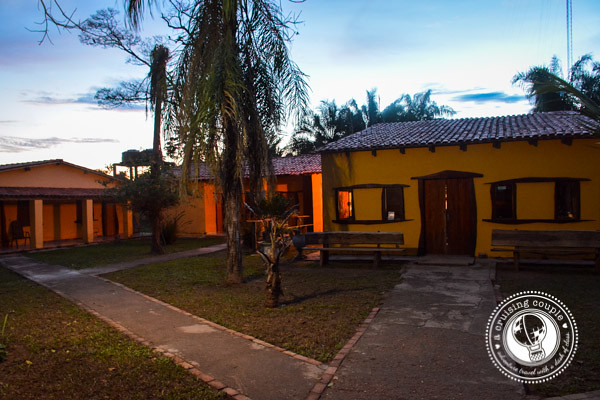 * The jaguar is the largest wildcat in the Americas, and the third largest feline in the world (only after the lion and tiger).

*Jaguars are solitary and typically live and hunt alone.

With the sun still low on the horizon, we boarded our little seven-seater boat and sped off down the river with high hopes. It was a beautiful day with good company, and we were prepared to enjoy a day on the water, whether that day included any jaguars or not. 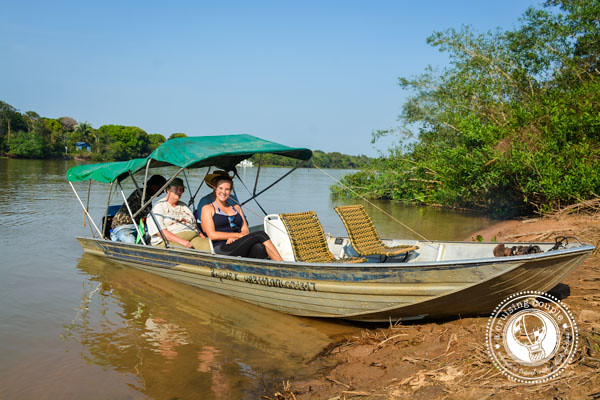 Unfortunately, those high spirits didn’t last for very long. While speeding along the banks of the river, we were suddenly thrown out of our seats and into the backs of the wicker chairs in front of us. Luckily I avoided any injury by hitting the chair with my shoulder. But when I looked over towards Casey, it was immediately apparent she had not fared to well. Casey quickly popped her head up from the floor and eagerly asked: “Is it a jaguar?!” And that was when I saw that she had split her upper lip and was uncontrollably bleeding from her nose. Forget the jaguar, your face is bleeding!

“There’s no jaguar – we hit a sandbar,” our guide declared. Our friends behind us offered their roll of toilet paper for Casey to clean up with, and we quickly realized that luckily the damage was just a few cuts and bruises from Casey face-planting into the chair. Our driver quickly explained that there has never been a sandbar there before and that the river must have changed. Though we believed him, we would be lying if we said the incident didn’t put a damper on our mood.

After removing ourselves from the sandbar and getting Casey’s still-beautiful-but-bleeding-face under control, we set off once more to look for jaguars. We passed the occasional boat of other tourists, but no one seemed to be having any luck on their wildlife sightings. We did however see hundreds of capybara and cayman, rolling in the mud and soaking in the sun. We made a stop for lunch under a shaded tree on the bank of the river and ate, the calories fueling our energy and optimism. But when we got back on the boat, the afternoon brought still more cayman and capybara. 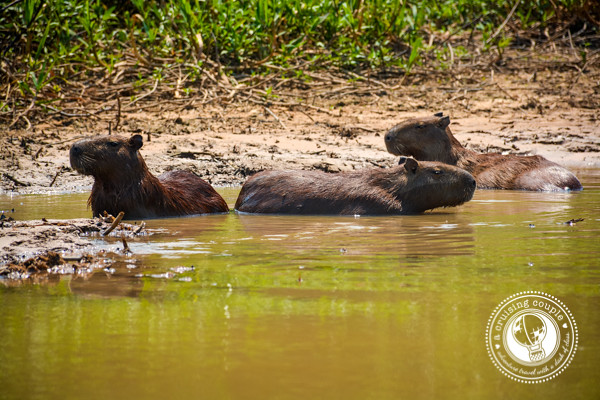 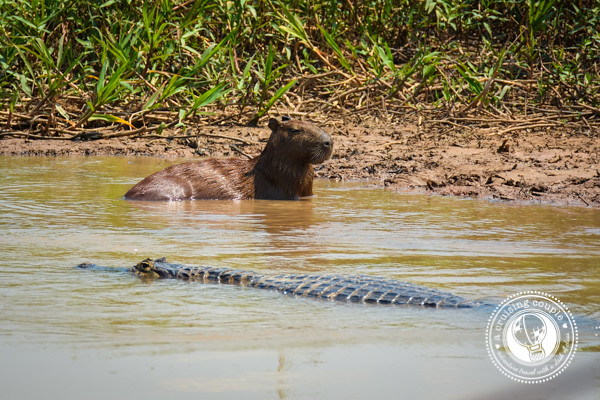 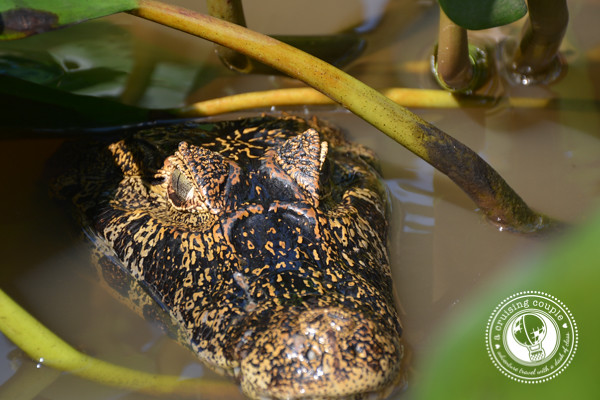 With just about an hour until the sun would set, we knew that it was time to call it a day. But then, just as we were preparing to turn around, we got word from one of the boats that a jaguar had been spotted not far from where we were. With the engine wide open we raced to the spot where this jaguar was claimed to rest. And sure enough, there he was, hiding in the shade… 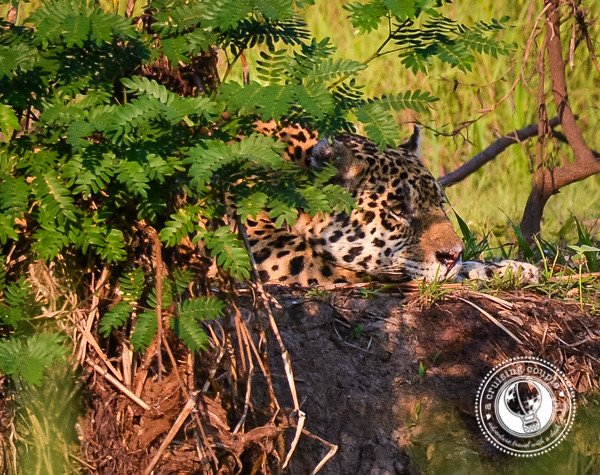 Along with 20 other boats. 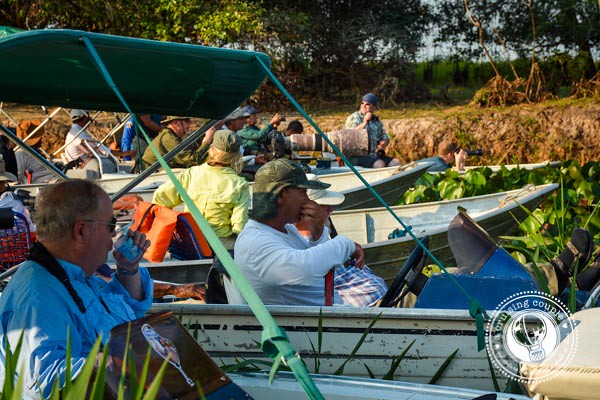 We were grateful for the sighting. Even from far away and half hidden behind a tree, the jaguar was absolutely exquisite. But if we’re being honest, the glimpse of this beautiful animal only wet our appetite for a closer encounter. Unfortunately our close encounter would have to wait. The following day we were granted a thunderstorm, and the rain bucketing from the sky made both driving along the dirt road and attempting to go out on the boat unsafe.

So we semi-patiently waited until our final day in the Pantanal. We set off just as we had before, cruising through the tributaries of the river, scanning the banks, and listening for any noises of large animals moving through the brush. We slowed in one of the tiny waterways when we heard a stick crack behind us on the left bank. We scanned the left bank for a few minutes, but saw nothing. Determined to find something, Casey and I continued looking back as Junior turned to steer the boat. And then, all at once, in a half whisper-half yell cry, he exclaimed: “JAGUAR!”

We turned our heads and this is what we saw: 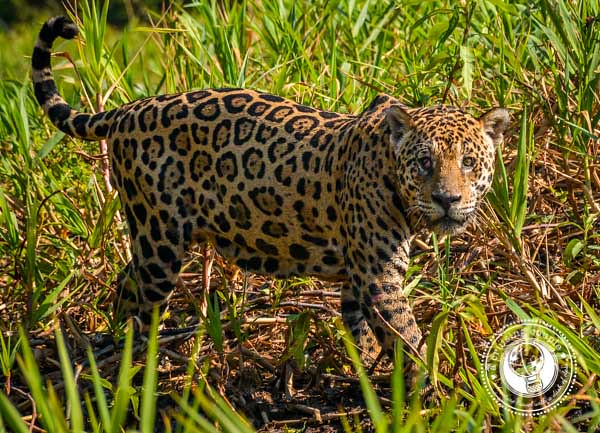 Not more than 10 feet in front of us was a beautiful male jaguar, frozen along the side of the bank, staring at us with what we can only assume was a battle scar in his left eye. This moment will be forever etched into my mind. Our eyes connected as he took a long, hard look at us. And then casually, as if without a care in the world, he continued to walk along the bank and look for breakfast. 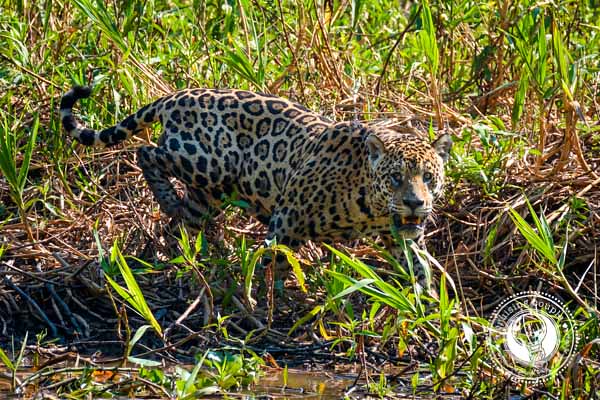 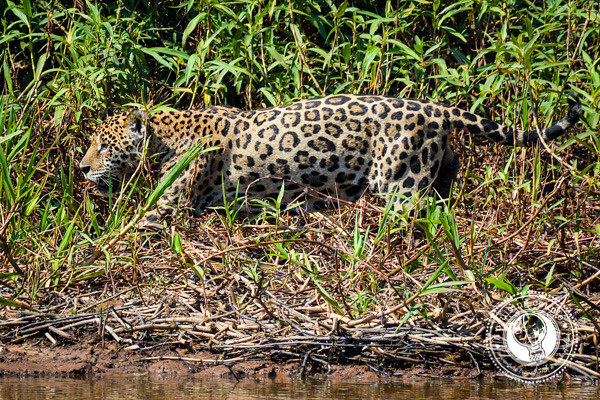 For the next hour we continued to drift alongside the fantastic feline. We gave the jaguar plenty of space and respect, and in return he swam in front of our boat, hunted along the bank of the river, and snacked on a baby cayman. There were no other boats, no other people, no bodies pushing for the best photo, and not even the sound of the boat motor. 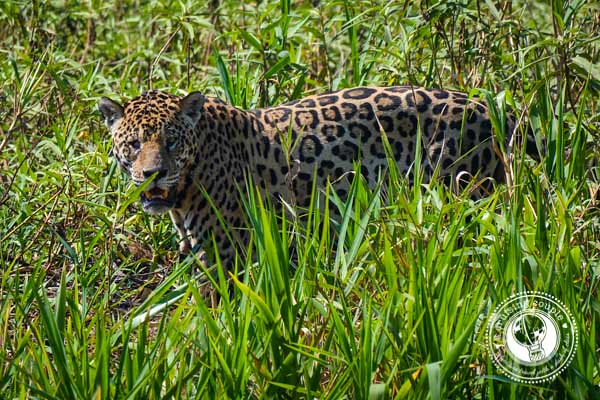 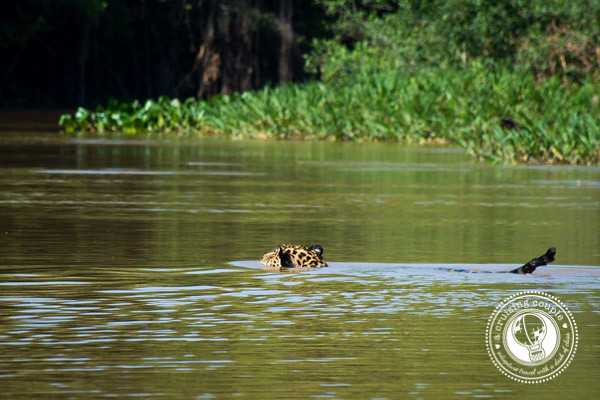 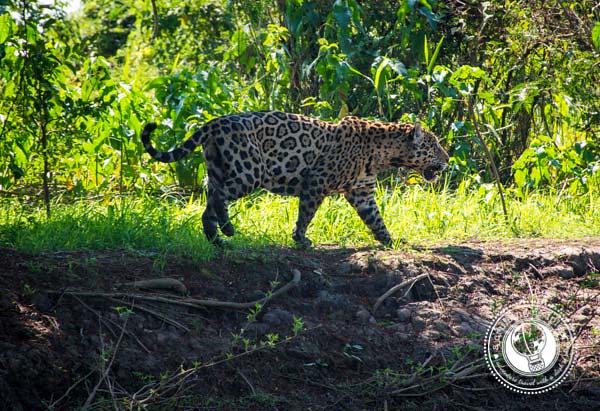 It was just us, a paddle, a jaguar and thousands of hectares of wilderness. And it was absolutely glorious. 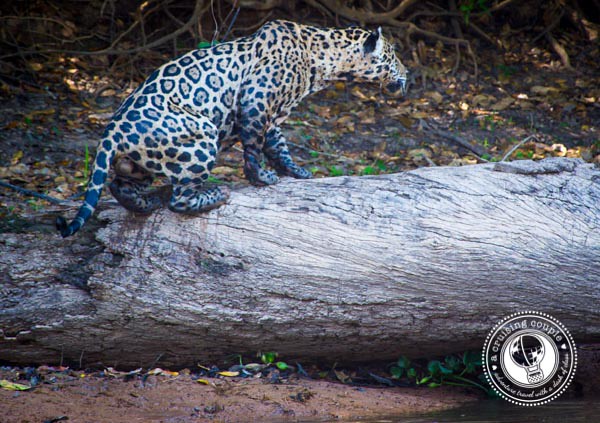 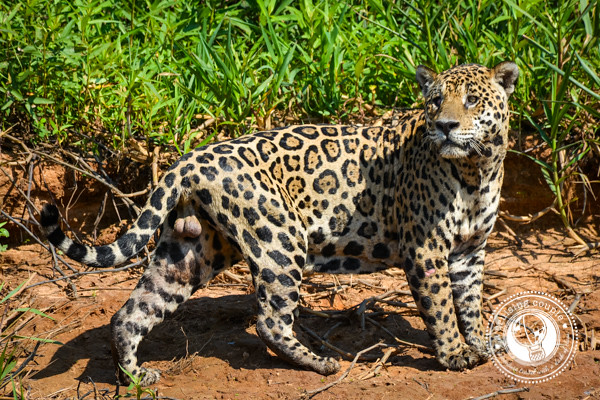 Fast Facts About The Pantanal

* The Pantanal consists of hundreds of thousands of square kilometers of flooded grasslands, savannas and tropical forests—10 times the size of the Florida Everglades.

* The best time to visit the Pantanal is during the dry season, April – October, when the water recedes and jaguars take to the banks of the rivers. Up to 80% of the wetlands are submerged during the rainy season.

* Capybaras are the world’s largest rodent. They are everywhere in the Pantanal, and it’s common to see families cooling off in a mud bath on the banks of the river. 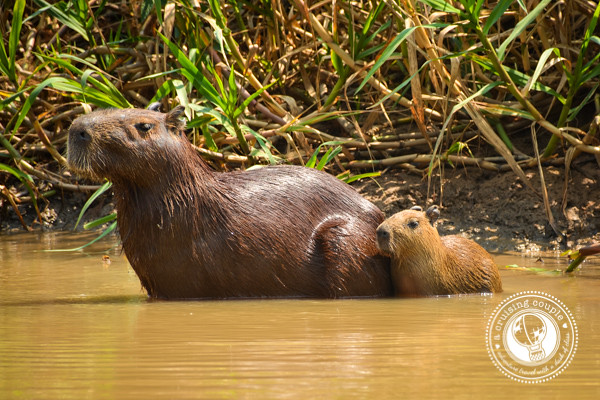 * Millions of cayman call the Pantanal home. You’ll likely see them soaking in the sun along the banks of the river or popping their head out of the water alongside your boat. 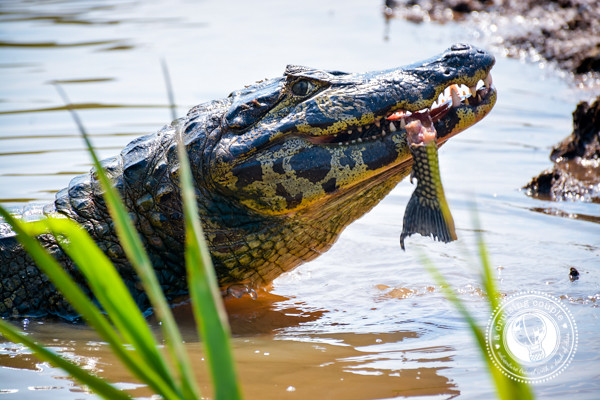 * It’s thought that the Pantanal is home to more than 1,000 different kinds of birds. The rare Hyacinth Macaw (the largest macaw in the world) and the Jabiru Stork (the symbol of the Pantanal) were two of our favorites.

* To optimize your chances of a jaguar sighting, it is best to stay on or near the river. Though not perfect, we did thoroughly enjoy staying at the Jaguar Ecological Reserve. Had it not been for Junior’s skills and the manager’s flexibility in our schedule, we certainly would not have had our second jaguar encounter. Full review of the lodge is coming soon!

Have you experienced the Pantanal? What was your most memorable wildlife encounter? Let us know in the comment section below!

We received a discount at Jaguar Ecological Lodge. As always, all thoughts and opinions are our own.