Getting to know Piccadilly Circus, London

To put it simply, we love London. From the history to the architecture, the red phone booths to the accents, there’s just something truly delightful about hopping across the pond to take on the streets of England’s capital city. And though we could easily be happy navigating any neighborhood, nothing quite says London to us like Piccadily Circus.

I attribute my love to Piccadilly Circus to the fact that it was the very first place I stepped out of the tube and into the London light. But there was plenty to keep the attraction going. Here are some of my top tips for Piccadilly Circus and the surrounding area: 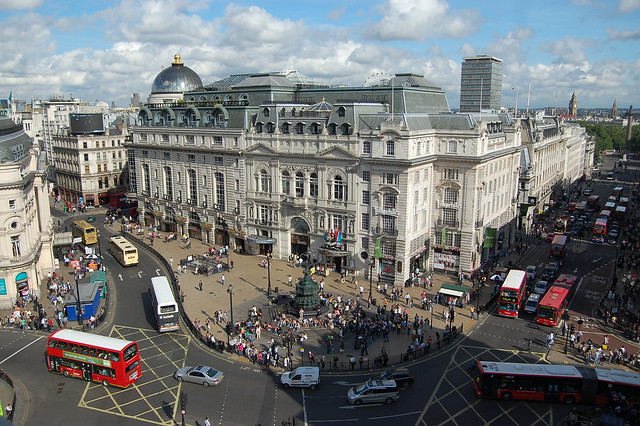 The best time to arrive at Piccadilly Circus is at night, when the billboards and streets are lit up and at their finest. Similar to NYC’s Times Square, Piccadilly Circus boasts plenty of fun shopping experiences, but is perhaps most renowned for the department store Fontnum and Mason, as well as the largest bookstore in Europe. The renowned shopping at Trocadero Shopping Center, Covent Garden and Regent Street is also just a short walk away.

While you’re at Fontnum and Mason, don’t miss the department store’s food court. It’s known for its tantalizing tea times and large array of restaurants. Wagamamas is another local favorite. If you’re craving something a bit diverse, the neighborhood has loads of foreign food, like Chinese, Japanese and Mediterranean.

If you really want to be in the center of all the action, then there is no better place to lay your head than in one of the neighborhoods near Piccadilly Circus. You’ll also be near Oxford Street, the theaters, China Town, the London Zoo, Buckingham Palace, Soho…and that’s just the start! If you’re not sure where to stay, you can’t go wrong with Premier London Piccadily, one of the most luxurious and stylish hotels in town.

This famous statue is a symbol of London and a memorial to the philanthropist Lord Shaftesbury. It was constructed of aluminum in 1893, a rare metal at the time of unveiling. There’s always a crowd teeming around the fountain and statue, but it’s still worth a bit of shoulder shoving to see the iconic sculpture.

You’ll now find plenty of wax museums around the world, but London’s Madame Tussauds was the first. The museum features wax sculptures of celebrities, royal figures, sports stars and even famous murderers. Definitely a wacky must-see in London!