As part of the Momondo Experiences Series, the folks at Momondo challenged us to bring you a unique cultural experience from Paris. Because we love to eat, and we think food is one of the absolute best ways to get to know a new place, Casey challenged her comfort in the kitchen with a French Macaron making class! Having both visited Paris once before, Dan and I decided to use this trip around to do a bit more than the standard tourist attractions. But while a French cooking class was at the top of my list, for some reason Dan was a little less interested in learning to craft the perfect Parisian treat. So we split up to tackle Paris individually for an afternoon, me promising I would return with a delicious souvenir.

I arrived at Cook’n With Class, a lovely little cooking school in Montemarte, on a cool and rainy afternoon. My macaron teacher for the day was Briony, an Australian native who has been living, cooking and teaching in Paris for well over a decade. After an introduction, our small class of four students donned our aprons, grabbed a cup of coffee and then took our places around the kitchen workspace, eager to begin the three-hour lesson.

The origins of macarons are debated. It is commonly thought that the Italians first brought the dessert to France in the early 1500s; however, it wasn’t until the 20th century that the macarons became the famed cookie sandwich we know them as today. A man named Pierre Desfontaines had the idea to fill two macarons with a chocolate ganache, transforming the slightly boring shell into today’s nationally acclaimed and adorable cookie. 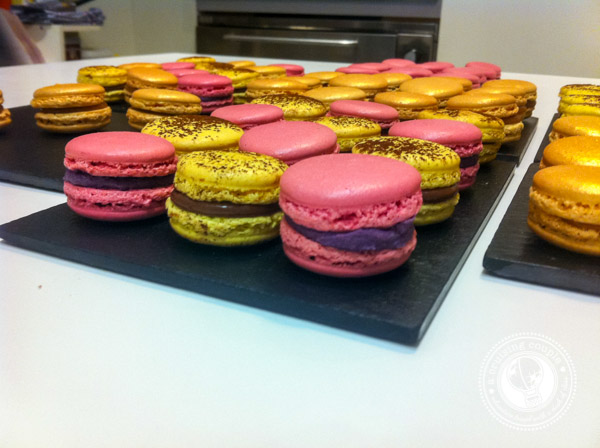 One of my favorite things about macarons is the filling—the unique flavor possibilities are virtually endless. I was a bit anxious to hear what flavors we would be making in class, hoping to avoid the basic ‘vanilla’ and ‘chocolate’ varieties. Luckily my sweet tooth couldn’t have been more pleased with Briony’s selections for the day: Black Current and Violet Ganache; Chocolate Passionfruit Ganache; and Caramel Beurre Salee (salted caramel). YUM! 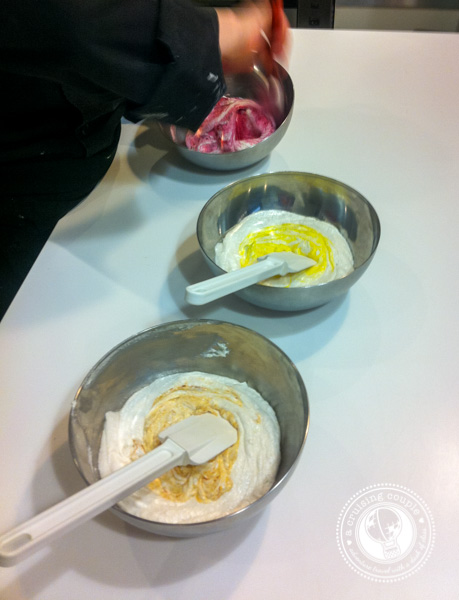 We got to work making our ganaches and caramel first so that they could cool during the baking process. While we were melting and mixing, Briony shared her expert tips on crafting the perfect filling. So far, so good—I could handle most of this. But with creamy chocolate and caramel in the fridge, it was time to start the challenging part—creating the perfect macaron shell. 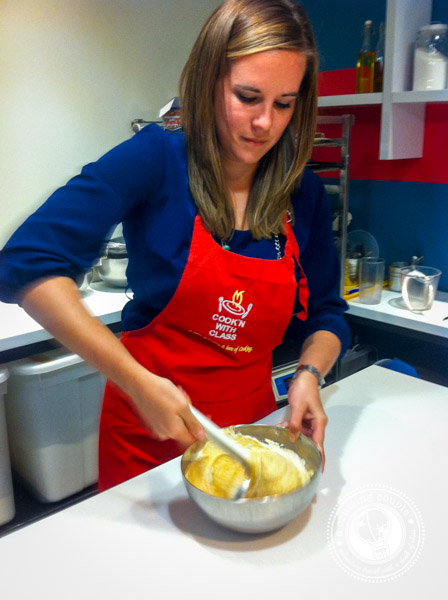 I don’t bake all that often. I don’t even have a kitchen all that often. But I have watched enough Food Network to know a thing or two about a kitchen aid, and I can make a pretty mean brown buttter pumpkin cupcake with salted caramel frosting. No matter. When it came time to make the macaron shells, I knew in about five seconds that I was in way over my head. Luckily my three class participants felt about the same as I did, and Briony was patient with our constant stream of questions. 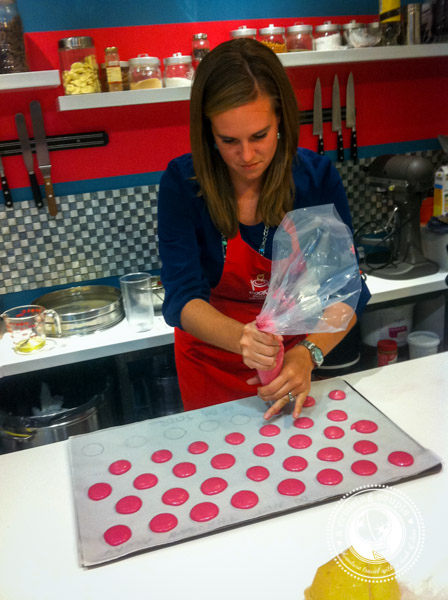 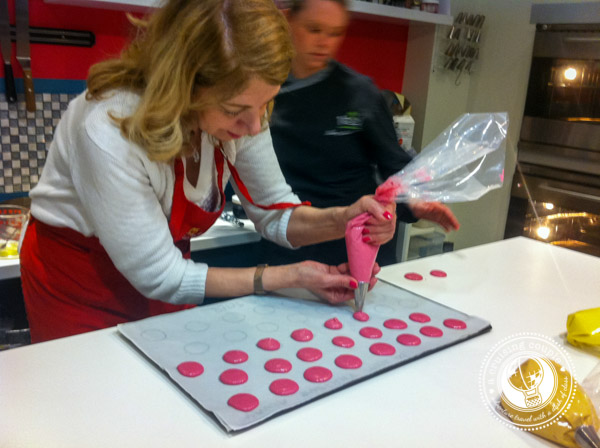 We got out the scale and began weighing our ingredients to ensure we had the exact amounts needed. Almond meal and powdered sugar were sifted; sugar water was heated to an exact temperature; and egg whites were whipped with careful precision. Briony reminded us that baking is a science. For our macarons to turn out perfectly, we had to follow each step with vigor and care. 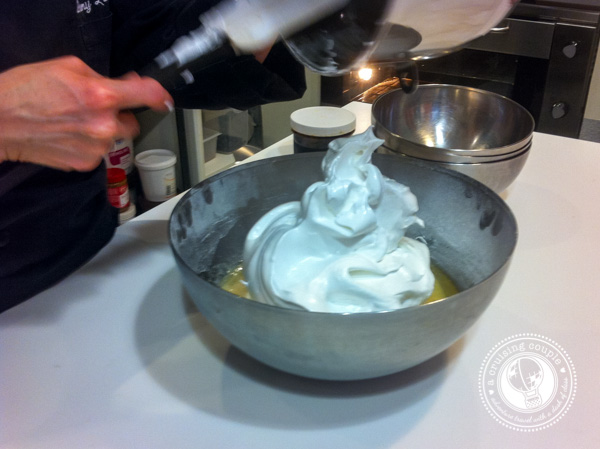 With Briony’s skill and guidance, our meringue was soon ready to be piped onto a wax paper template. Making the shells again proved more difficult than expected, and even with a template, all of our circles were slightly different shapes and sizes. 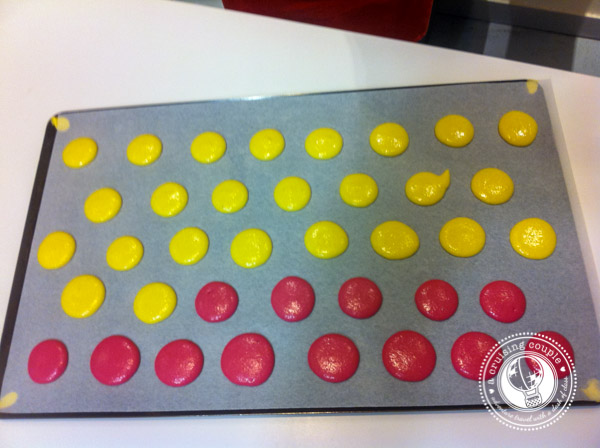 The shells were then popped in the oven and our coffee cups refilled. We stood in front of the oven, waiting and watching for the cookie to turn just right. The perfect macaron will be slightly crispy on the outside, slightly chewy on the inside, and with a ‘foot’ on the bottom. While baking, it’s important to keep the oven door cracked open to keep the shells from cracking. Seriously, macarons are as high-maintenance as they come. 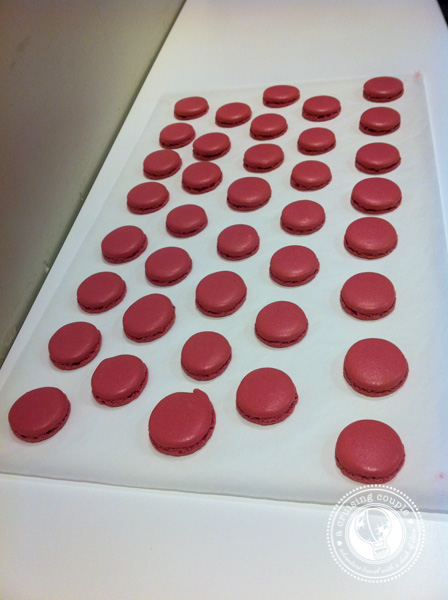 Around 15 minutes later our cookies were ready for their filling. As we matched shells of similar sizes, I resisted all urges to swipe a cookie for a sneaky sample. With a bit of a gold-dusting here and a bit of piping there, our small kitchen crew soon had six dozen macarons to be proud of. 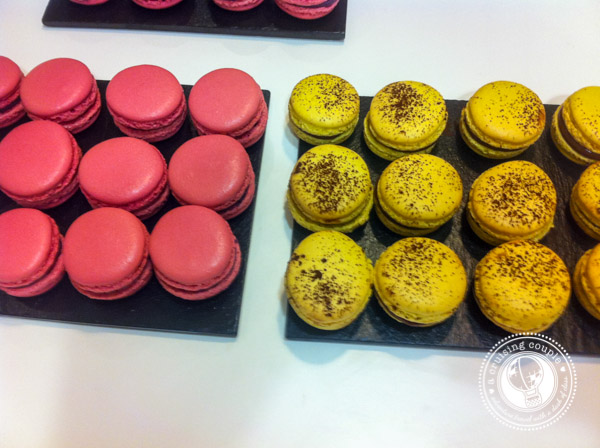 While our macarons might not compete with the famous Parisian macaron houses, I thought they turned out pretty darn good—no cracking, all of them spherical-ish, and with a lovely array of colors. But of course the most important part: could they pass the taste-test? Briony informed us that macarons always taste better the second day, but I had already waited three hours and there was no way I was going to go any longer than that! I sampled one of each color, and swooned over the results. They were fantastic! The Black Current and Violet turned out to be my favorite, with the Salted Caramel coming in at a close second.

I left Cook’n With Class with a box of 18 macarons, and though I easily could have eaten them all by myself en-route to meet Dan, I did decide to share a few with my wonderful husband and a few Parisian friends. To my delight, the Parisians were shocked to learn that I had something to do with making the macarons. I’ll take it as a testament to how great the sweets were (and not how out-of-place I seem in the kitchen!) 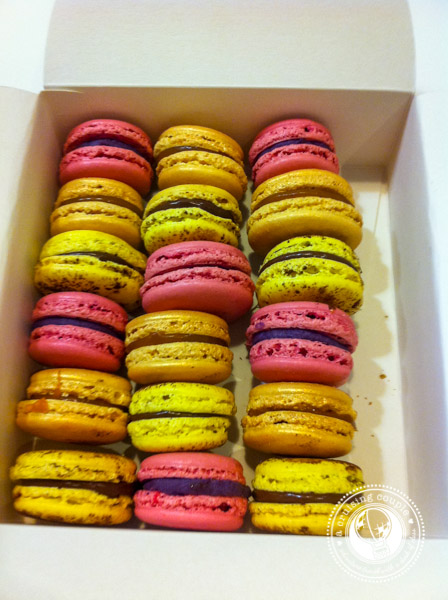 I am a bit skeptical about what results I’ll have when I attempt to make macarons on my own. Normally when I cook it’s with a glass of wine in hand, a loose recipe nearby, and a lot of ‘a little of this’ and ‘why not a little of that’. Or basically I do the complete opposite of perfectly formulated cookie science. But if nothing else, my afternoon of making macarons taught me just how much adoration these sweet little bites deserve. I don’t think I’ll ever complain about paying 2€ for a macaron again!

Though you can purchase macarons just about anywhere in Paris, the following are two of the most renowned macaron shops:

Laduree is famed for selling the original macaron, and is named after the grandfather of French macaron inventor Desfontaines.

To take your own macaron making class, get in touch with Cook’n With Class. They offer a variety of cooking classes if (for some crazy reason) macarons just aren’t your thing.

Do you love macarons? Have you ever taken a cooking class?