Rising 600 meters above the Lyesfjord, the views from the top of Pulpit Rock—also known as Preikestolen—are said to be some of the best in all of Norway. After seeing countless pictures of Pulpit Rock ‘repinned’ on Pinterest, we knew this was one adventure in Norway we had to experience for ourselves. 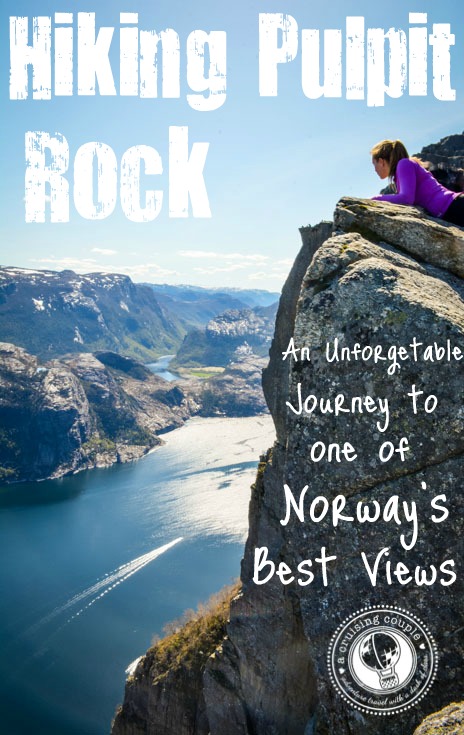 We arrived at the Pulpit Rock car park early in the morning, hoping to beat the crowds of fellow tourists also off to discover the iconic Norwegian landmark. Unfortunately we would have no such luck. Pulpit Rock is an extremely popular day hike—especially when that day falls on a warm and sunny holiday weekend. As we mentioned in our post about traveling Norway on a budget, attempting to see the sights over Easter was not the best planning on our part. 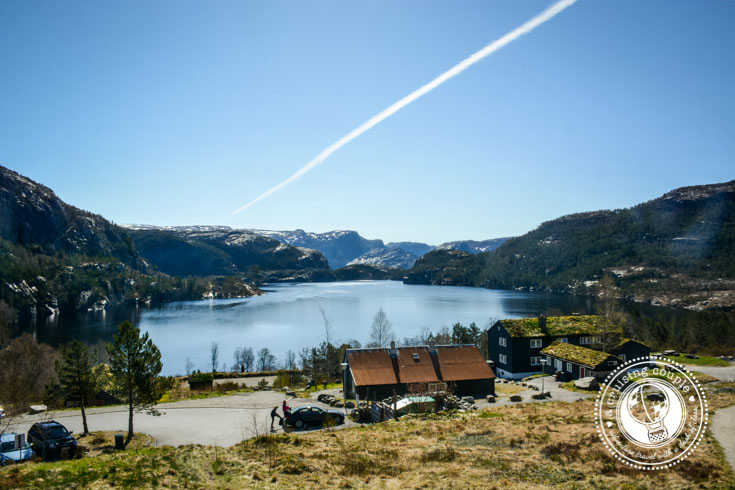 So sharing the hiking path with masses of other people was certainly not ideal. We constantly had to stop to wait for those ahead of us to finish chitchatting in the middle of the trail. And then there were the adolescents that kept bumping into us from behind as they tried to race to the top. Though the hike was beautiful, it was at first difficult for us to appreciate the surrounding landscape with so many other people in it!

(Dan’s good at capturing images at the right time. It was actually much more crowded than it looks!) 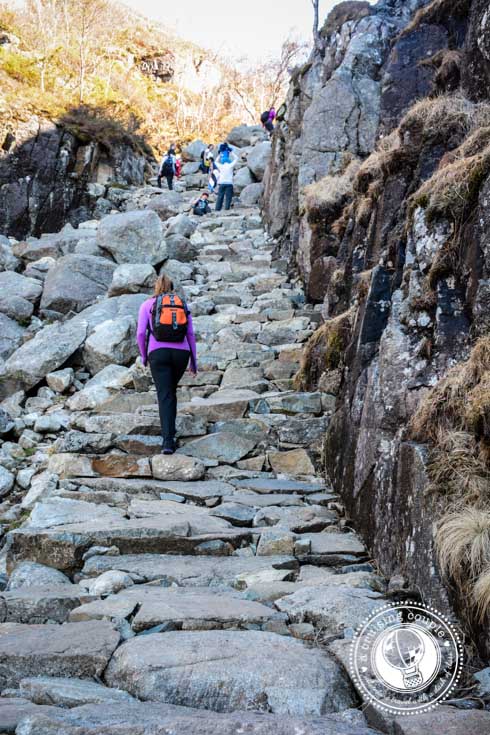 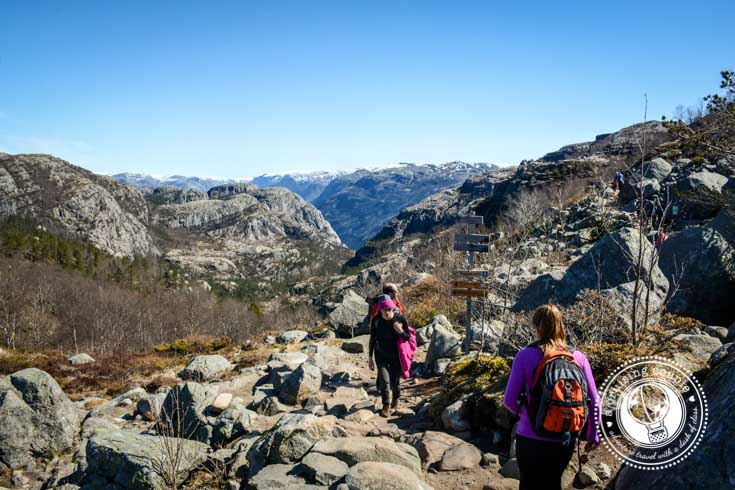 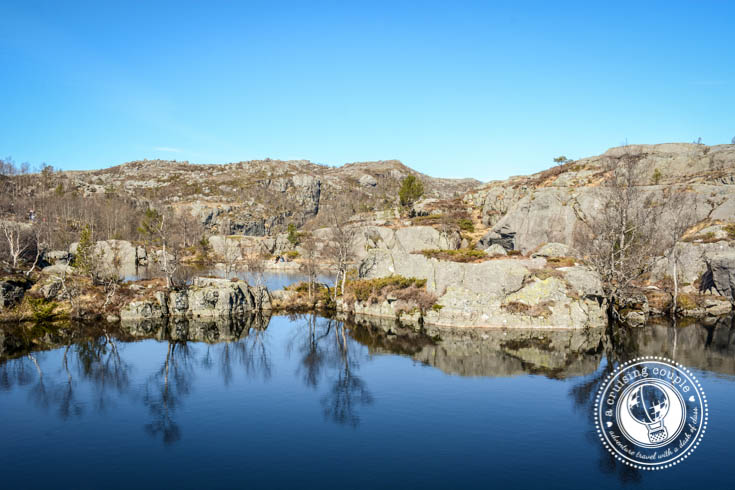 Had we been prepared for the crowds, perhaps they wouldn’t have bothered us so much. Regardless, we did eventually get into the groove of hiking in a group, refusing to let something as silly as people deter us from enjoying our trek. 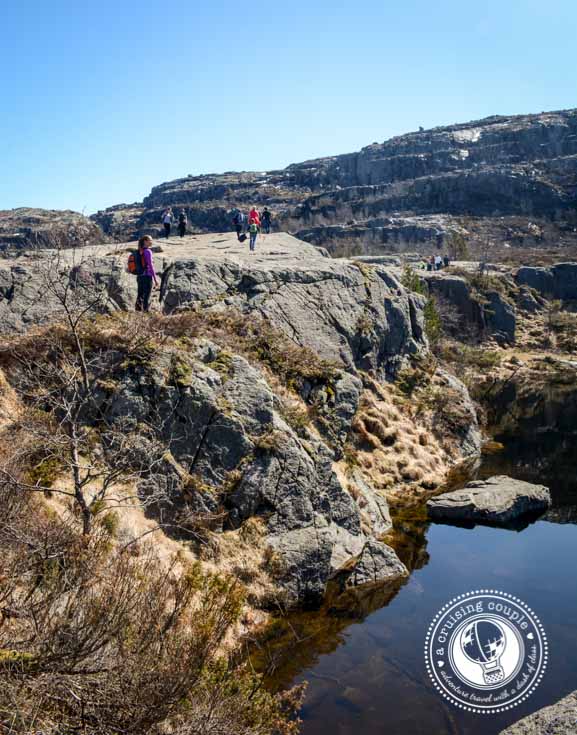 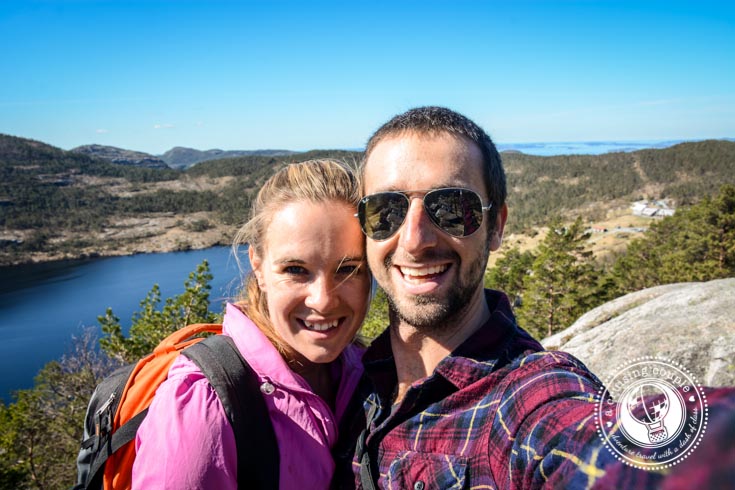 Two hours and a steep climb later, we arrived at the top of Pulpit Rock. Putting up with every single last pushy person was more than worth it in return for the views that awaited us. 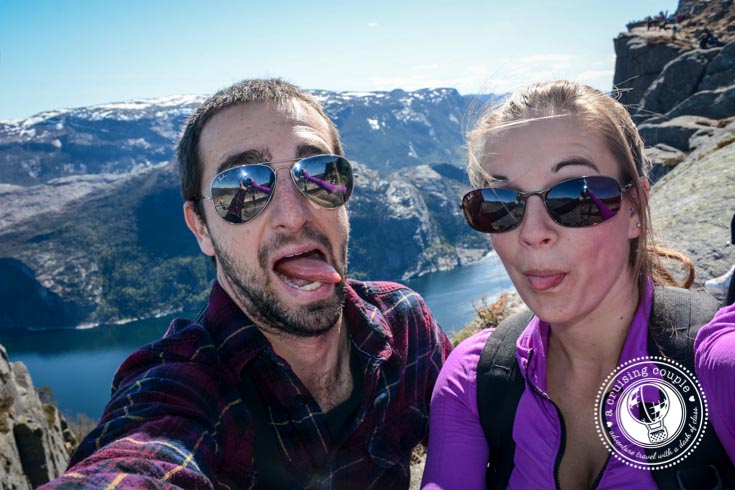 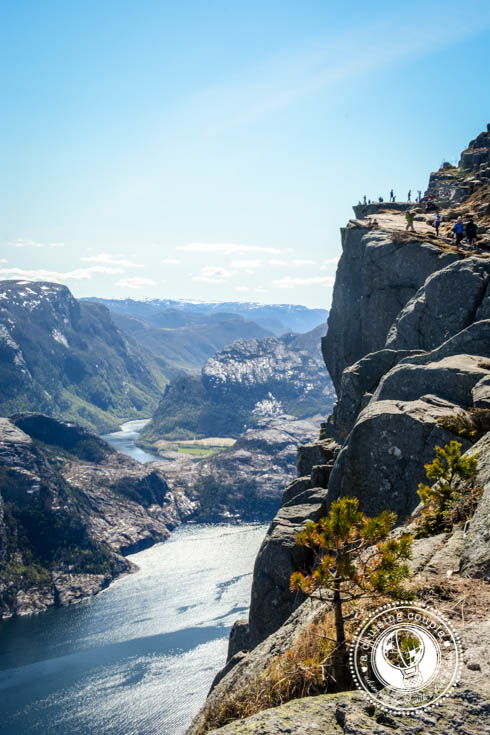 Though we don’t necessarily have a fear of heights, we don’t particularly enjoy dangling our extremities off the edges of cliffs, either. But at Pulpit Rock, that’s exactly what everyone does—and it certainly makes for some stunning photos. It took us a while to warm up to the edge of the rock. First we ate a sandwich a few feet back. Then we inched a little bit closer to help some girls take photos of their heads dangling out over the deep void. And then before we knew it, we were peeking over the edge ourselves, combating the feeling of vertigo that threatened to overwhelm us. 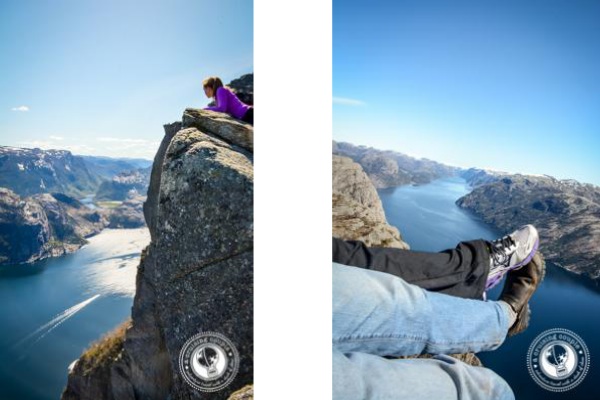 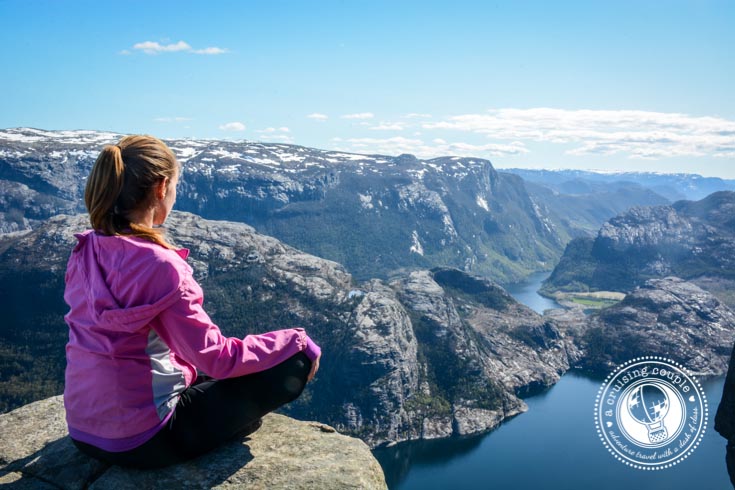 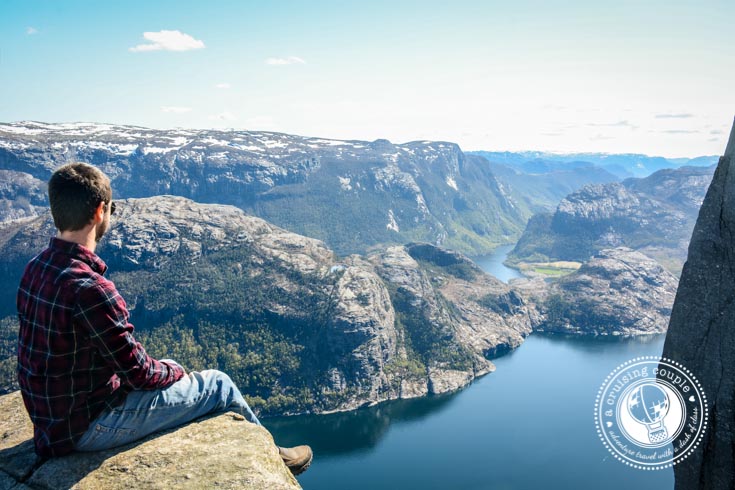 People will do a lot of stupid things for a good photo. We saw a few handstands on the edge, and just watching the antics was enough to fill us up with butterflies. Yet astonishingly (and thankfully) there have been few fatalities from the rock. For a destination that receives hundreds of thousands of visitors each year, that’s pretty good.

When we finally began our return hike, we felt a surge of accomplishment rush through us—not from reaching the summit of the cliff, but rather from pushing ourselves closer and closer to its edge. There are plenty of metaphors about life and adventure that we could aptly tie in here, but instead we’ll just leave you with this quote. I think it sums it all up quite nicely: 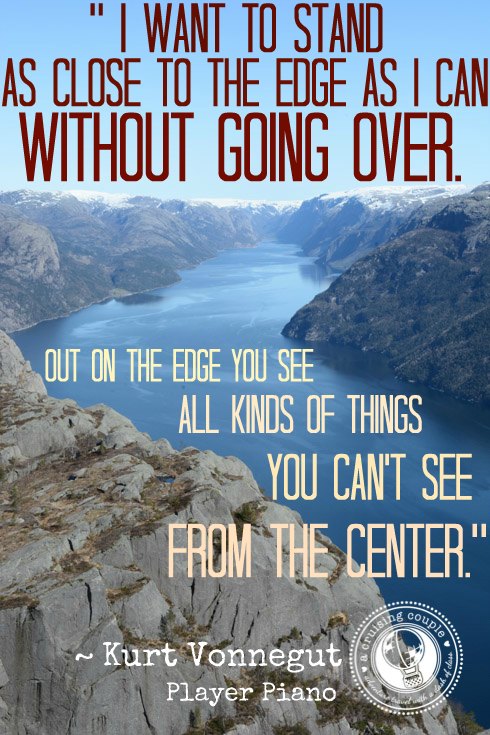 Getting to Pulpit Rock

Pulpit Rock is most easily accessible from the city of Stavanger, about a one-hour drive from the Pulpit Rock car park. We drove ourselves to Pulpit Rock so we could turn the hike into a larger weekend road trip along Norway’s southern fjords. The drive from Bergen to Stavanger and back was extraordinary and one we would highly recommend. If driving, the ferry from Stavanger to Tau costs NOK 133 for the car and driver; NOK 44 for each additional passenger. The ferry departs regularly, around 28 times per day. Parking at Pulpit Rock costs NOK 100, though we saw many people get out of this fare by parking down the road. 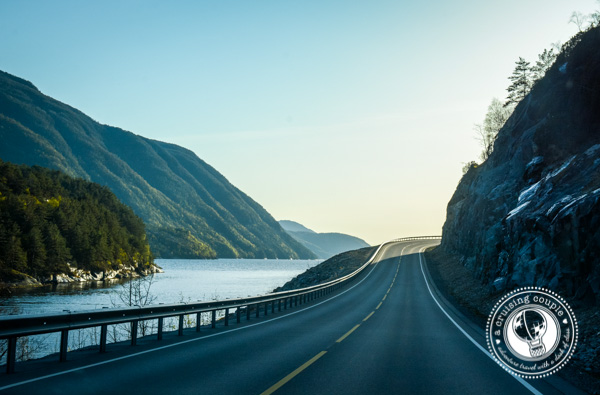 Alternatively, bus travel is possible and popular. You’ll still have to take the ferry from Stavanger to Tau. From Tau, buses continue to the Pulpit Rock car park, but only between May and September, and on weekends in April. During other times of the year, the bus from Tau will take you to the Preikestolen Mountain Lodge, 9 km from the Pulpit Rock trailhead. From here you can walk or take a taxi to the trailhead. Check for updated bus timetables here. It’s also possible to purchase a joint bus and ferry ticket with a company called Tide, which is said to be less expensive than purchasing the tickets separately. (NOK 236 if purchased separately, NOK 200 if purchased jointly.)

*Note: this was the most up-to-date information we could find online and from asking others who have taken public transport to Pulpit Rock. Be sure to check for current prices and timetables.

It is only recommended to hike Pulpit Rock between April and October. At other times the trail can be snowy and icy, making conditions unsafe.

There is no fee to hike Pulpit Rock.

This is a hike, not a walk. Wear good athletic shoes and warm clothing. Also take along plenty of water and a lunch to enjoy from the top!

Would you dangle your feet out from the top of Pulpit Rock? What’s the most vertigo-inducing thing you’ve ever done?