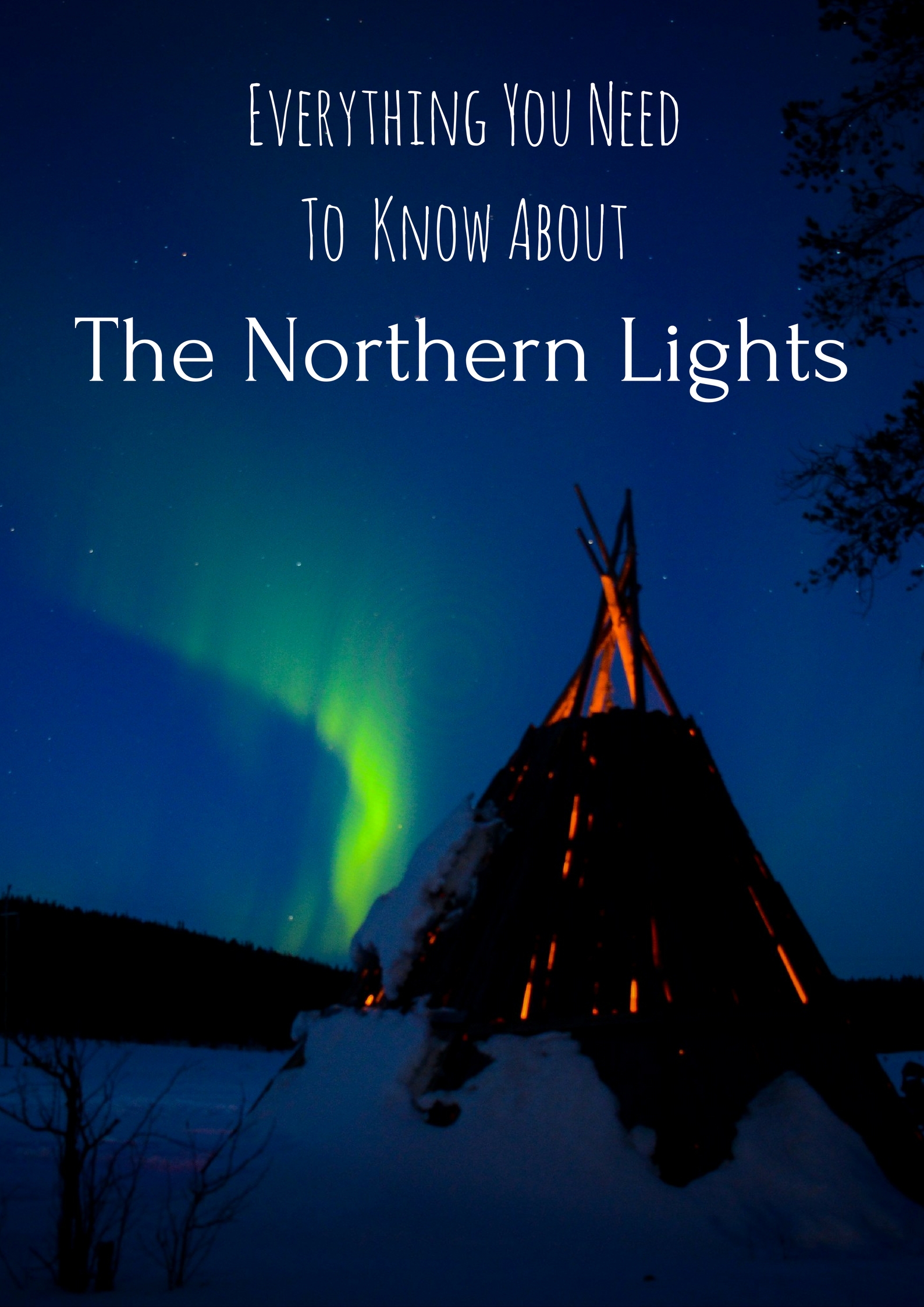 When we first booked our plane tickets to Stockholm, we had no intention of making the journey up north to Lapland. To be completely honest, I don’t think we even knew where Lapland was. But when we learned that the Northern Lights were visible there through the start of April, there was no question about it—we were going to the Arctic.

We soon discovered that there was a lot more to Lapland than just Aurora hunting, and we became captivated by the endless ski, snowmobile, dog sled, and snowshoe opportunities waiting for us. Traveling to this region would be a completely new adventure for us in every sense of the word. We were still secretly hoping that the impetus behind the trip—to see the lights—would be possible, but we also had to remind ourselves to be practical. There was a large chance that we wouldn’t see any Northern Lights during our two-week stay. February had been so cloudy that no one saw any lights for the entire month. There was just no way to know for sure. 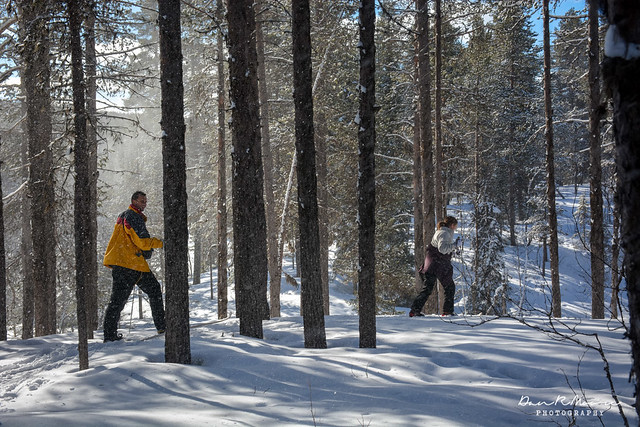 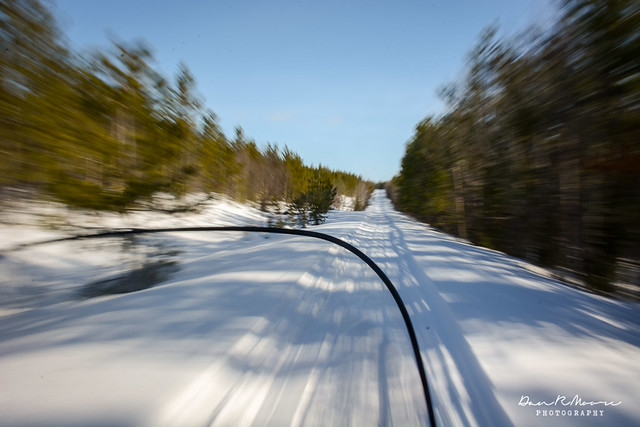 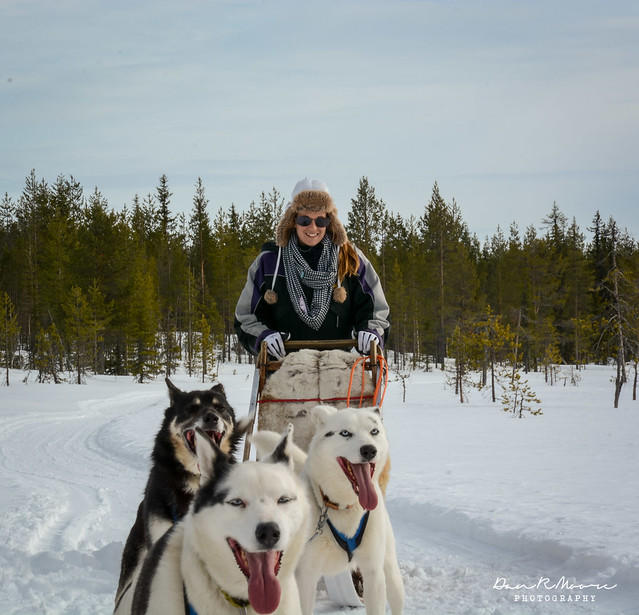 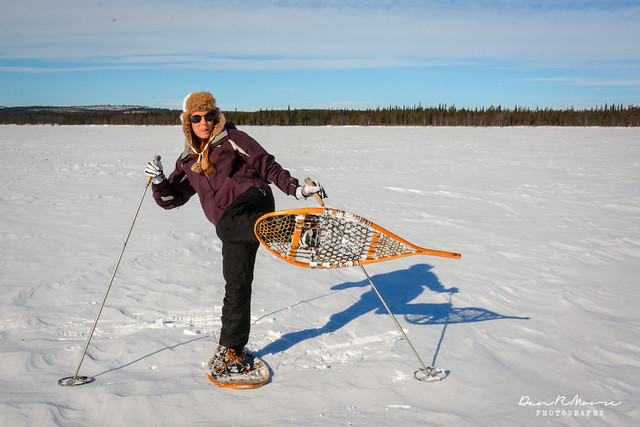 In the end, we were extremely fortunate. Some nights were better than others, the lights colorfully dancing throughout the sky. Other nights we could only distinguish the lights from the clouds when we looked at the playback on the camera. But there was no question about it—we saw the Northern Lights. 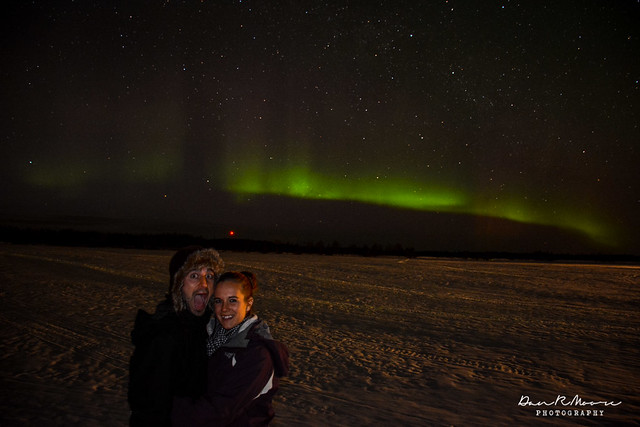 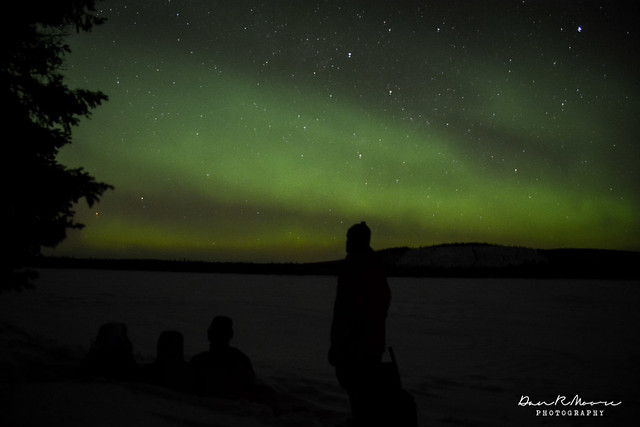 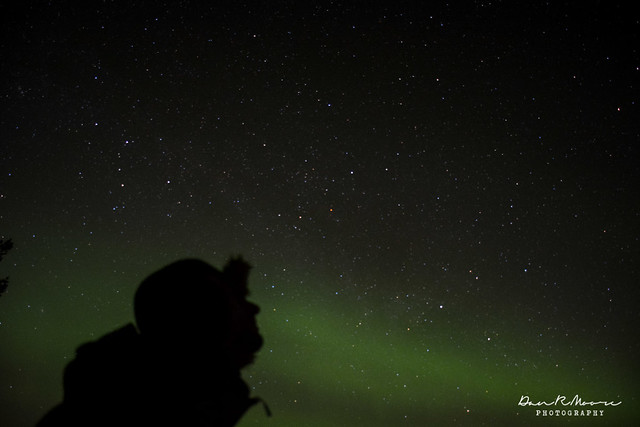 Seeing the Aurora was in many ways a dream come true for us. But throughout the experience we learned a lot about what it’s really like to witness them. And spoiler alert: it’s not like the photos you’ve seen before. Below is a bit of a guide, along with more details about our personal experience.  We hope it will prove helpful if you find yourself venturing out on an Aurora safari of your own!

A Guide On How To See The Northern Lights

Where to see the Northern Lights:

The most popular places for Northern Lights chasing are Sweden, Norway, Finland, Iceland, Canada, and Alaska. The farther north you go, the better your chances (normally). We saw the lights outside Junosuando, Sweden, and Muonio, Finland. 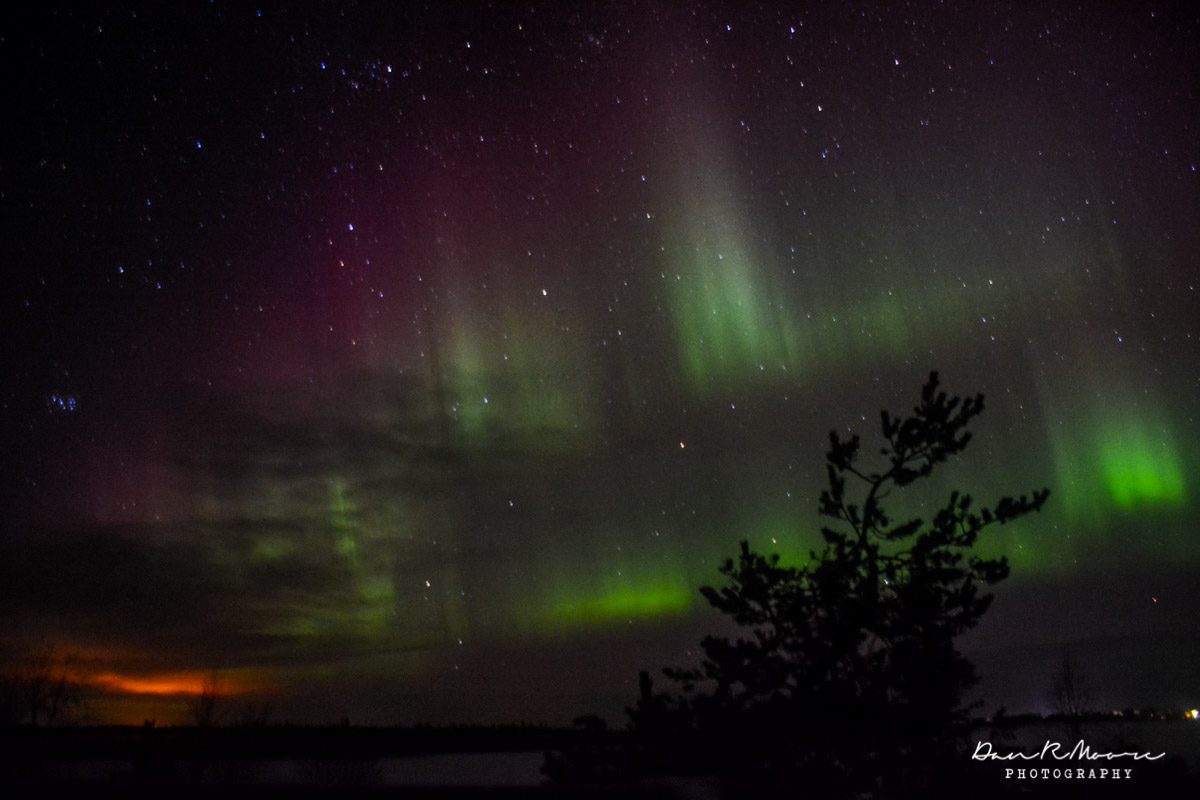 When to see the Northern Lights:

The best time to see the Northern Lights is on a dark, clear night. Most tours run from September to March, though sometimes it’s still possible to see the lights in early April. As the sky begins to get brighter in the spring and summer months, the ability to see the lights decreases.

The lights can appear—and then disappear—at any moment. However, typically there are two waves throughout the night, one a bit earlier around 10:00 and one around or after midnight. If you are able to see the lights once, it is a good sign that you will be able to see them again later in the evening. These aren’t the rules though—you never know what will happen. 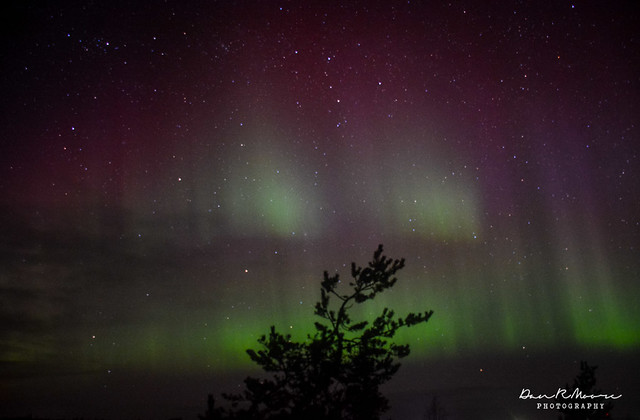 What to bring on a Northern Lights expedition:

A Tripod – Keeping your camera still is crucial for capturing beautiful Northern Lights photos. Find a tall sturdy model that you can stick in the snow.

A DSLR Camera – Hate to break it to you, but your camera phone just won’t cut it this time. You’ll need a camera with a shutter speed of at least 10 seconds; 30” is more ideal.

Warm clothes – We might have resembled the Michelin Man for the past few weeks, but at least we were relatively warm in the process. We’ll be sharing a complete packing guide a little later on, but just know: thermals are your friends.

How to predict the Northern Lights:

As mentioned before, it’s hard to see the lights on cloudy nights. If you can look up to a sky full of glittering stars, then your chances are much better. Additionally, these sites are helpful:

Auroras Now! is a Finnish website that allows you to put in your email address and receive an alert when magnetic conditions make sightings likely.

Should you sign up for a Northern Lights tour or guide?

Of course it’s possible to go aurora hunting on your own; however, we don’t recommend it. The best places to view the lights are often far outside the cities and hotels where there is no light pollution. Local guides will know when and where to take you to increase your chances of a sighting. Everyone we met who took a guide saw the lights. Most of the people we met who tried to ‘DIY’ their sightings did not.

Our first excursion to see the lights was with Aurora Retreat before the start of our wilderness adventure. We piled into a sled, which Mikael pulled via snowmobile up into the forest. This was probably one of our favorite sightings. While the lights weren’t as strong, it was easy to see them moving across the sky. Even towards the end of the night, when we had transitioned to drinking hot chocolate around the fire, the green glow was still visible in the background. 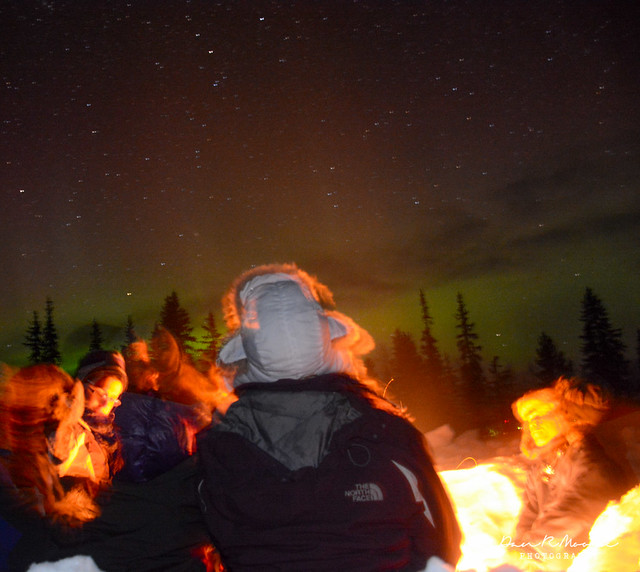 We also took a memorable trip with Harriniva Hotels and Safaris. We were again pulled by snowmobile, but this time piled high with blankets in a private sleigh. After a romantic ride through the forest, we arrived at a secluded, traditional ‘teepee’. The moment we arrived, the lights began. It was as if our guide had pulled a switch. We soaked in what would likely be our last sighting of the Northern Lights for a while as our guide prepared a fire for coffee and tea in the hut. 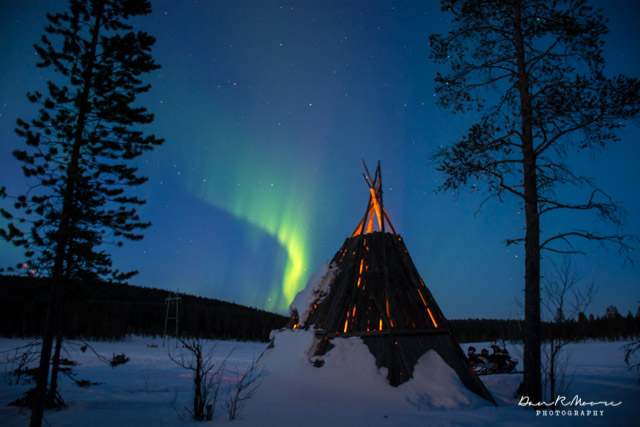 During our wilderness adventure, we had only sit back and wait for the lights to come to us—which they did. One night the lights were so strong that Leif woke us up at midnight to a stunning green haze illuminating the entire sky, even forming the iconic ‘flower’ above us. 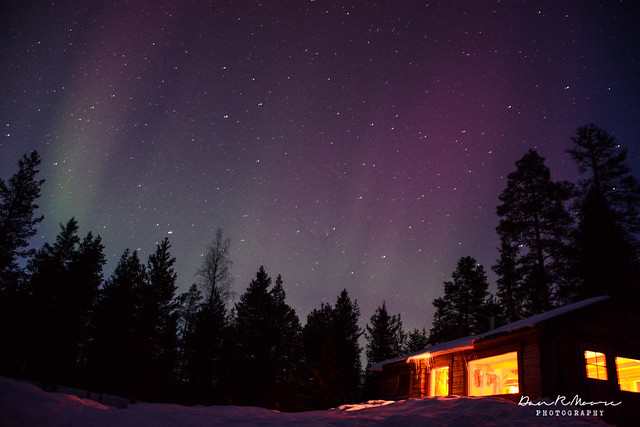 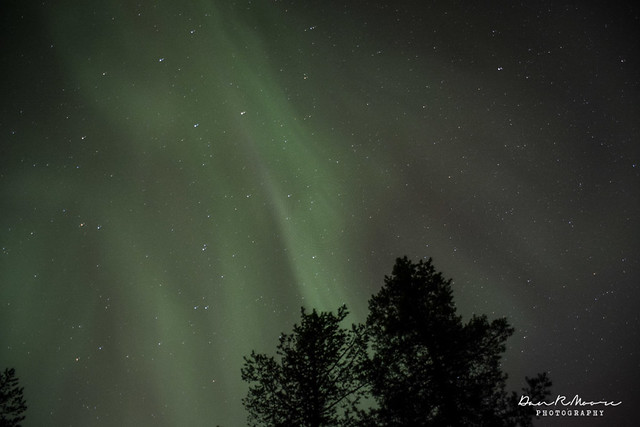 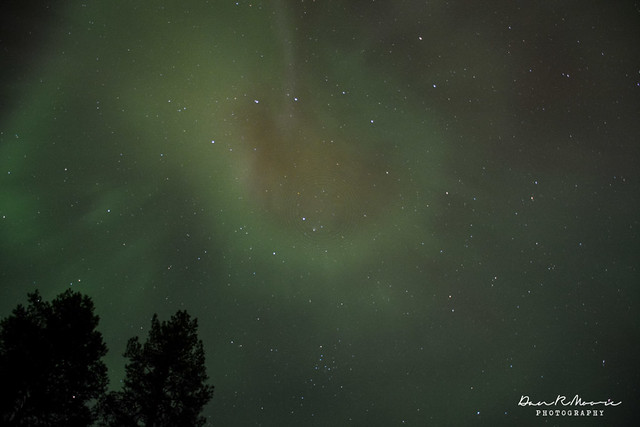 Seeing The Northern Lights: The Naked Eye vs. The Camera

This is one of the most important things to know before you go: the Northern Lights are gorgeous, but they are not going to look like the photos you’ve seen before. The human eye cannot pick up the same amount of light as the camera. So while the pictures might show a vivid array of colors filling the sky, you might only see a light greenish/white mist. The colors are there; it’s simply that your eyes cannot absorb them all. Also, the light show can vary. Sometimes they might stream from the horizon. Other times you’ll see them moving across the sky. Sometimes it’s like a fog extending from all angles. You never know what you’re going to get. 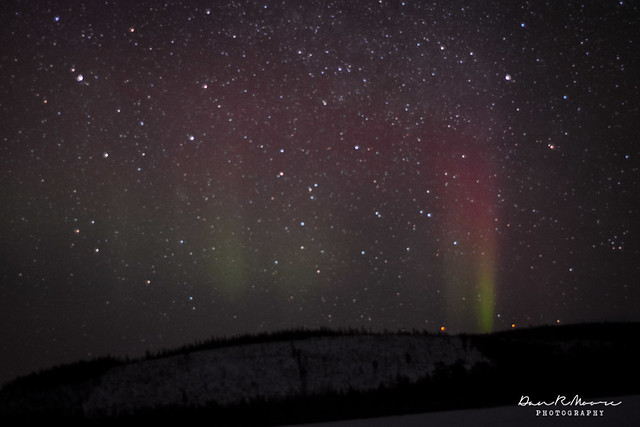 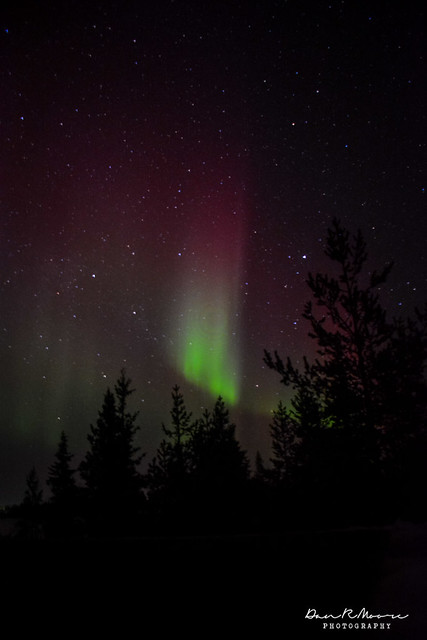 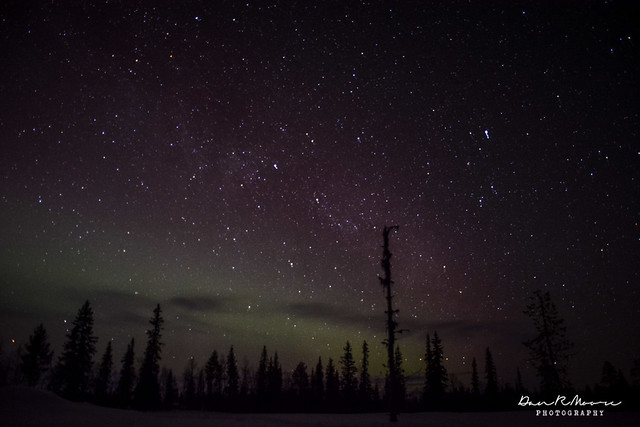 It’s going to be really difficult—if not impossible—to capture the Northern Lights with a point and shoot. To get the best photos, you’re going to need to shoot in manual mode.

Shutter speed controls how long your camera takes the picture. This number should be between 10-30 seconds depending on how strong the Northern Lights and any other lights (buildings, the moon, a campfire) are around you. Experiment with your shutter speed to find your perfect exposure.

Aperture controls how big the eye of your camera is. In order to let in the maximum amount of light, set your aperture to as small of an f-stop as your lens will allow. Anywhere from 3.5 to 1.8 will work nicely.

ISO controls your cameras sensitivity to light. For any nighttime photography, but especially for the Northern Lights, you’ll need to push your ISO up to either 3200 or even 6400.

The best cameras can still have a tough time focusing in low light. Even if you nail all your other settings, your camera can refuse to take a picture if it can’t find anything to focus on. To avoid this, set your focus to manual and move it to infinity or as far in the distance as it will go. Alternatively, you can focus on the horizon before sunset then flip your camera to manual focus. This will also set your focus at infinity.

I already noted that you’ll need a sturdy tripod to avoid shaking, but there’s one other pesky problem that may cause your image to blur ever so slightly: your finger. When you push down the shutter, your camera may move. It happened to me, and it was extremely annoying. You can set a timer for 2 seconds so the camera is guaranteed to be still or use a remote to snap the photo.

Flash vs. No Flash: If your camera is in Auto mode and it senses the scene is too dark, it will try to use the flash to brighten things up. Unfortunately your camera isn’t going to illuminate the night sky and you’ll just end up looking like an idiot who blinded your friends for a black picture. That said, there are ways to use your flash in combination with manual mode to make some cool photos. Specifically, you can’t leave without a photo of you in front of the Northern Lights to prove you were there. Using the settings above you can fire the flash to illuminate yourself in the foreground and the 20-second shutter speed will pick up the Northern Lights behind you. Just make sure you stand still for the whole 20 seconds or you will become blurred. (Also keep in mind that you will want to adjust your focal length so you and your friends are in focus.) 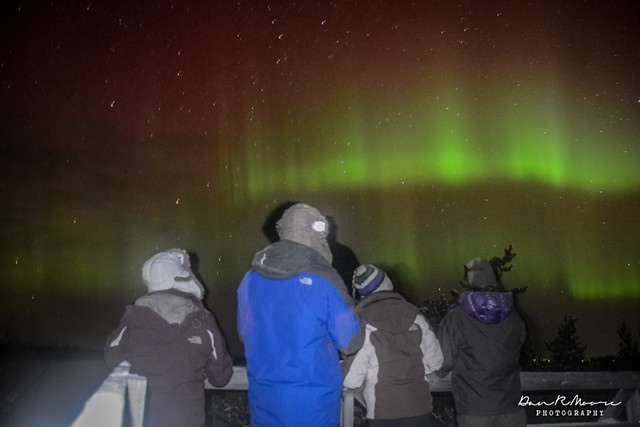 So is it worth it to try to spot The Northern Lights?

Most definitely!! The Northern Lights are absolutely amazing, and in our opinion they do live up to the hype that surround them. Having the chance to see them in person is certainly a once-in-a-lifetime, bucket list worthy opportunity. Just be prepared that you never really know what you’re going to get, and be ready to enjoy the experience regardless!

If you’re not sure how to start planning your own Northern Light safari, we highly recommend the two family-run businesses we went through. You can’t go wrong with Aurora Retreat; their Wilderness Retreats promise a high chance of sightings from the comfort of your cabin. If in Western Finland, Harriniva Hotels and Safaris is the obvious choice. They boast a variety of custom packages, as well as an Aurora Alarm to inform you if a sighting is likely.

So tell us! Is seeing the Northern Lights on your bucket list?

This post wouldn’t be possible without Aurora Retreat and the Visit Finland Tourism Board. As always, all thoughts and opinions are our own.