How To See Lava on Hawaii’s Big Island: Kilauea Volcano

If you’re traveling to the Big Island of Hawaii, then you won’t want to miss the mesmerizing opportunity to see lava as it flows across a lava field and pours into the ocean. We weren’t really sure what to expect before our most recent trip, but seeing lava on the Big Island turned out to be one of our favorite things we did! 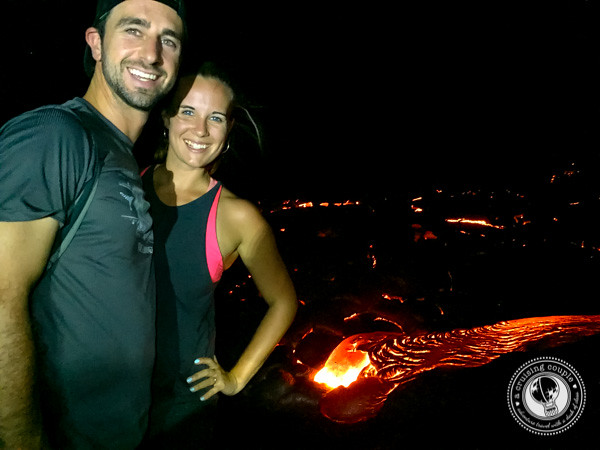 Kilauea, one of the most active volcanoes on Earth, has been continuously erupting since 1983. Most often, the lava flow is slow and gentle; if you follow proper precautions and regulations, it’s safe and fascinating to get up-close to the show!

That said, there are definitely a few tips and tricks to follow to ensure you make the most of seeing lava on the Big Island. Here’s what we learned from our latest lava adventure in Hawaii:

How To See Lava on the Big Island: Kilauea Volcano

There are numerous tours that will take you to see Kilauea’s lava flow, but it’s also easy to go the DIY-route. To start the adventure, head to the popular Kalapana Viewing Site, about 45-minutes from Hilo.

Here, you’ll have the option to hike 9-miles roundtrip down a hot gravel road or rent a somewhat uncomfortable bike from one of the many vendors in the parking lot.

We opted to bike, which we highly recommend. You’ll find heaps of bike rental stations around the parking area, and it makes the trek to and from the lava viewing area much more manageable. 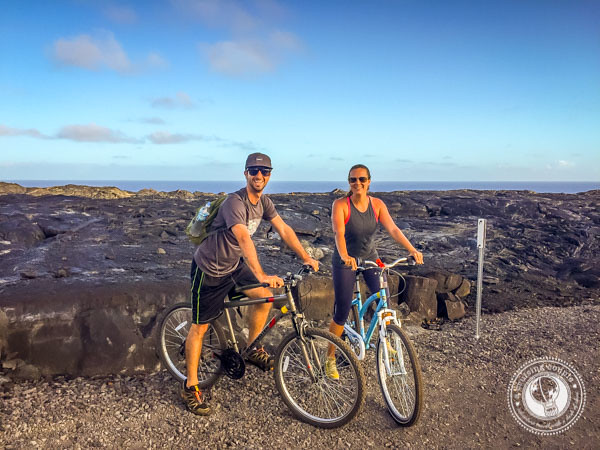 Insider Tip: Expect to pay $15 for a bike, a headlamp, a lock and a water bottle. The bike’s aren’t high-end by any means, but they beat walking in the heat!

You’ll want to time your visit to the lava flow around sunset (or sunrise.) The coastline is beautiful during the day, but the lava is much easier to see as dusk settles in. We arrived at the end of the gravel road with quite a bit of time before sunset, which meant we had plenty of time to grab a great seat on the rocks and take about a million pictures of the lava pouring into the ocean. 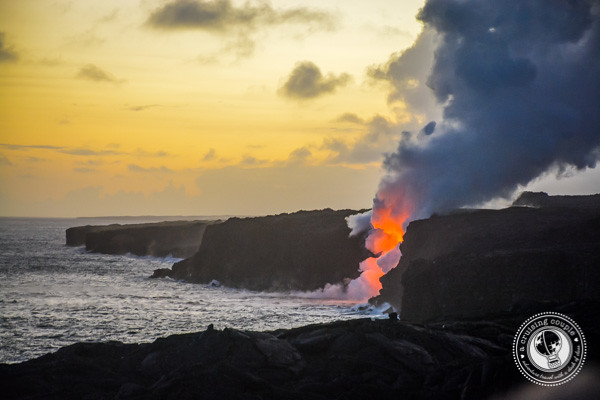 Those steam plumes are a result of the extremely hot lava hitting the much cooler water. 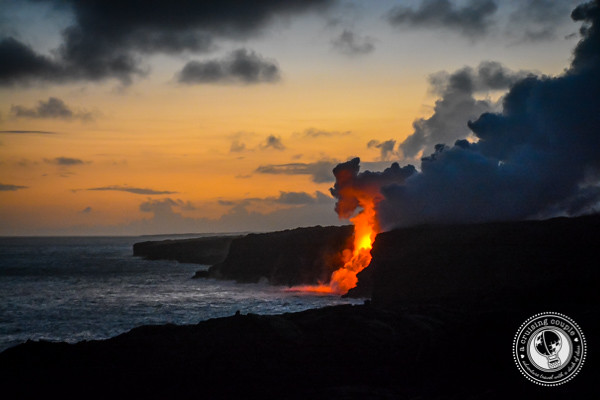 A few people left before it was fully dark, which is a huge mistake! As you can easily see in the photos, the lava show is much more dramatic once the sun goes down. 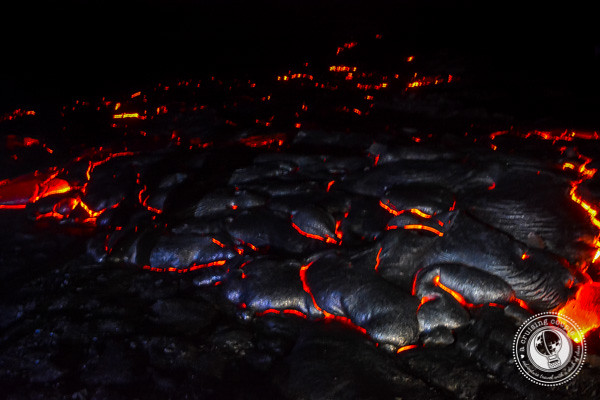 Once you’ve finished watching the lava on the coastline, it’s time to go explore the adjacent lava fields. Located on the opposite side of the gravel road you biked down, it’s impossible to miss the numerous red spots lighting up the night sky.

Follow the crowds and walk for about 20-minutes or so until you stumble upon a spot where lava is slowly oozing. You’ll feel the heat from the molten magma before you see the lava in the cracks beneath you! 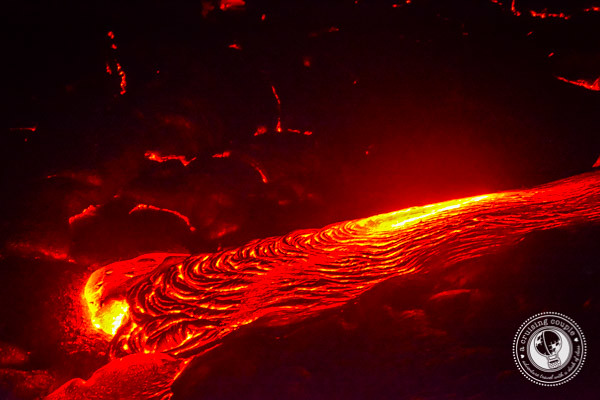 In Hawaiian culture, Pele is the goddess of fire, lighting, and volcanoes. The creator of the Hawaiian islands, natives believe she lives in the Kilauea crater and governs the lava. To respect this, don’t poke the lava or throw anything into it.

Extra Tips For Seeing The Lava At Kalapana

This budget hotel has everything you need, including lovely gardens, a pool and an onsite restaurant. The owner, John, and staff are extremely hospitable, making this one of the best accommodation options for those looking for something clean, convenient and comfortable. 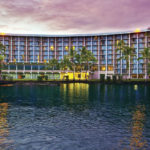 If you’re looking for something a bit fancier, then Castle Hilo Hawaiian Hotel is probably your best choice. It’s an older hotel, so don’t expect a modern five-star hotel. However, the views are phenomenal and the property offers everything you would expect from a larger hotel.

We recommend spending two nights in Hilo (before and after your Volcano adventure), and then relocating to another area on the island that’s closer to the best beaches and hiking.

Have you been to the Big Island? Did you see the lava, and if so, what did you think? 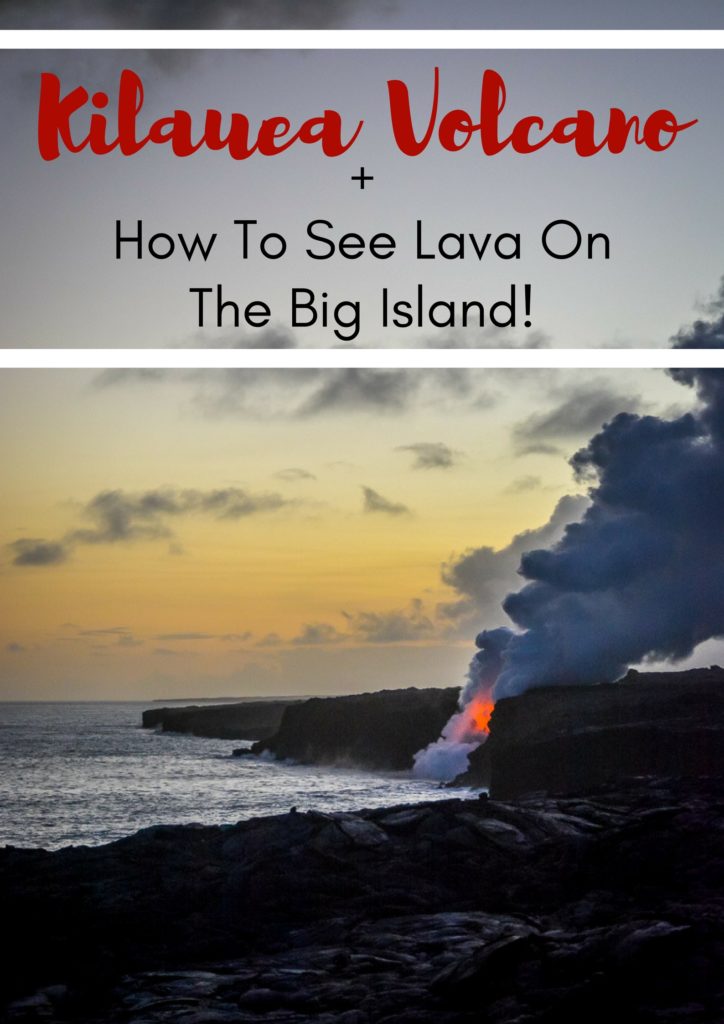