Feel weary of stereotyped sandy beaches, and earthly pleasures of city tour in Asia? It’s time to set your adventurous mind free with a real hook. Tibet, perched on soaring Qinghai-Tibet Plateau in western China, has the very reasons to be your ultimate destination for exploration. 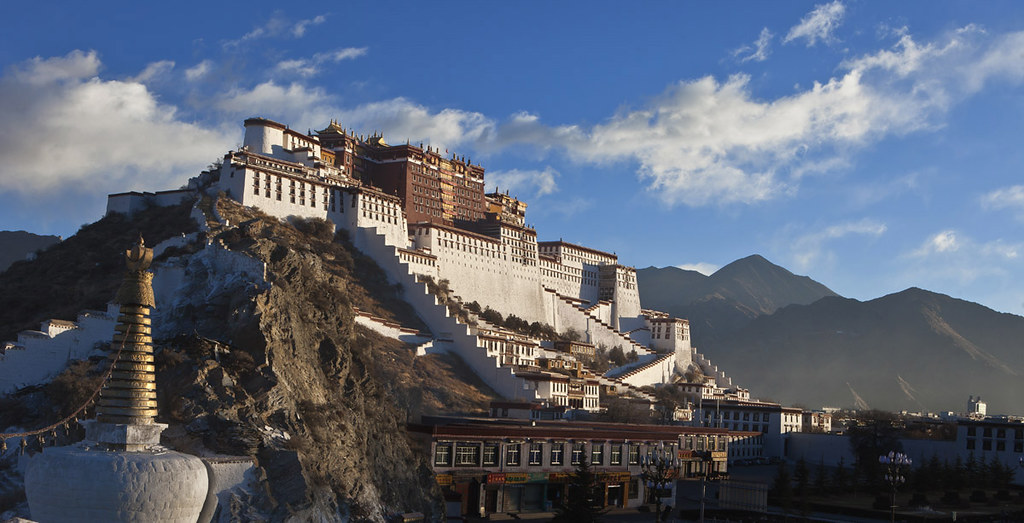 Potala Palace, the most iconic architecture of Tibet

Undoubtedly, one of biggest features of Tibet tour that truly set Tibet apart from other tour destinations is its palpable sense of holiness of Tibetan Buddhism across Tibet. You’ve probably been to Buddhist countries like Thailand and Cambodia, or India and Nepal where Hinduism dominates the countries; still nothing prepares for you not to be blown away by the pervasive influence of Tibetan Buddhism and its profound culture. 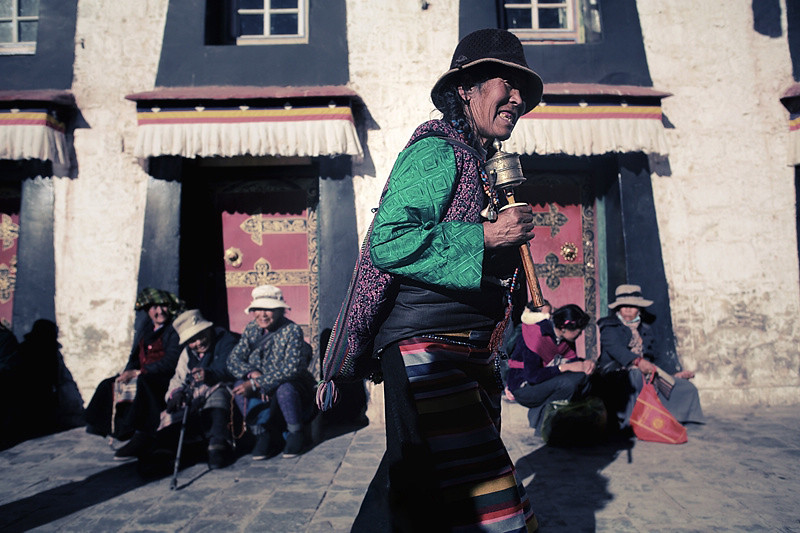 A Tibetan pilgrim is circling around Jokhang Temple.

Shortly after your arrival in Lhasa (3658m), the capital of Tibet, you instantly find yourself submerged by the mystique of exotic religion. With magnificent Potala Palace overlooking the historic Lhasa city on the Red Hill, you are bathed under typical blinding sunshine on the Qinghai-Tibet Plateau. Walking beside you are the pious Tibetan pilgrims, who are circling holy Tibetan monasteries while spinning their hand-held prayer wheels and chatting Buddhist mantras.

As you move closer to Jokhang Temple, the spiritual heart of Tibet, you can smell the aromatic smoke floating in the air. It’s the special offering, burnt with pine and cypress branches by Tibetan pilgrims, for worshipping Tibetan Buddhas and deities of sacred mountains and rivers. The most amazing scene would be full-body prostration, done by the fervent Tibetan pilgrims, young and old, before Jokhang Temple. 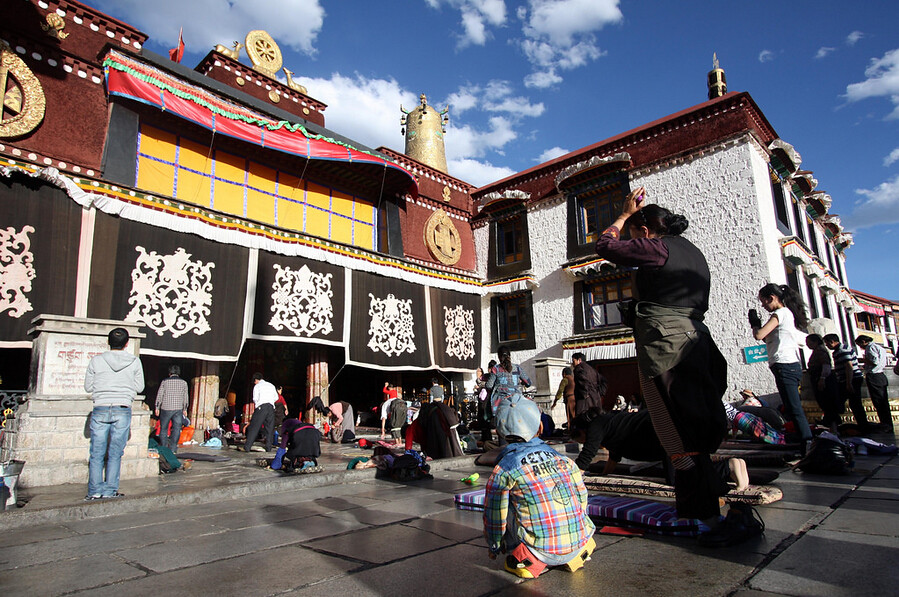 Crowds of Tibetan pilgrims prostrating before Jokhang Temple in Lhasa

In fact, 90% of Tibetans are pious Tibetan Buddhists. A rough estimate, there are over 6000 Tibetan monasteries and temples dotted throughout massive Tibet. Literally, every mountain pass you pass will be adorned with colorful prayer flags and Mani Stones, engraved with Buddhist scriptures. Besides, the intriguing daily life of Tibetan monks in different monasteries and temples is also worth your exploration.

With an average altitude of above 4000m, Tibet is crowned as the “Roof of the world”. It shares borders with India, Nepal, Myanmar and Bhutan to the south. Amid the 6 awe-inspiring mountain ranges that run through Tibet, the most notable one is the majestic Himalayas. To world-wide photographers, mountaineers, and other outdoor enthusiasts, etc. touring Tibet, esp. the world’s summit Mt. Everest (8844.43m) at Everest Base Camp (5200m) has long been their lifetime dream. 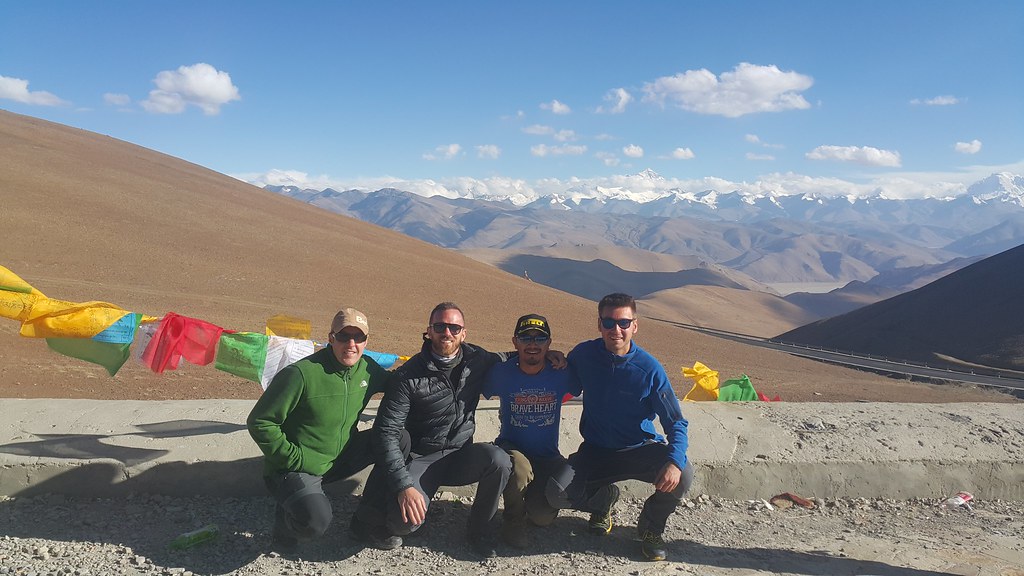 Some of the well-known towering mountains in Tibet with an average elevation of above 800m include Mt. Everest (8844.43m), Mt. Lhotse (8,516m), and Mt. Makalu (8463m), Cho Oyou (8201m), Shishapangma(8012m). In addition, Mt. Kailash, believed to be the “king of holy mountains” in Tibetan Buddhism, Hinduism, Bon religion and Janism, draws a sizeable number of global tourists with varied religious beliefs to visit each year. 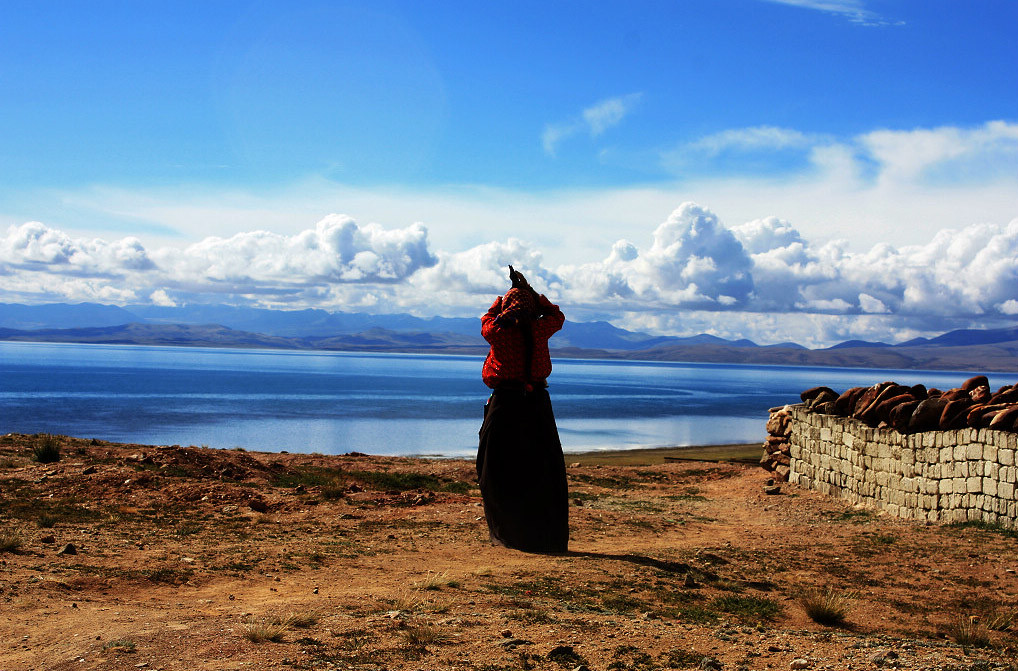 Tibetan pilgrim is worshipping the sacred Manasarovar Lake in Ngari.

Apart from that, the sublime view of holy lakes in Tibet also serves as a big draw for world-wide tourists. The biggest feature of alpine lakes in Tibet often involves boundless lakes with turquoise and sapphire color against the backdrop of spectacular snow-capped mountains. With fluffy clouds hovering low in the sky, the surrealistic beauty of holy lakes simply defies description. Top three sacred lakes in Tibet are Yamdrok Lake, Namtso Lake and Manasarovar Lake. Each one with distinctive beauty and all are worth a visit.

Scarcely can you find a place than Tibet where both religious and secular life coexists so harmoniously in society. In Lhasa, in the early morning, you can see a ceaseless flow of Tibetans of all ages doing the religious circling (also known as kora) to holy monasteries like Jokhang Temple and Potala Palace, etc. It seems that nothing matters more than praying and worshipping their Buddha in their daily life.

No matter poor or rich, all Tibetans have a small Buddha altar enshrined in the family. They prefer wearing accessories like turquoise, Buddhist beads and amber and coral, etc., which are believed to be auspicious and lucky in Tibetan Buddhism. They never eat fish, donkey and horse and dogs for survival. Of course, the most obvious influence of Tibetan Buddhism on Tibetans’ life can be seen from the celebration of traditional Tibetan festivals, like Losar (Tibetan New Year), Shoton Festival, etc. 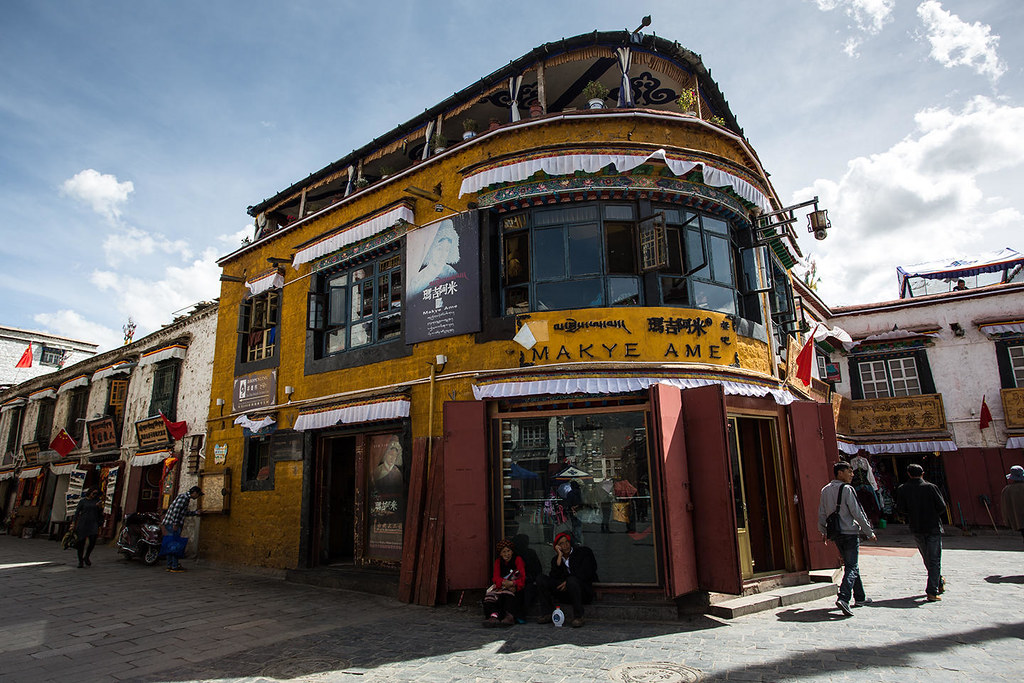 Have dinner in famous Makye Ame Restaurant in Barkhor Street

In the meantime, Tibetans lead a relaxing and fulfilled life. After the kora in the morning, they would normally enjoy a couple of sweet teas while chatting with their friends in a local teahouse. The unusually lively atmosphere unites people of all walks of life like a big family. You can also visit many traditional handiworks workshops, such as exquisite Thankga painting and Tibetan incense making, etc. of course, for the young generation of Tibetans, they are never strange to modern gadgets like IPhone, or internet and other trendy pursuits. 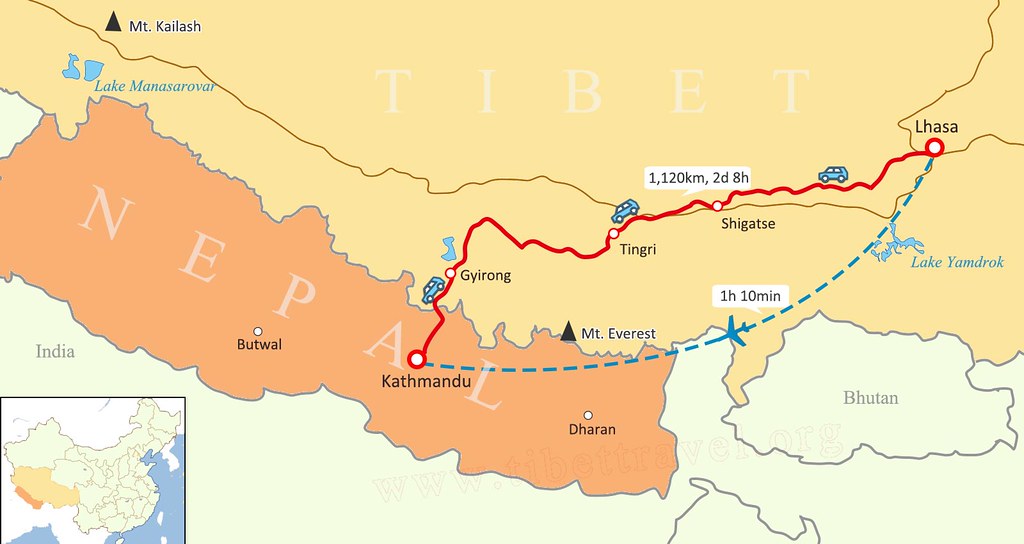 If you intend to visit Nepal from China, Tibet is definitely a must-visit place. Proximity to Nepal makes Lhasa to Kathmandu overland tour the most classic tour in Asia. Tourists can appreciate full grandeur of mighty Himalayas by trekking to north and south Everest Base Camps in Tibet and Nepal. From a Buddhist realm to a kingdom of trekking and mountaineering dominated by Hinduism, the jaw-dropping topography and varied flora and fauna along the way would easily take your breath away.

Overall, travelling in a deeply religious place like Tibet, your tour will absolutely be a journey of spiritual rediscovery. Imaginably, you will gain new perspectives into life, religion and meaning of happiness.