48 Hours In Athens, Greece: Everything You Need To Know

Most travelers breeze through Athens, Greece, opting to give precedence to the enchanting Greek islands over the rough-around-the-edges capital city. And honestly, we weren’t all that different. Dan had firm dates that he had to be in Santorini to photograph a yoga retreat, which meant that we only had a few days in Athens before we were “forced” to take the ferry to Santorini.

All in all we spent about six weeks island hopping around Santorini and the Dodecanese islands, and we can eagerly agree that they are just as magical as the reputation that precedes them. I don’t think we would have changed a thing, except that we wish we had allotted a few more days to discovering Athens. We were pleasantly surprised by Athens. We were visiting during the economic crisis, so we weren’t really all that sure what to expect. (And if you turned on the news during the protests, then you would have assumed the worst.) But what we discovered was an edgy city of contrasts. A breathtaking view of the Acropolis is never too far away (though neither is street art and graffiti.) Great restaurants, world-class shopping, and an efficient metro add to the joy of exploring the city and provide a welcome distraction when you’ve had all the epic ruins and museums that you can handle. 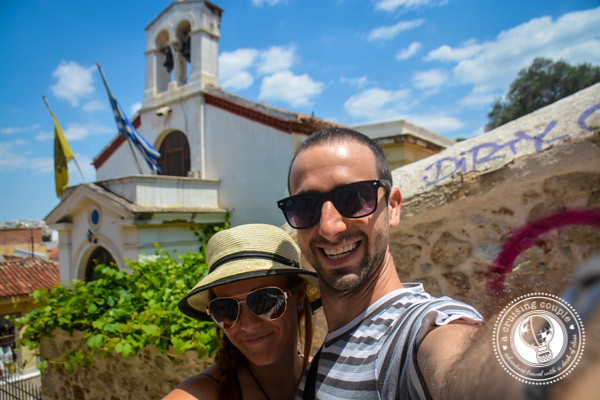 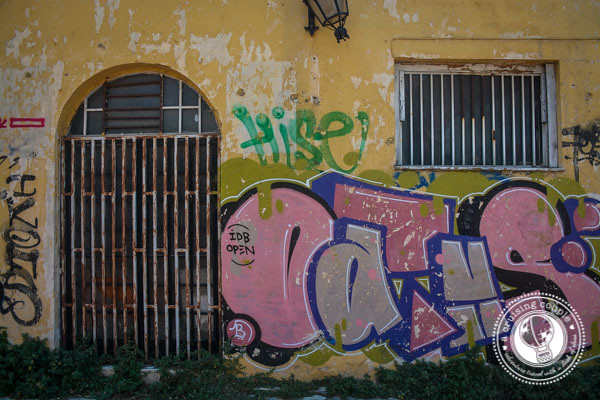 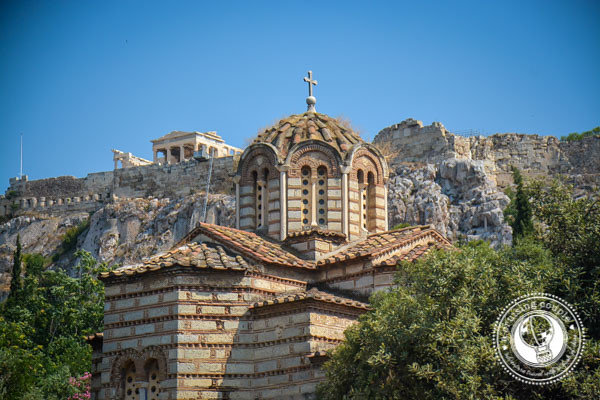 If you have longer than 48 hours in Athens, Greece—take it. You wont be disappointed. However, if you’re traveling on a time crunch and still want to experience the best the city has to offer, here’s our quick and dirty guide to 48 hours in Athens:

What To Do In 48 Hours In Athens, Greece

It’s not easy to wake up early in Greece, largely because dinner stretches on late into the evening. However, for your short stint in Athens, we recommend making the most of the mornings. There’s a lot to see and do, and you’ll want to beat the crowds.

Day One In Athens 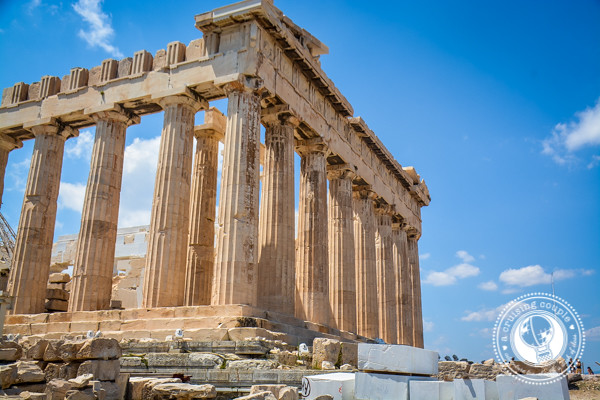 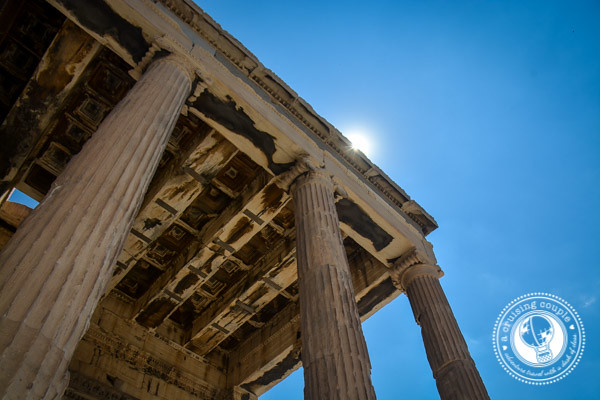 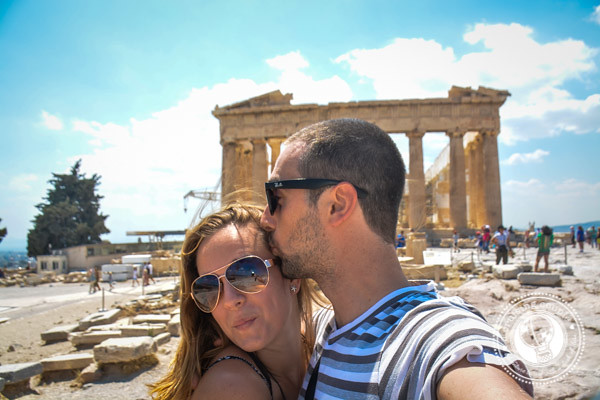 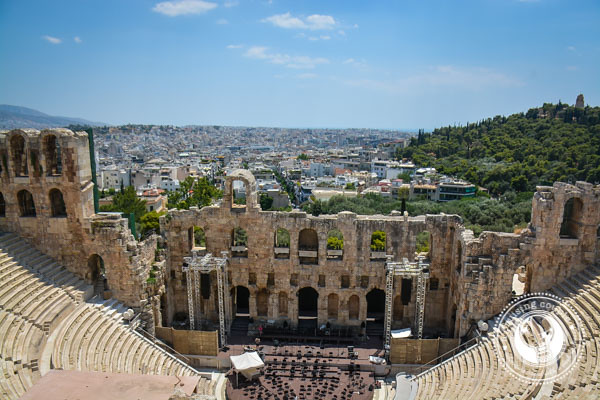 Start your exploration at one of the most famous sites in the world: The Acropolis. The ancient fortified town of Athens dates back to the 5th century BC, and is easily noted for its iconic location perched upon a high rock, towering above the surrounding landscape. The Acropolis Ruins includes the Parthenon, as well as various other ruins of astonishing proportions such as The Erecthion and the Temple of Athena Nike. Walking around The Acropolis will take a few hours depending on how many photos you take and how interested you are in learning about the sites. Be sure to purchase a bulk pass for 12 euros that will get you into just about all of the ancient ruins in Athens, valid for four days.

Lunch At The Acropolis Museum Cafe And Restaurant 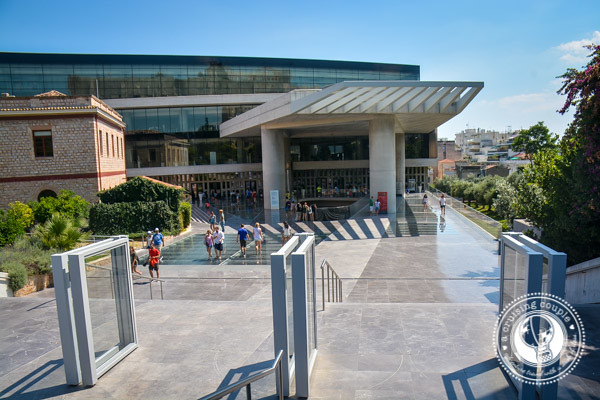 After all that exploring, chances are you’re ready to sit down and enjoy some delicious Greek cuisine. Head to the nearby Acropolis Museum Cafe and Restaurant where you can enjoy fantastic views of the acropolis from the 700-square meter public terrace. We chose the fresh steamed mussels with ouzo, and though we typically don’t love the flavor of ouzo, this subtle flavor was perfect when paired with seafood. 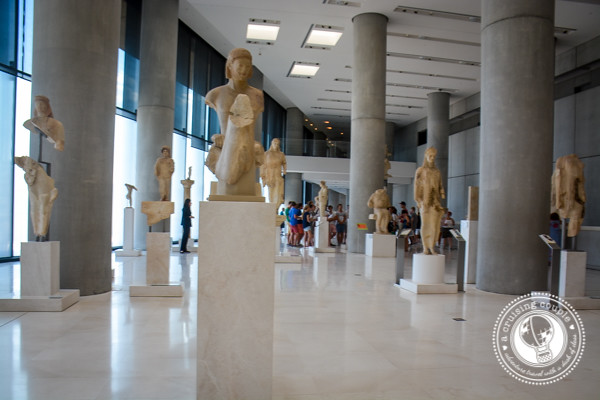 Since you’re already at the museum, finish up your full day of exploring the Acropolis by checking out the Acropolis Museum. As the name suggests, the museum covers everything pertaining to the archeological site of the Acropolis. It provides excellent information that explains everything you saw while wandering around the actual ruins earlier in the morning. What’s more, general admission to the museum is only five euros. 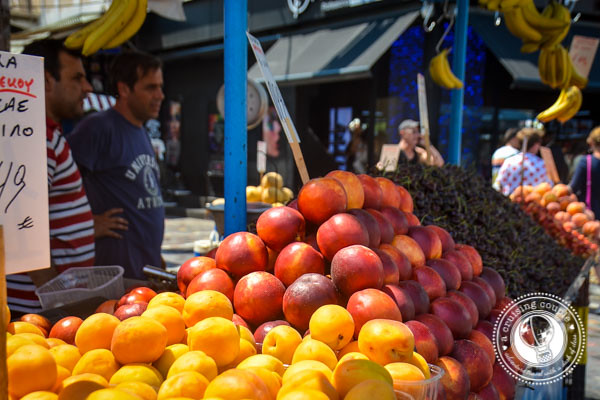 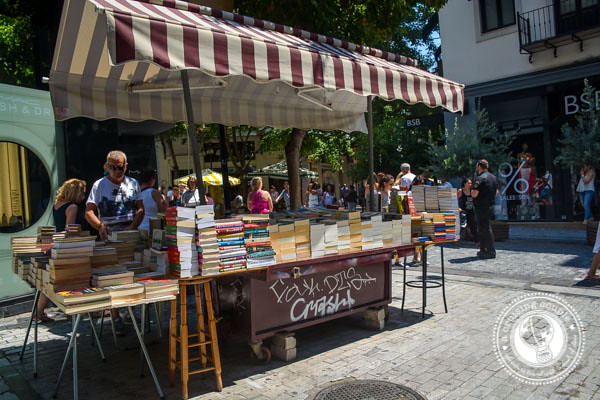 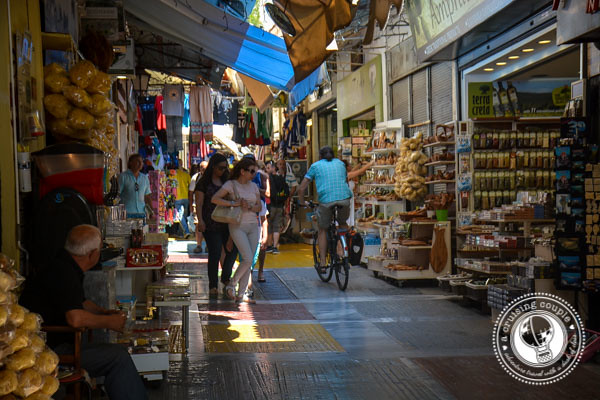 If you’re exhausted, then head back to your hotel to relax before dinner. But if you still have a bit of energy in you, then head to the popular shopping district Monastiraki. The eclectic shops are undeniably touristy, but the streets here make an amusing place to window shop or take home a few souvenirs. And for those who are really looking to bargain hunt, time your visit on a Sunday morning when the Monastiraki Flea Market is bustling. We found a typewriter here I was dying to bring home, but since it was the start of our two months in Europe, Dan insisted I reconsider.

This unpretentious restaurant is as authentically delicious as could be. I recommend the Kirtharoto, mushroom orzo with parmesan and white truffle oil, or the Moussaka. You’ll want to make reservations as Tzitzikas Kai Mermingas is relatively well-known and it gets busy on the weeknights. This was one of our favorite meals we ate during our entire Greece trip, so don’t miss it if you get the chance. 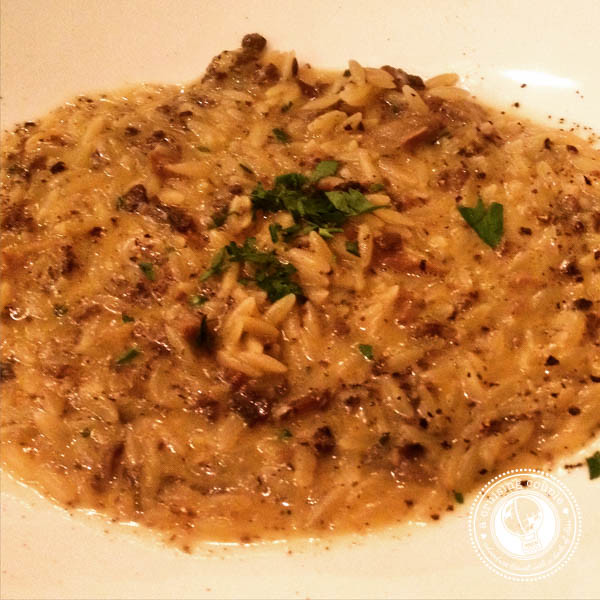 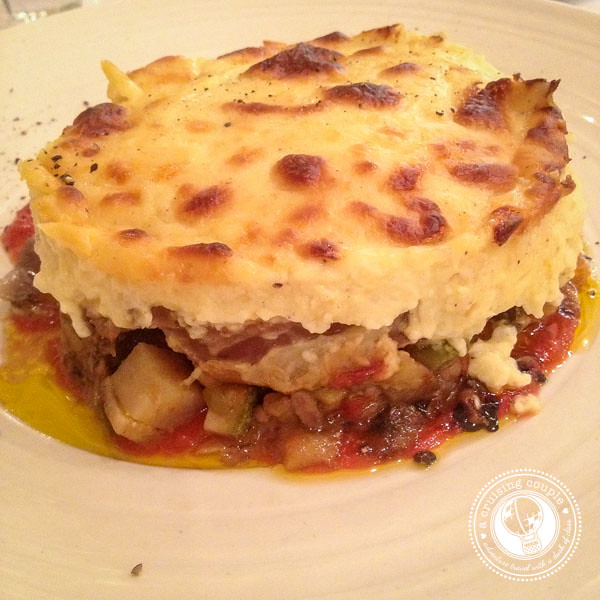 We opted to enjoy some wine and night caps at the restaurant, but there are plenty of other bars within walking distance if you prefer to mix it up a bit. 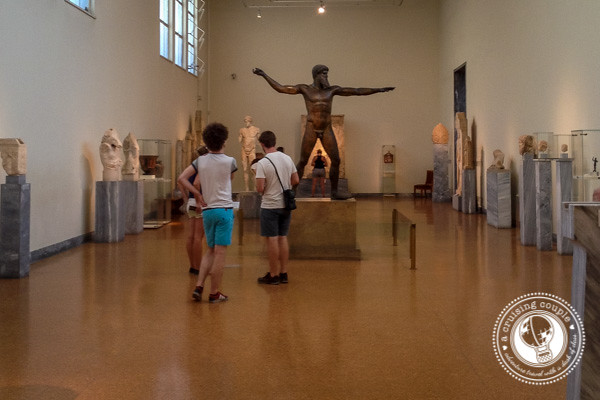 After a leisurely breakfast of Greek yogurt and a frappe, head to the National Archeological Museum. This museum houses some of the most important artifacts from a variety of archaeological locations around Greece, from prehistory to late antiquity. You can spend as long or as little as you like here, but it is certainly a site you won’t want to miss while in Athens.

The Agora and Temple Of Hephaestus 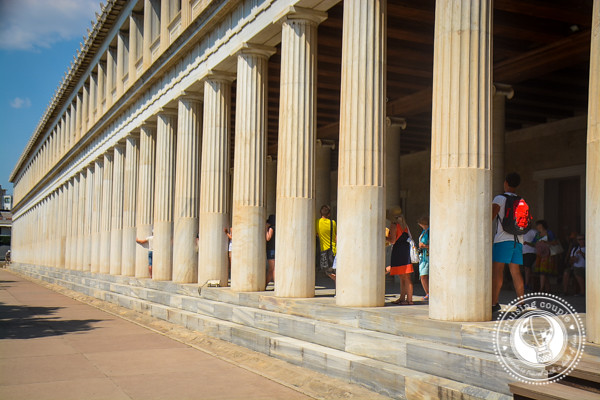 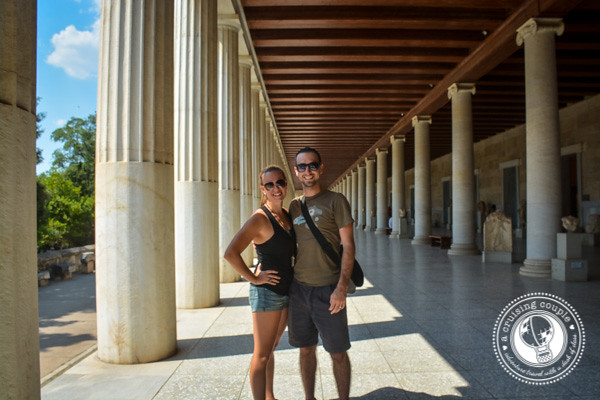 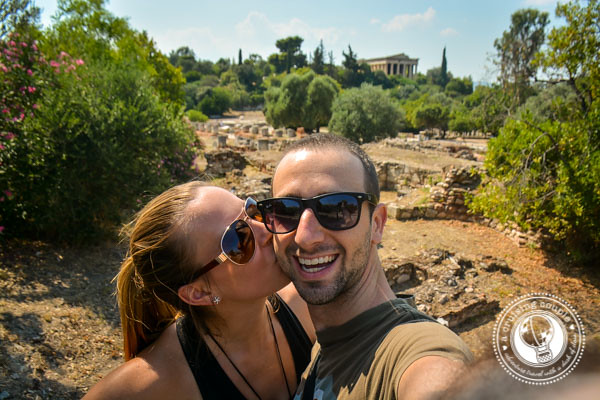 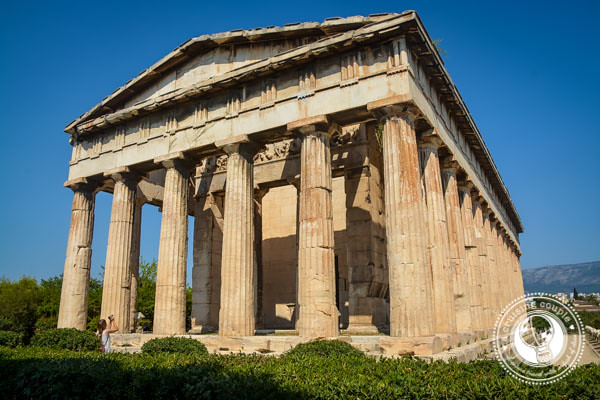 Now it’s time to marvel at one of our favorite sites in Athens: The Agora and the Temple of Hephaestus. Both of these ruins are absolutely astonishing in scale and detail. The Ancient Agora is considered to be the best-known example of an ancient Greek agora, or an ancient marketplace and civic center; The Temple Of Hephaestus is thought to be one of the best-preserved temples in Greece. It’s easy to walk around these ruins and see both in about an hour.

Lunch And Shopping In Plaka 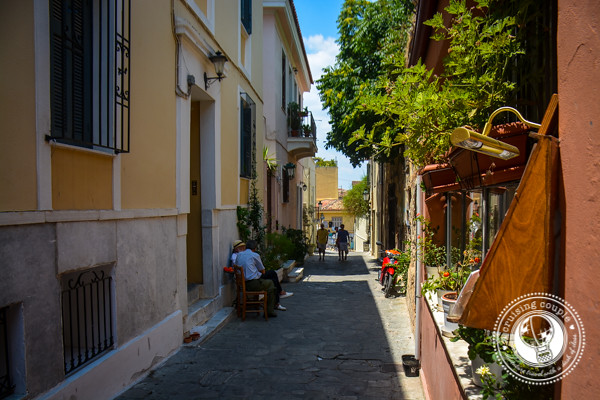 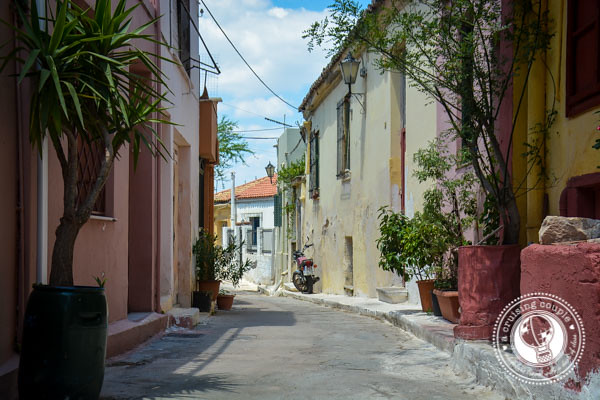 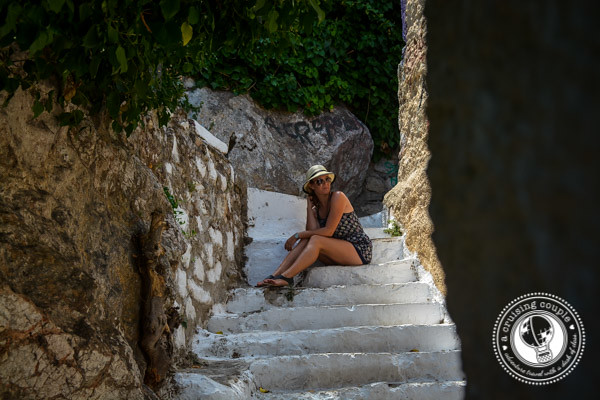 Now it’s time to process the ancient history you just witnessed over lunch. We recommend stopping at a small street-side restaurant serving up souvlaki or gyro pitas for only a few euros. Alternatively, there are plenty of trendy restaurants with lovely terraces that dot the area around nearby Plaka. After lunch, take time to explore Plaka, The Old City offers a glimpse into what life was like in Athens in the past, and is as idyllic as could be. Most of the streets are pedestrian-only, making it a wonderful place to take photographs and enjoy the tranquility. We wandered around here for a few hours, stopping for coffee or a glass of wine whenever we happened to pass a charming restaurant (which was quite often.)

Again here you have the option to relax before dinner or tackle one more adventure. If you’re up for the hike, then we recommend climbing up Mount Lycabettus at twilight to enjoy the stunning views of Athens and the Acropolis. The hill is also located outside of the bustling city center, making it a nice place to breath in the fresh wooded air if you need a break from the congestion. We actually didn’t make the climb ourselves since we were staying at St. George Lycabettus, a hotel with the same stunning views (and a rooftop pool and bar!) See below :)

We recommend basing your entire stay here, but at the very least head to the restaurant for dinner or drinks—and a phenomenal view of Athens. Both nights we stayed here we enjoyed glasses of wine as the Acropolis twinkled in the distance and Athens sprawled beneath us. 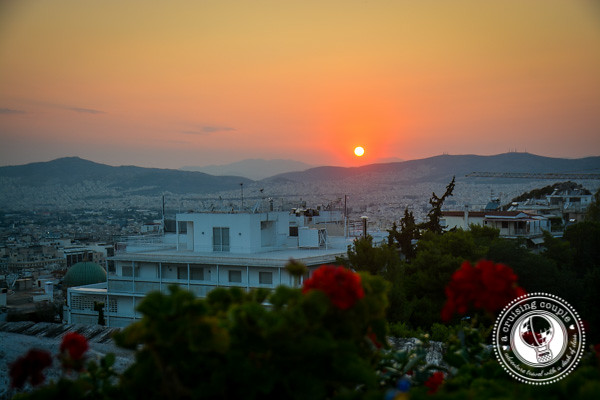 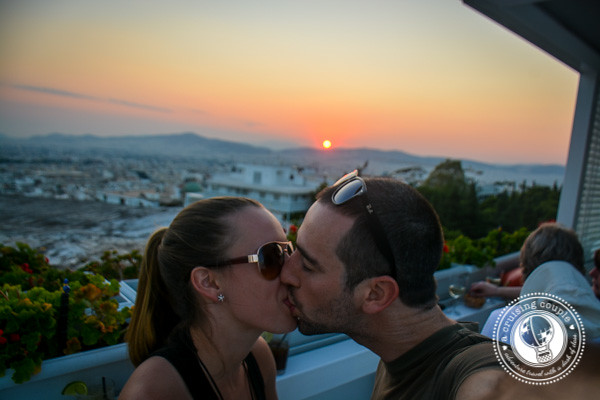 And there you have it—48 hours in Athens! That doesn’t even brush the surface of all there is to see and do, but it is definitely an appropriate amount to try to squeeze into two days. If you do have more time, don’t miss the massive Temple of Olympian Zeus, Hadrian’s Arch, and Syntagma Square (which you’ll likely see walking around anyway.) You’ll also be spoilt for choice when it comes to theater performances, outdoor movie theaters and cultural performances… the list really does go on and on!

As we mentioned above, we stayed at St. George Lycabettus Boutique Hotel. We found excellent last-minute deals as many people were canceling their travel plans due to uncertainty over the economic crisis and what conditions in Athens would be like. We actually thought about trying to stay one more night, but the in-hotel rate was three times what we paid online!

Whether you’re booking last minute (like we were) or planning a weekend escape earlier in advance, we recommend checking out HotelPlanner to see what great deals you can score in Athens, or elsewhere for that matter.

Ready to start planning your adventure to Athens, Greece? Don’t forget about your travel insurance. We always travel with insurance, and it was one of the reasons why we weren’t overly worried about traveling to Greece during the economic crisis. You never know what could happen, so we suggest playing it safe.

Have you visited Athens before? What did you think?

This post was made possible by Hotel Planner. As always, all thoughts and opinions are our own.