6 of the Most Daring Daredevils in Niagara Falls History

While most people prefer to marvel at Niagara’s majestic and voluminous display of water from an observation deck or boat, the daredevil — that bloodthirsty maven of extreme experiences with his age-old knack for trying to defy death — has been present throughout the history of folks gawking at Niagara Falls, too. Ever ready to experience the majesty of the Falls in a bodily and first-hand way, daredevils have seen fit to tightrope walk across the Falls and careen down its massive flumes in everything from a barrel to nothing more than the clothes on their backs.

Amidst the many tales, triumphs, and terrors of individuals who were determined to take on Niagara Falls, some stories rise to the top as worthy of being told, time and time again — and they’re not all success stories. Here are six such tales and the daredevils who were their authors that have found ongoing notoriety throughout Niagara Falls’ lengthy history of adventure-seeking and hooliganism. 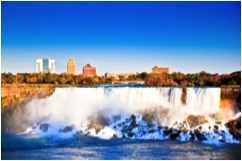 Back in 1901, 63-year-old Annie Edison Taylor became the first person to go over the Falls in a barrel, and the fact that she survived is still a remarkable feat. A penniless widow, Taylor devised the scheme as a way of making money. To that end, she hired a manager and designed her own barrel that was pumped up with a bicycle pump to 30 PSI after she climbed inside.

While she survived the plunge with little more than some bruises, she unfortunately didn’t find the fortunes she had hoped for on the other side of her barrel adventure. Instead, she worked as a street vendor in Niagara Falls for the next 20 years and died as poor as she was the day she conquered the Falls.

A recent tightrope walking hero of sorts, Nik Wallenda petitioned the Canadian and American governments for two years to get permission to traverse Niagara Gorge. Tightrope walking has been banned at the Falls since 1896, but Wallenda, a third generation tightrope walker, wanted the chance to gain fame and glory for the feat.

After his wish was granted, he successfully walked across the Falls on June 15, 2012 in front of 129,000 disbelieving eyes. A stunt that earned Niagara Falls as much positive attention as it did Wallenda, a statue commemorating the feat has been erected on Goat Island.

In October 22, 2003, Kirk Jones survived his plunge over Niagara Falls wearing only his regular, everyday clothing. A simple plan that had been a goal of his for years, Jones entered the water about 100 yards upstream from the Falls, where he began swimming out into the quick-moving waters.

Roughly eight seconds later, he fell 175 feet amidst millions of gallons or crashing water, and swam to shore, bumped and bruised, but otherwise fine. Fined $2,300 for the plunge, Jones has also been banned from Canada for the rest of his life.

One of the tragic stories of Niagara Falls, Robert Overcracker rode a jet ski over the Horseshoe Falls in an attempt to bring attention to the plight of the homeless. Unfortunately, his parachute didn’t open, and his body was never recovered — a stark reminder of the grim realities that come along with being even a well-meaning and do-gooding daredevil. 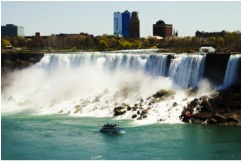 Long ago in the summer of 1859, the original Niagara Falls daredevil known as “The Great Blondin” started a series of tightrope walks across the Falls. Crowds as large as 25,000 people would watch amazed as Gravelet-Blondin crossed Niagara Gorge in increasingly interesting and difficult ways.

He rode a bicycle. He pushed a wheelbarrow. He crossed it with his arms and legs wrapped in chains. He even walked the tightrope with his manager on his back.

Another early daredevil, Maria Spelterina was a 23-year old woman from Italy, and to this day, she remains the only woman to ever cross the Falls on a tightrope. With a flair for the dramatic, Spelterina crossed the Niagara Gorge wearing woven baskets on her feet instead of shoes, and she covered her head with a paper bag. Even with these chosen difficulties, her trip was successful.

For well over 100 years, daredevils have sought their thrills at the hands of Niagara Falls, and while some have been more successful than others, their stories still thrill the eyes and ears of anyone taking in the tremendous power of this natural wonder.