In Search of the Best View in Rio de Janeiro: Our Top 5 Spots

It’s hardly any wonder why the Portuguese first called Rio de Janeiro ‘La Cidade Maravilhosa’. Shooting up between golden sand beaches and lofty green mountains, Rio de Janeiro is certainly a marvelous sight to behold. But while it’s possible to take in the beauty of the city from any of its vastly different neighborhoods, beaches or gardens, there’s no doubt about it: the brilliance of Rio is best appreciated when viewed from above. Which leads to the question: Where is the best view in Rio de Janeiro?

Luckily there are plenty of mountains and lookouts across the city that offer panoramic views of Rio de Janiero. We made it our personal mission to tackle as many as possible and then report back to the blog with our findings.

So where is the best view in Rio de Janeiro? Here are our five favorite spots:

When it comes to the best views in Rio de Janeiro, the Arpoador is perhaps the most accessible. A giant rocky peninsula that juts out into the ocean between Copacabana and Ipanema Beach (and a popular Rio surfing spot), the Arpoador is a dreamy spot to come after a day sunbathing on Rio’s best beaches. The Arpoador is also a popular spot with the locals who come to enjoy the setting sun behind the iconic Dois Irmãos Mountains. So grab your drink of choice and enjoy this iconic Rio de Janeiro attraction. 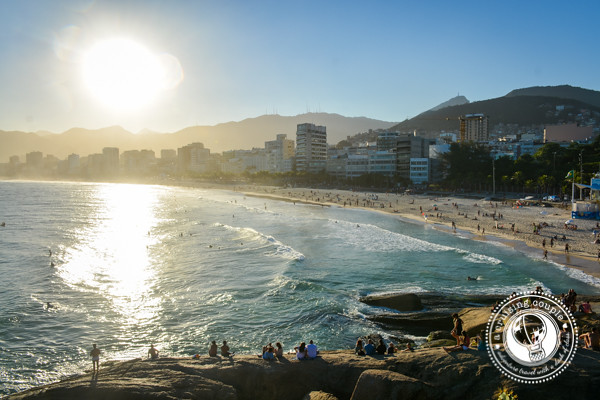 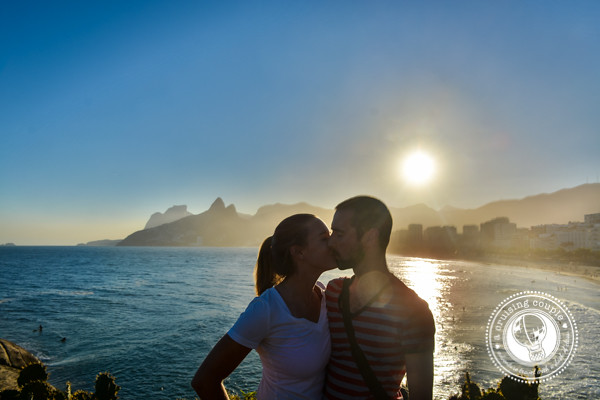 Walk along the pedestrian path that runs parallel to Ipanema Beach towards Copacabana (or reversely down Copacabana towards Ipanema). It’s impossible to miss it.

Seeting the Sunset at Arpoador Costs:

Nothing! But we do recommend getting a fresh coconut from one of the beachside vendors or a local beer to enjoy with what is undeniably one of the best views in Rio de Janeiro.

Not all that long ago, it wouldn’t have been possible to hike to the top of Dois Irmãos if you weren’t a resident of the Vidigal favela. But as a result of pacification and gentrification, today Vidigal is a thriving community that welcomes mindful tourism. Young people are increasingly proud to call the Vidigal favela home, and there is continued potential for community empowerment. You can read all about our six-week stay in the Vidigal favela here.

To access the viewpoint at the top of Dois Irmãos, you must take a steep trail beginning in the back of Vidigal. The hike is short but intense; if you’re fit, it will take around 45 minutes to an hour. The reward is well worth the effort. The viewpoint at the end of the trail affords incredible views over Rio, including Leblon and Ipanema. The hike to Dois Irmão is best at sunset or sunrise. Descending the back of the mountain, you’ll also have the opportunity to view Rocinha, the largest favela in Brazil. 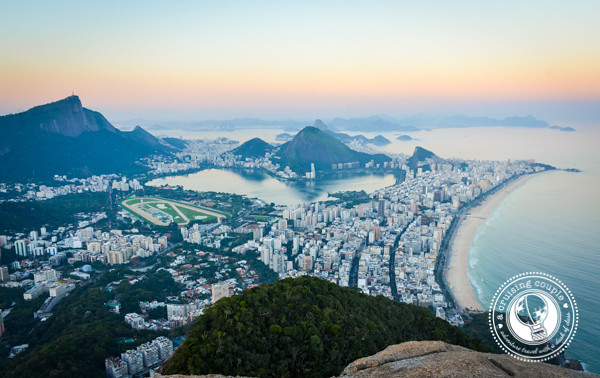 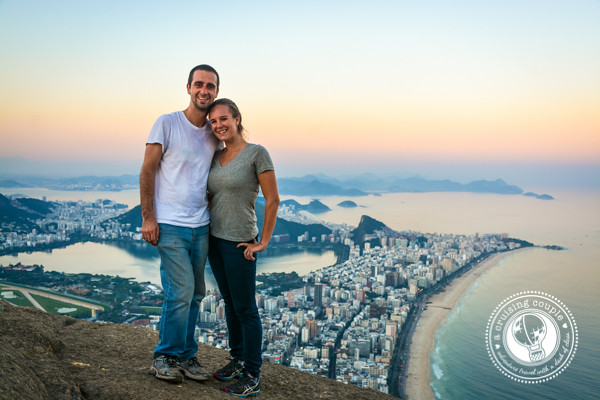 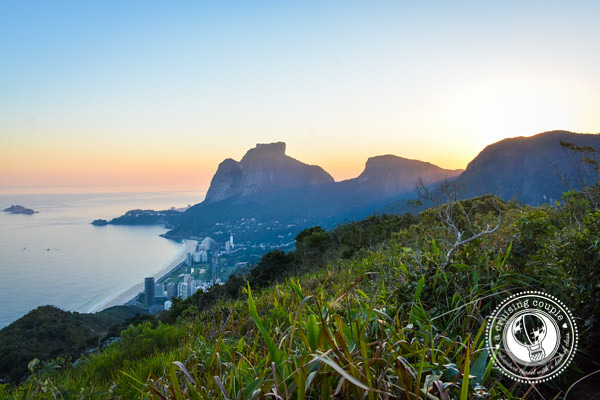 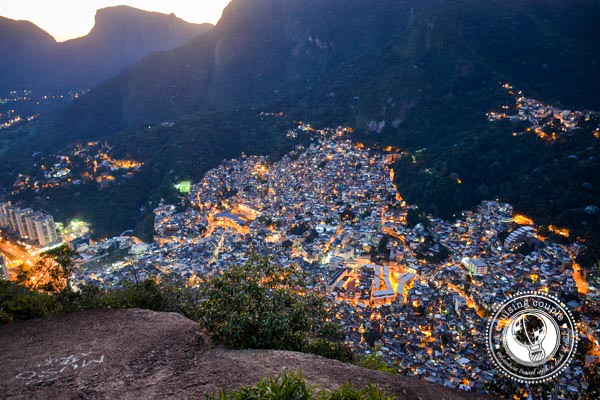 If you’d like to conquer the Dois Irmãos Mountain from sea level, start at Leblon’s end (near beach post 12.) Walk up Niemeyer Road, past the Sheraton, until you reach your first stoplight. Here, turn right into Vidigal. Then you have a long walk straight up through the favela. Ask the locals or the police stations to find the entrance to Dois Irmãos—everyone knows and will be more than happy to point you in the correct direction. Alternatively, you can hop in a moto-taxi at the base of Vidigal and ask them to drop you at the trailhead, or take a guided hiking tour.

Nothing, unless you opt for a guided tour of course.

Morro de Urca and Sugarloaf Mountain are in the heart of Rio de Janeiro and offer spectacular views over the entire city. Two separate gondola rides take you from Praia Vermelha to Morro de Urca (220 meters high) and then on to Sugarloaf (528 meters high). Each trip lasts about 3 minutes, and the cable cars have 360-degree windows looking out over Copacabana, Botafogo, Corcovado, Guanabara Bay, Downtown Rio, and the Rio-Niteroi Bridge.

You’ll likely have to share the viewpoint with a crowd of other tourists, but it doesn’t take long to see why these gondolas are such a popular Rio de Janeiro thing to do. The views from Morro de Urca and Sugarloaf Mountain are quite actually jaw-dropping. Numerous vantage points around the mountains offer some of the best views of Rio de Janeiro and the surrounding seascape. 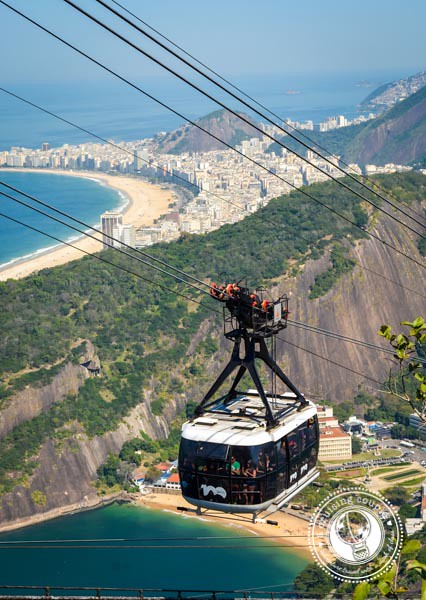 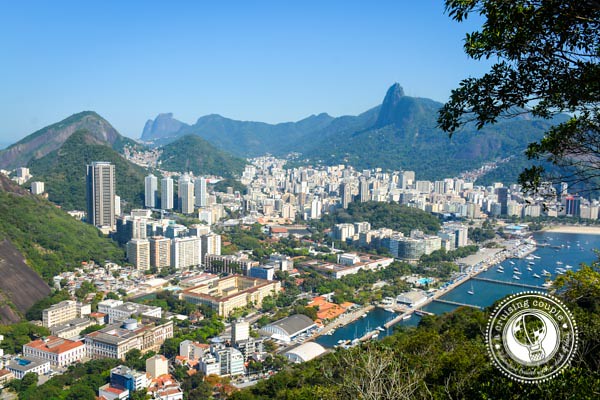 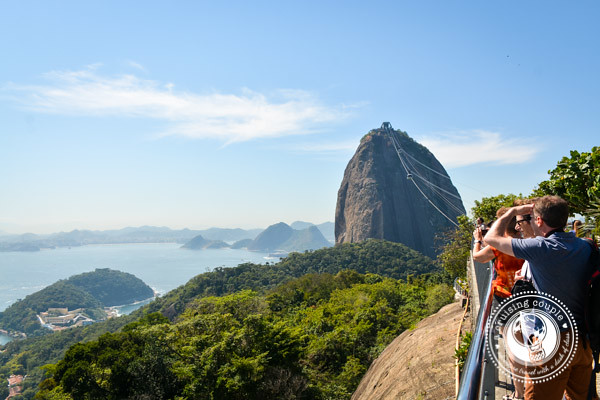 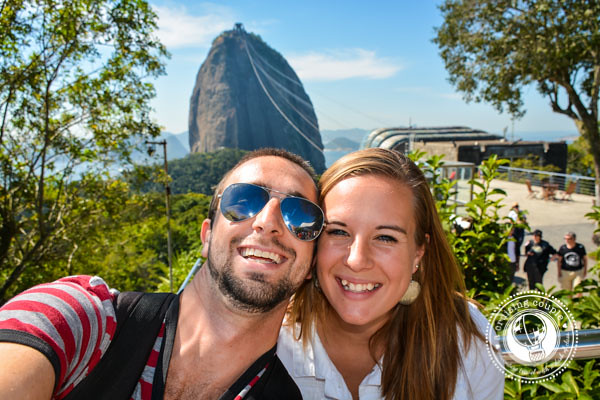 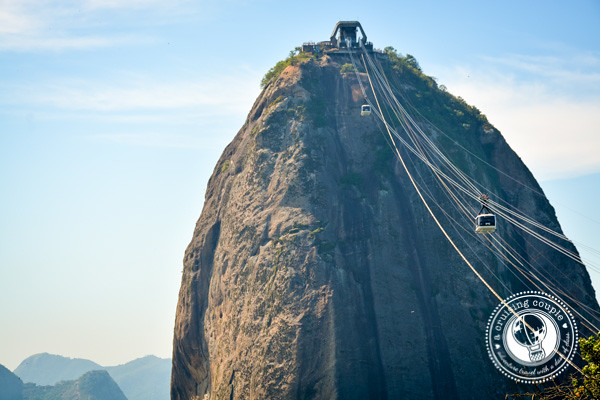 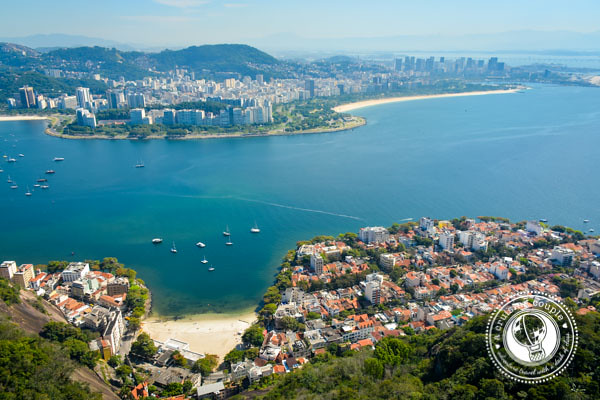 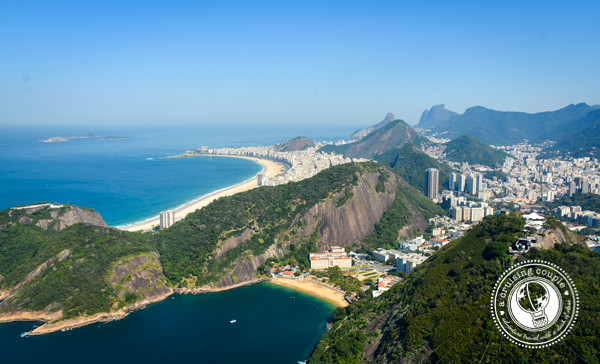 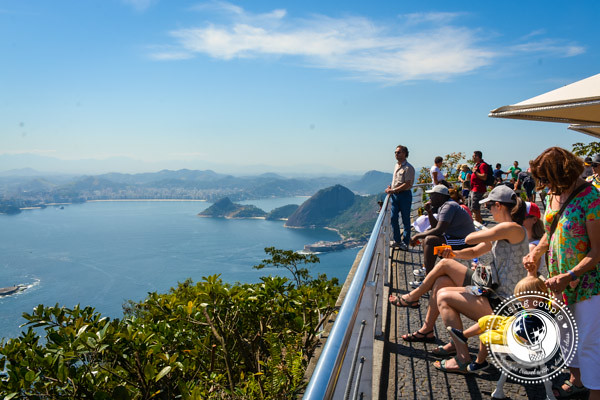 There are a handful of guided tours available that will pick you up at your hotel and take you to Morro de Urca and Sugarloaf; along the way, your guide will point out various highlights of Rio de Janeiro. If you’re pressed for time and want to pack in the highlights of Rio de Janeiro sightseeing, this is a fantastic option. Taxis are not all that cheap, and traffic along Ipanema and Rio’s center can be a nightmare.

We were invited by Viator to participate in their guided tour to Sugarloaf Mountain, and we were delighted that we did. Along the drive, iconic sights such as the Sambodromo, the Theatro Municipal, and the conical Catedral Metropolitana were pointed out and explained. But perhaps the best part of going with a tour was that when we arrived at Morro de Urca, we didn’t have to wait in line! We were promptly given our gondola tickets and able to begin our exploration of the two lookout points immediately. We had plenty of time to snap photographs independently and enjoy the expansive views over Rio before returning to our hotel.

It is also possible to take a bus to Praia Vermelha and purchase a gondola ticket independently. It was once possible to hike up Morro de Urca by foot and take the cable car the rest of the way for free, but now you must display a ticket whenever you want to ride the gondola, going up or down. You can still hike up Morro de Urca, but you will also need to hike down.

For those seeking a bit more adventure, there are rock-climbing tours that climb Sugarloaf Mountain’s face up to the very top. We hoped that we would be in good enough shape to do this before we left, but unfortunately, it just didn’t happen. Luckily, our tour with Viator was the perfect alternative.

The Gondola Ride To The Top of Sugarloaf Mountain Costs:

Tours vary but typically cost about $77 USD. A gondola ticket to the top of Sugarloaf costs R$116 for adults and half-price for children.

The Tijuca National Park is an urban forest that was previously cleared and used for growing coffee and sugar. The area was reclaimed and replanted after environmental concerns in the second half of the 19th century. The vegetation is now so dense that scientists estimate the temperature in the surrounding areas has declined by up to 9 degrees Celsius!

The Tijuca National Park also contains hundreds of species of plants and wildlife, including the adorable and curious coati. The highest peak inside the National Park (and Rio’s highest mountain) is, perhaps not surprisingly, Tijuca Peak. There are two lookouts on the trail leading up to the Tijuca Peak. The first one is named Tijuca Mirim Peak and boasts unobstructed views of Downtown Rio, including the newly renovated Maracanã Stadium (where the 2014 FIFA World Cup Final happened.) Continue on the trail for about 10 minutes, and you’ll arrive at Tijuca Peak. We thought the views at Mirim Peak were better, but you’ll be able to boast that you made it to the very top of Rio’s highest mountain if you continue here. 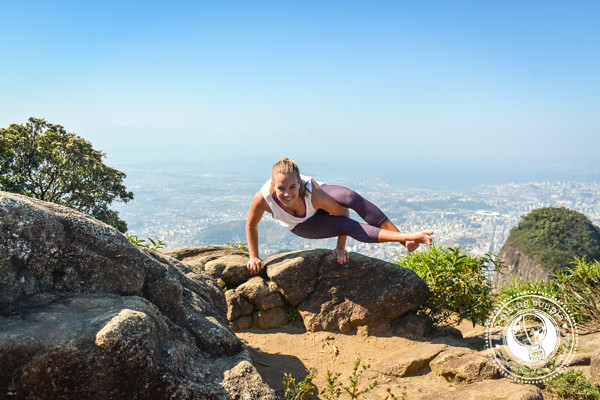 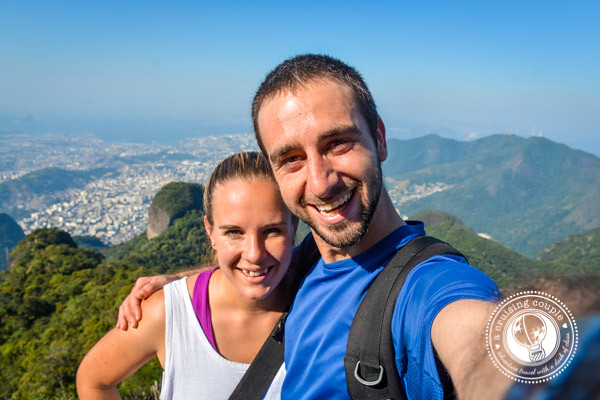 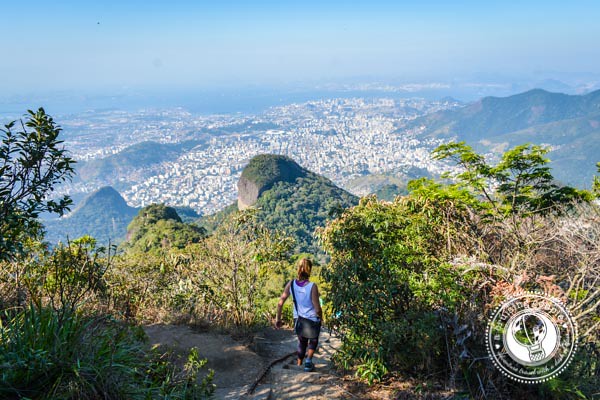 To Get to This View of Rio de Janeiro:

Take a taxi from the city and ask for Parque Nacional da Tijuca. Ask the driver to take you all the way to the top—it’s a long way from the entrance of the park to the trailhead, though admittedly we did decide to walk it all ourselves. Though the hike arrives at the highest peak, the climb is actually not all that difficult.

There is no fee to enter the park, but a taxi from Copacabana will run around R$60.

You see it, and instantly, you know you’ve arrived in Rio de Janeiro. There are few more iconic statues than Christ the Redeemer, the 38-meter high replica of Christ watching over the city and visible from nearly every corner. We never made it to Corcovado Mountain to get up close and personal with the Redeemer ourselves. We saved the outing for the end of our stay in Rio, which was then, of course, full of cloudy and rainy days obstructing any chance of a view over Rio de Janeiro. But hey—at least we now have an excuse to make it back to Rio! 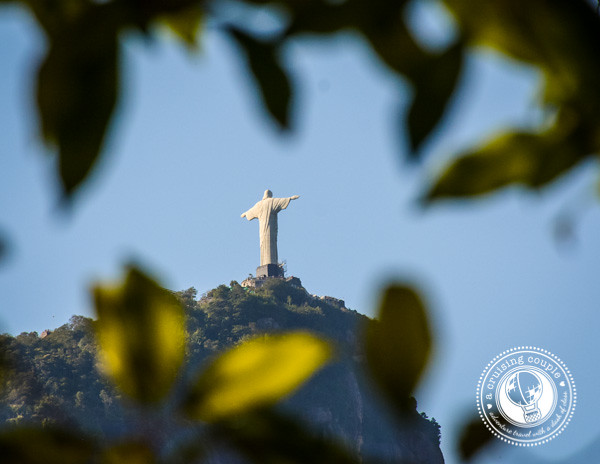 To Get To This View of Rio de Janeiro:

A popular route to arrive at the Christ the Redeemer Statue is via the scenic Corcovado Railway. The 20-minute train ride takes you through another area of the Tijuca National Park. For a quicker ride, there are official vans that carry people straight to the top. Lastly, there are several hiking trails that lead to Christ the Redeemer. The main trail begins in the Botanical Gardens in Parque Lage and takes about 2 hours through the National Park.

Update: Since we visited Rio de Janeiro, the Christ The Redeemer’s hiking path has been plagued with robberies. The hike begins at a clearly marked security house, so we recommend inquiring about the trail’s current safety before departing.

So those are the contenders, which brings us back to our initial question: Where is the best view in Rio de Janeiro?

Each vantage point offers a unique perspective of la Cidade Maravilhosa, and the journeys to the top of each point are different enough to keep things interesting. So we say—visit as many Rio de Janeiro viewpoints as your itinerary allows! If you have to narrow it down, don’t miss Sugarloaf Mountain and Two Brothers Mountain. The two complement each other nicely and together deliver some of the best photo ops in all of Rio de Janeiro.

Have you been to Rio de Janeiro? Where was your favorite view of the city?