Learning to Surf in Costa Rica | An Embarrassing Photo Account

I’ll be honest. I wasn’t all that excited for the surfing aspect of our surf and yoga retreat. Sure, I’ve always wanted to join the big kids on their waves, looking cool, getting barreled, and doing whatever else surfers do.  But this wasn’t my first time trying to stand up on a surfboard, and I was prepared for the inevitable—when it comes to balancing on a board that’s being propelled forward by a surge of water, I’m just not a natural.

Dan, on the other hand, is a bit like a little kid when he’s near the ocean. We’ll be walking down to the beach when suddenly he’ll involuntarily break into a bit of a walk-skip-run as he’s approaching the shoreline. It’s kind of adorable. Needless to say, the surfing lessons were primarily for me.

While I didn’t go into my surf lessons expecting to become a master, I did plan on having a good time. Luckily, Mark—the instructor—had the same idea. 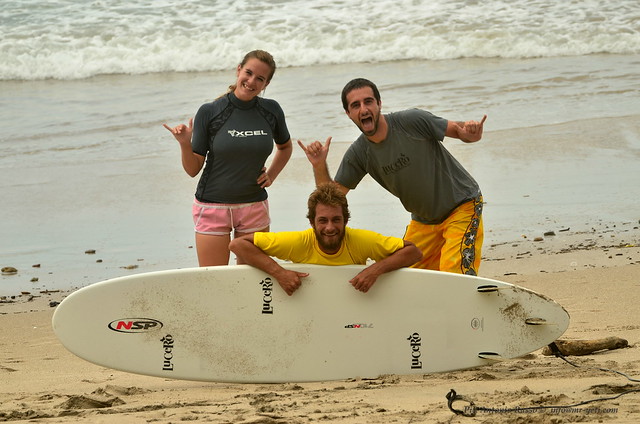 Before we even went out to the beach, our lesson began with the standard ‘lay on the board and practice your pop up’. This part was easily manageable: push-up stance, balanced weight, quick jump, and wide legs.  When Mark said we were practicing this part on the patio of our hotel so we could just strut out on the beach looking like pros, I could have hugged him. Though I wasn’t sure how long our façade would hold out… 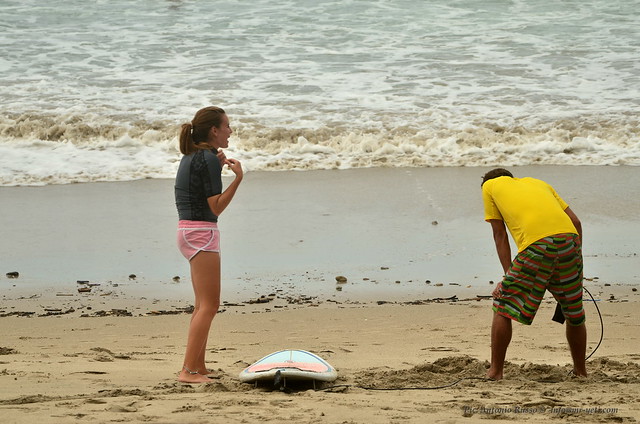 One of the best parts of Santa Teresa is that, no matter the day, row after row of waves break cleanly across the shore. Dan could take his surfboard to the outer edge while I safely practiced on the white water closer to shore. Even better, with such a long and spread out break, I was never in danger of other beginners whacking me on the head with their boards (something we did observe often on other beaches).

Although I wouldn’t say I have a fear of the ocean, I was very grateful to have Mark around as my teacher. He was knowledgeable but laid-back, putting me at complete ease. Before each wave he would steadily hold my board, counting down and yelling at the perfect moment when to step forward. When I kept making the same mistakes over and over again, like not widening my stance or sticking my butt out too far, he never showed any annoyance. It was clear he had listened to me when I told him my goal was to have a fun and entertaining afternoon.

By some miracle, by the end of our lessons I was actually standing up more than I was belly flopping into the water. It took about five hundred attempts to get there, and unfortunately there’s no photographic proof of my best rides, but it happened—and I was thrilled.

Of course, there are a lot of photos of me learning to surf. Dan and I laughed out loud at more than one of them, so we decided we just had to share them with all of you. I hope if they don’t give you a good chuckle, they at least inspire you to get out and try something new. You won’t be the only person out there making a fool out of themselves! 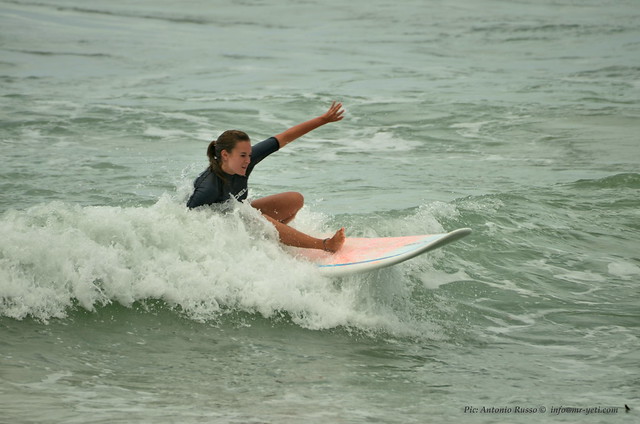 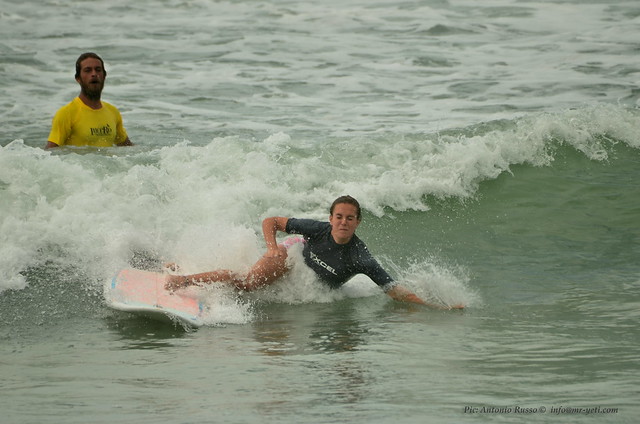 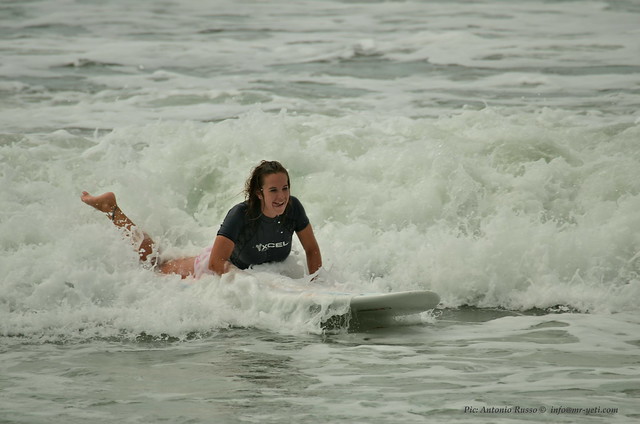 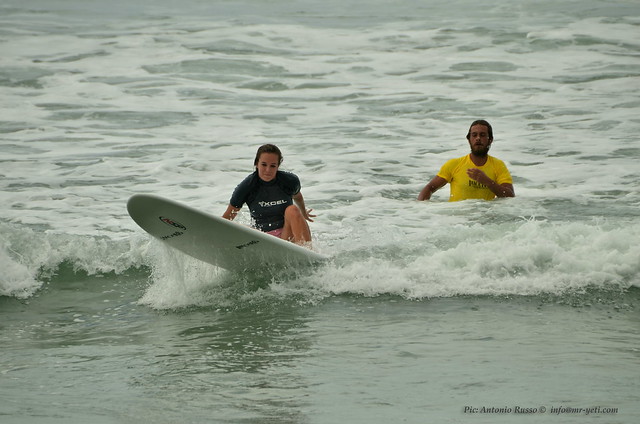 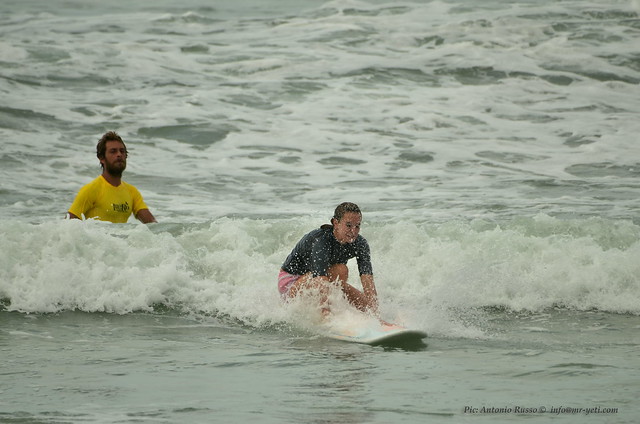 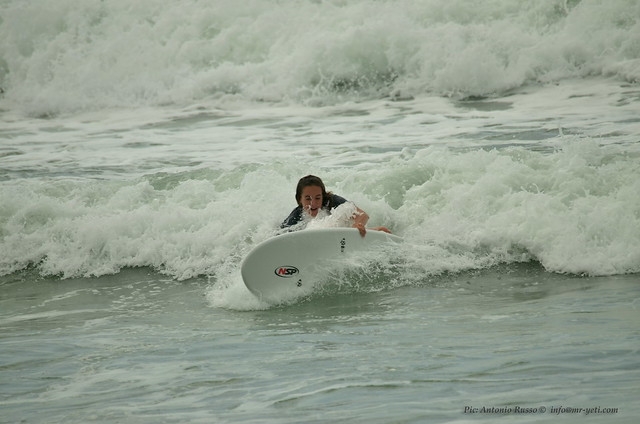 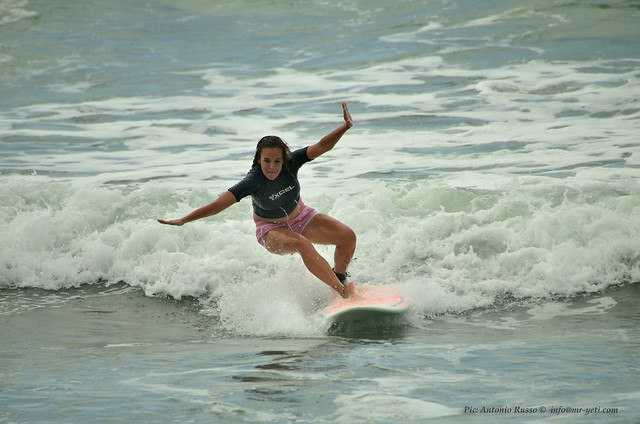 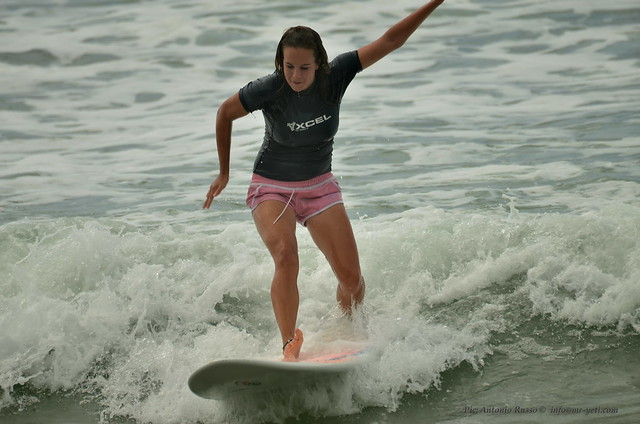 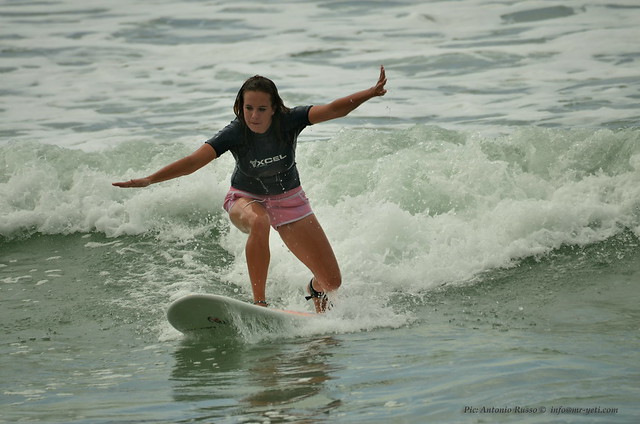 Even though Dan has surfed in Bali, Hawaii, Australia, and now Costa Rica, he also benefited greatly from Mark’s instruction. Dan didn’t have a formal lesson, but Mark went out surfing with him on more than one occasion to give him pointers on how he could improve even more. That’s not to say Dan’s perfect though—I was secretly I bit glad when Mr. Yeti snagged this video, too:

I’ve only practiced my surfing skills once more since my lessons. I won’t say I’m good, but I haven’t forgotten everything quite yet. Dan is already counting down the days until we go to Mexico so he can surf every morning. You never know—perhaps I’ll find myself out there too.

A huge thanks to Mark from Lucero Surf Retreats for such a fun time out in the water. An additional thank you to Mr. Yeti the Photographer for capturing a few of the great (and not so great) moments along the way.

On Monday we’ll be talking all about the yoga, so stop back for our last bit of Santa Teresa goodness!

Do you surf? Would you want to try? Where is your favorite place around the world to surf?

We were guests of Lucero – all thoughts and opinions remain our own.