“You’ll love Isla Holbox. It’s this small island of only 2,000 people. Transportation is primarily via golf cart or bicycle on streets that are made of packed sand. There’s a laid-back vibe, surprisingly good Wi-Fi, and not too many tourists. Seriously, you have to go.”

These were the words of wisdom bestowed upon us from a friend in San Pancho when we shared that we would be heading to Mexico’s Caribbean. As we’ve recently developed a bit of a hankering for golf cart transportation, it sounded like our kind of place.

But as we were bouncing along the unpaved, pot-holed road that would eventually arrive at the ferry terminal, we began to second-guess our travel plans. I mean, we already had plenty of stunning beaches and ocean views to chose from in and around Cancun and the Riviera Maya.

Would the two and a half hour trek to Isla Holbox really be worth it?

The answer is absolutely.

Isla Holbox is pure bliss. And it only took us a about a millisecond to see why. 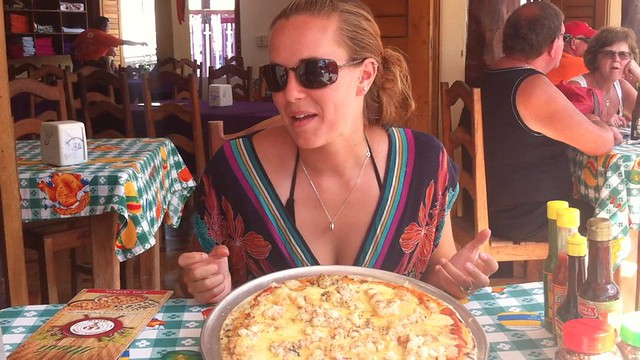 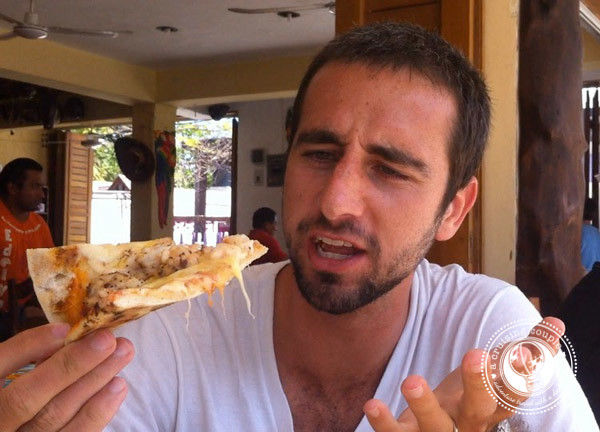 Lobster Pizza is a specialty of Isla Holbox; any local on the Yucatan Peninsula will tell you it’s the one thing you must try when visiting the island. Walking along the small downtown area, we found numerous restaurants advertising a slice of the famed pie. However, it’s said that Edelyn Pizzeria and Restaurante is where you’ll find the original.

I don’t know if it’s the best lobster pizza in the world, but it was certainly pretty damn good. The lobster chunks are large, the crust thin, and the cheese plentiful. The buttery taste of the seafood combined with the salty, melted cheese is nothing less than fantastic. It’s quite a rich dish though, and for this reason we struggled to finish one medium pizza between the two of us.

One local told us that there used to be so many lobsters on the island that you would have to avoid stepping on them when you walked down the street. We doubt there’s any correlation between that and the lobster pizza, but you never know…

Isla Holbox is perhaps best known for the whale sharks that congregate around the island between June and September; during this time a snorkeling encounter with the world’s biggest fish is almost guaranteed.

Swimming with whale sharks is on the top of our never-ending bucket list. But unfortunately our visit to Isla Holbox was in February—completely outside the whale shark timeframe. (Also outside the primary flamingo, dolphin, manatee, and turtle time.) However, we were still able to participate in a beautiful island tour with V.I.P Holbox. Our half-day tour took us to three different islands with great bird watching opportunities and unique flora and fauna. We also went for a dip in the Yalahau Cenote, referred to by the Mayans as the ‘Sacred Fountain of Youth’. It might not be the same as swimming with whale sharks, but it was still an enjoyable way to spend the morning on the water. V.I.P. Holbox was professional and kept the group small, which we really appreciated. They run a large, colorful office in central Holbox where you can also book whale shark tours and fishing excursions. 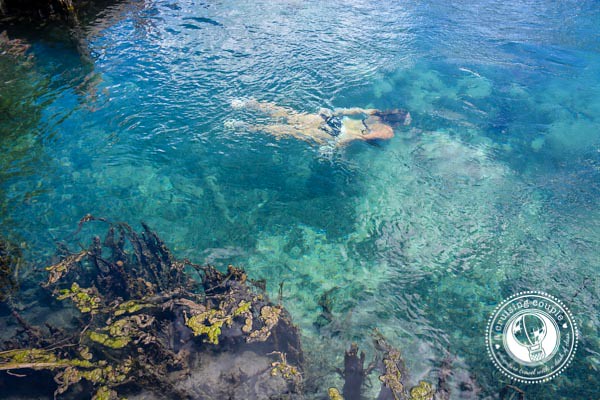 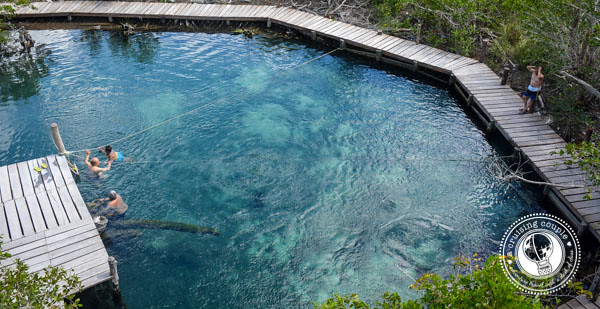 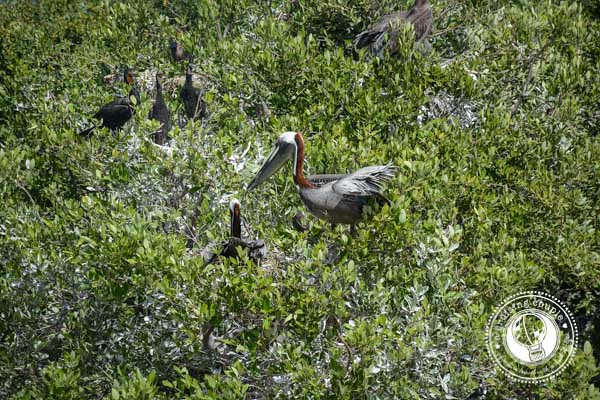 We will definitely be returning to Isla Holbox to swim with whale sharks. We don’t know when, but it’s happening. 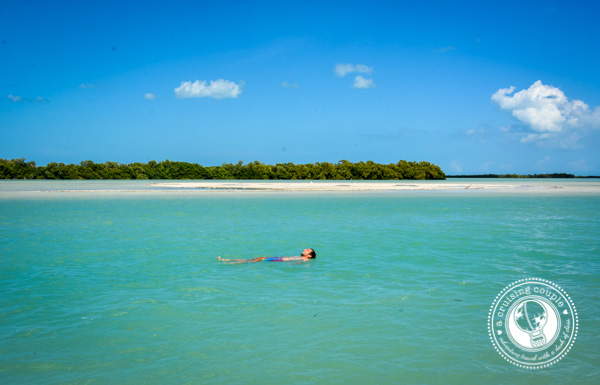 Though Isla Holbox is really just a few hours from Cancun, it feels worlds away. Long sandbars stretch out in the ocean, providing an ideal place to go for a sandy stroll. At night, the sky glitters with hundreds of stars that stretch out continually from all sides. The ocean is calm and inviting, begging those who pass by to go for a dip. It’s completely acceptable to walk around town barefoot. And because the only vehicles on the island are there to deliver goods, there is not nearly as much noise pollution as just about everywhere else in Mexico. 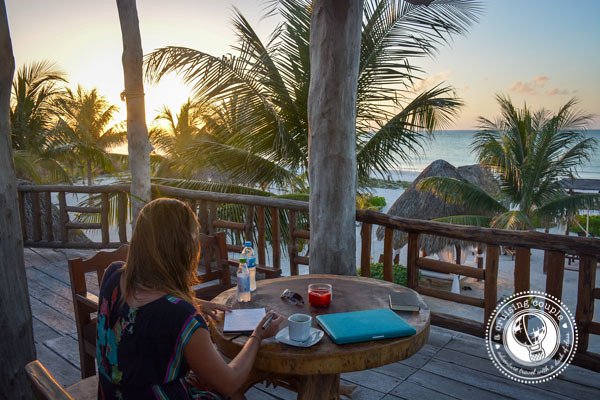 Isla Holbox is where you go if you want to get away from it all.

4.    The Bungalows at Palapas del Sol 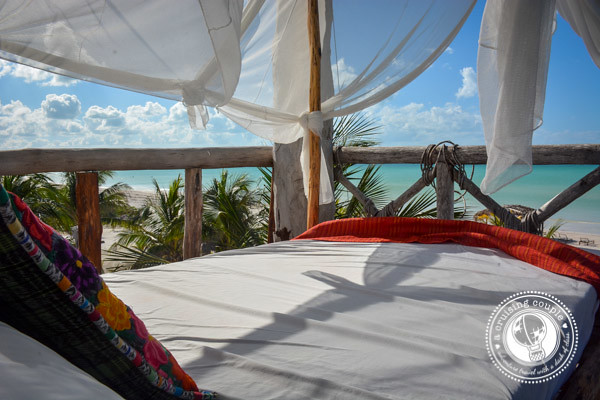 Circumnavigating the island you’ll pass numerous small hotels and beach bungalows. However, none will catch your eye like the stylish Palapas del Sol. This hotelito only has 7 bungalows, promising visitors a personal and intimate experience. We stayed in the beach bungalow with the ‘tower’—a four-story add-on that is likely the tallest structure on the island. We could easily see the other side of Isla Holbox from the top level, though with the gusts of wind we quite preferred to enjoy the view from a bit lower. Our bungalow also had a private outdoor sitting area. This was our favorite spot to enjoy a book on the hammock or utilize the handcrafted wooden furniture as an office. One of the first things we look for in accommodation is a good view; Palapas del Sol certainly fit the bill.

The rooms are tropical bungalows, consisting of handmade stucco walls, native wooden structures and traditional palm thatched roofs. During the daytime the natural light illuminates the décor, while at night the low lighting provides the perfect ambience to enjoy the moon and stars. Though the bungalows boast an authentic and natural feel, they still have all the amenities like air-conditioning, private bathroom, private terrace, and WiFi access. 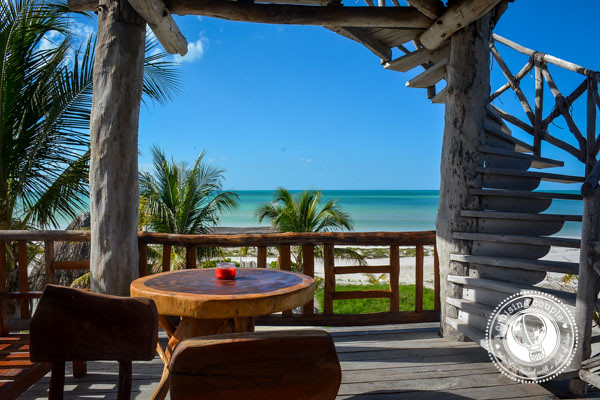 One of our favorite parts about Palapas del Sol is the beautiful and clean strip of beach it sits upon. The hotelito has utilized its space to provide plentiful lounging areas without overcrowding the sand, unlike some of the neighboring bungalows that looked a bit cluttered.

And of course we have to mention breakfast. It is a delectable array of both Mexican and Western specialties, cooked to order from the gracious Mayan hosts. We recommend the Mexican omelet. It was very likely one of the best breakfasts we had during our entire two months in Mexico. 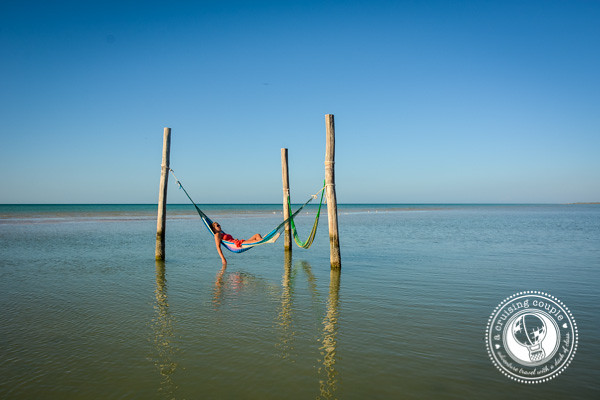 Need we say more? These hammocks were ingeniously placed in the shallow ocean water. They’re open to the public and located just a few meters down from Palapas del Sol. Seriously, lounging doesn’t get better than this.

Have you been to Isla Holbox? Which reason to visit sounds the most enticing?

A massive thank you to the Cancun Tourism Board for hosting our visit to Isla Holbox. As always, all thoughts and opinions are our own.

A Glimpse of Isla Mujeres

Finding Art and History in Cancun

Reflections on 6 Weeks in San Pancho

Adventures in the Yucatan | A Video Journey Into Cenotes

Rhythms of the Night |An Unforgettable Encounter With Ancient Civilization

How To Travel Mexico in Style – The Vocho

A Preview of Life in San Pancho, Mexico