Yoga Teacher Training | An Adventure Outside the Studio

After I shared my yoga teacher training schedule last week, I received quite a few emails talking about what an intense schedule we have. I’m not going to lie—things are pretty busy here. After all, we only have thirty days to get up to speed on a tradition that dates back thousands of years… But just because we’re working hard in the yoga studio doesn’t mean we don’t have time for a bit of adventure, too!

Since dinner on our first night at Blue Osa, Aaron had been hinting that he had a few surprises up his sleeve for teacher training this year. Last week, the first one was revealed: we were going on a ‘field trip’. Where to he wouldn’t say, only that we were still required to wake up at 4:30, drink hot water, do our Neti pot and then be ready to leave by 5:00 on the dot. It’s been a while since any of us went on a field trip, so we couldn’t help but feel excited as we piled into a few trucks and set off down the gravel road. Of course we happened to land ourselves in the back of a rustic pick-up—a decision that would later come back to be somewhat amusing…

Off The Beaten Track On The Osa Peninsula 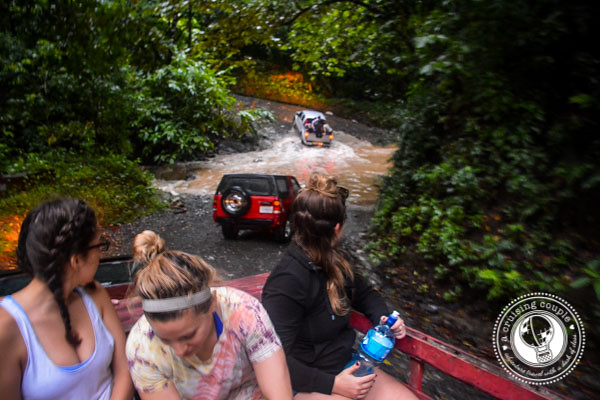 We bounced along for thirty minutes past wild jungle and through a few low rivers, the obligatory howler monkeys calling out in the distance. The muddy roads were a testament to the torrential downpours we had received the night before, and on more than one occasion I simply had to squeal as we slid around on the hills. All twenty-something of us eventually made it to our secret destination; I actually let out an audible sigh of relief when our feet were firmly planted on the ground once more. Dan likes to kid that I am slowly becoming more of a ‘classy travel with a dash of adventure’ kind of gal, and on days like that, I think I believe him.

But it was clear the moment we arrived that the destination was well worth the journey. For lack of a better word, we had arrived at a sort of large wooden teepee. The platform looked out to a wide grassy field that was lined by trees to form a perfectly natural V shape. At the point of the V was the ocean, extending as far out as the eye could see. It was simply stunning, a magical place to practice for the morning while meditating on the idea: My mind is empty, my body is as vast as the sky. 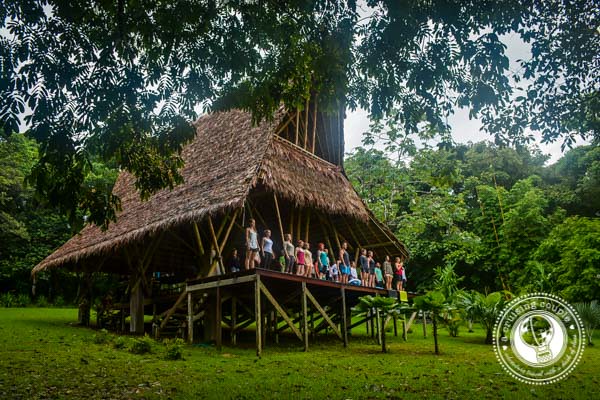 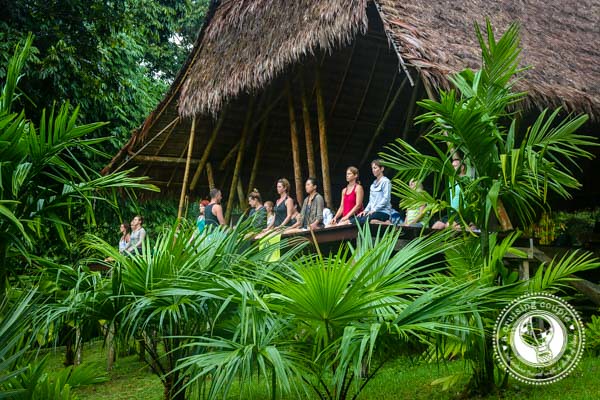 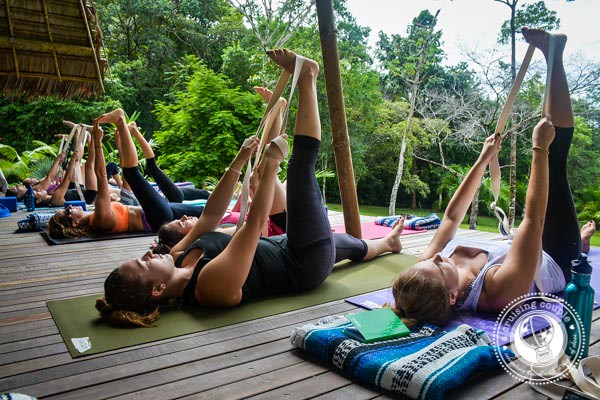 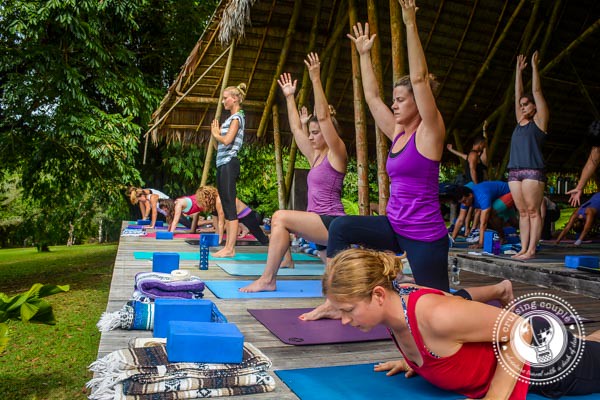 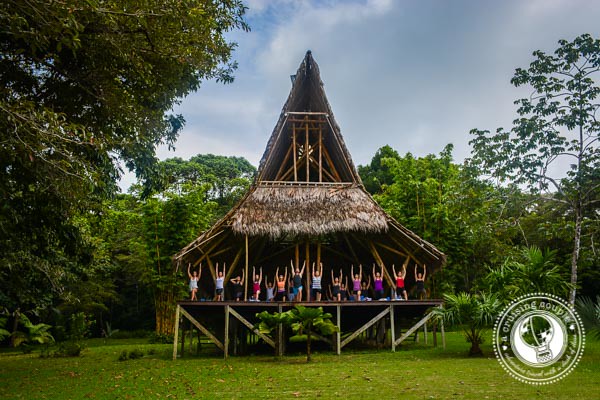 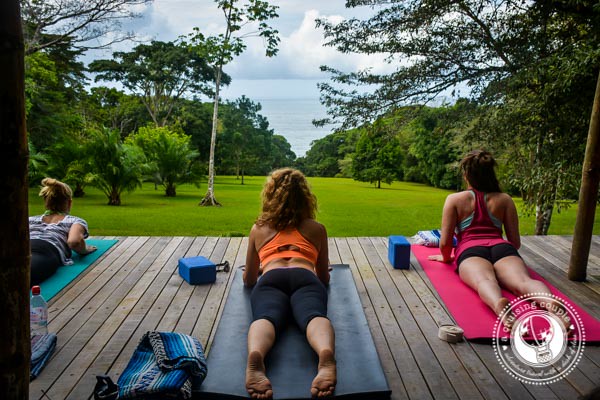 After a few hours of practice, the real adventure began. On the afternoon agenda was a hike to the beach and a nearby waterfall. It should have been a relatively easy hike, except for the fact that it was through the jungle, down a slippery slope of squishy mud, made all the worse from the previous night’s rain. It took about five minutes for a group of us to realize it was easier to keep traction by walking barefoot—a decision I came to regret when it was time to wade through rough, stone laden rivers. 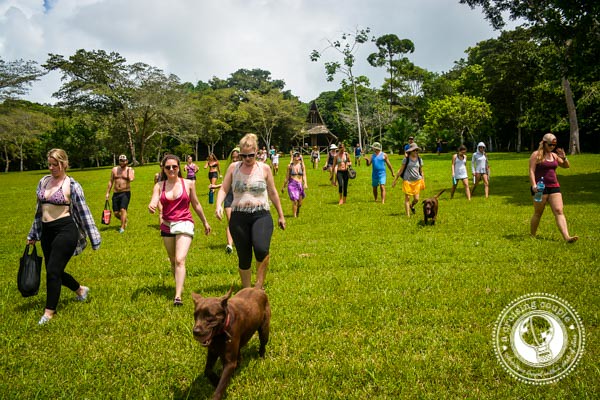 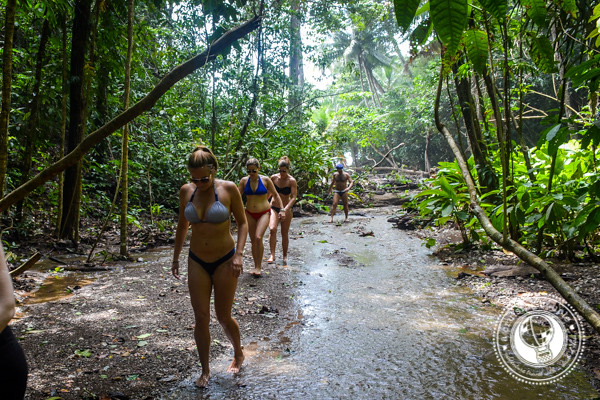 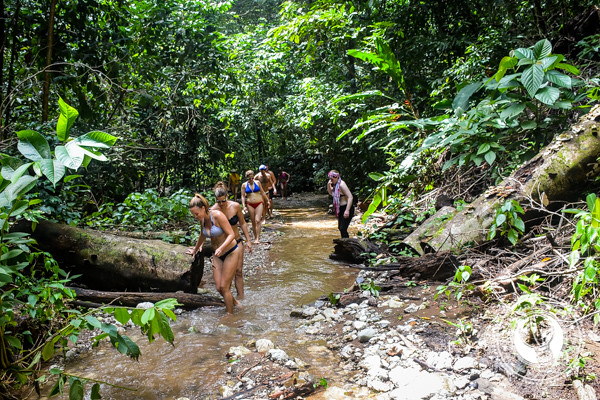 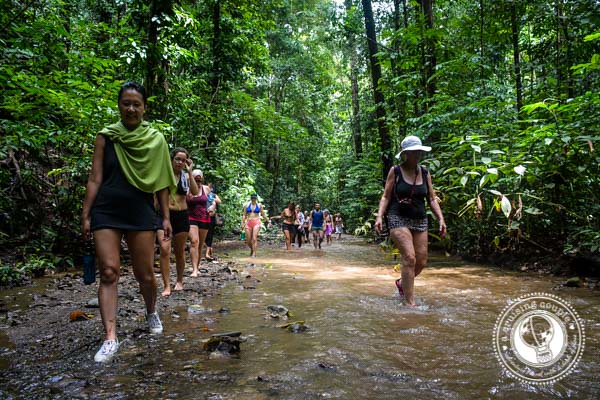 Miraculously we all made it to the bottom safe and sound, where a secluded, palm-fringed beach awaited. We ran into the ocean at full speed, gratefully trading in the sticky jungle humidity for the cool ocean waves. In between swimming sessions we hiked to a secluded waterfall, watched monkeys play in the trees and soaked in the sunshine. 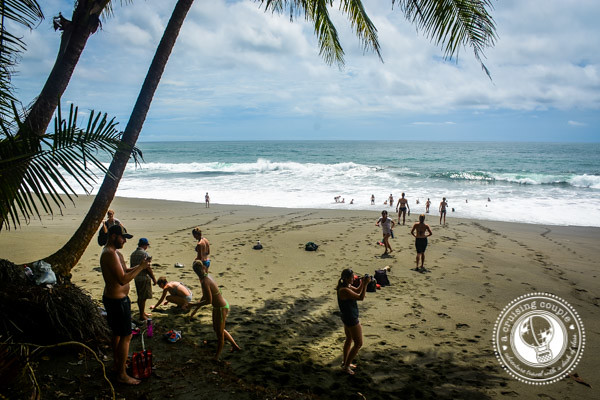 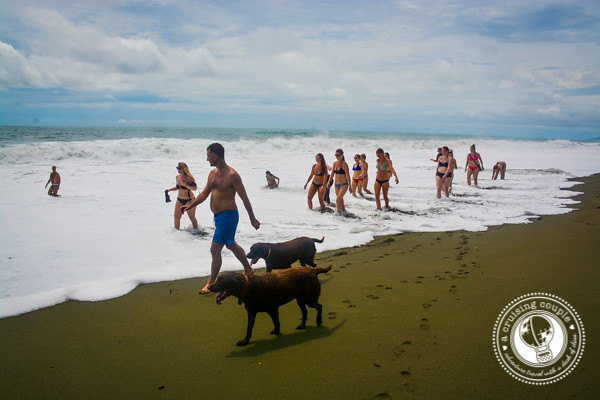 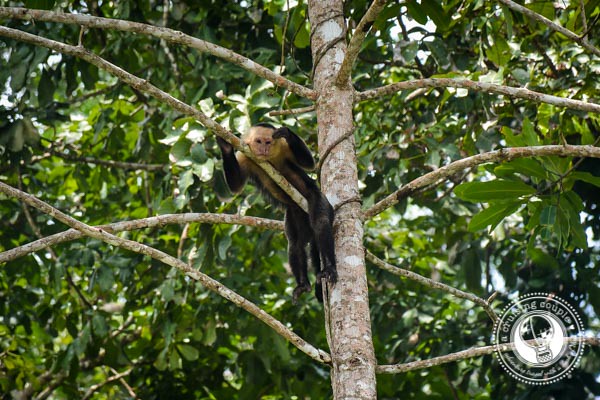 It was a lovely afternoon with even lovelier people, and a great way to get to know each other outside of Blue Osa. But though we thought our day was coming to a close, we soon found out that the shenanigans were only just beginning. 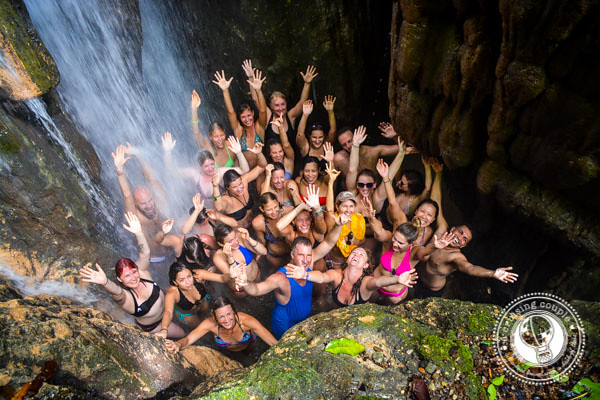 I mentioned the rustic pick-up truck, the steep hills and the muddy road conditions earlier. So it probably comes as little surprise when I say that though we had no trouble getting down the hill, we had a lot of trouble coming back up. We had so much trouble that all eight of us had to get out of the truck and attempt to push it up the hill as it sputtered mud back at us. It was absolutely hilarious, primarily because we knew we weren’t actually stuck in the middle of the Costa Rican jungle—even if that’s definitely what it seemed like. After about thirty minutes of pushing and getting nowhere, we decided to make the short—but steep—hike up the top of the mountain, our yoga mats, blocks and blankets slung over our back. We eventually made it up to the main road, covered in sweat once more, but welcomed by the cheering and clapping of our fellow yoga teacher trainees who had waited for us at the top. 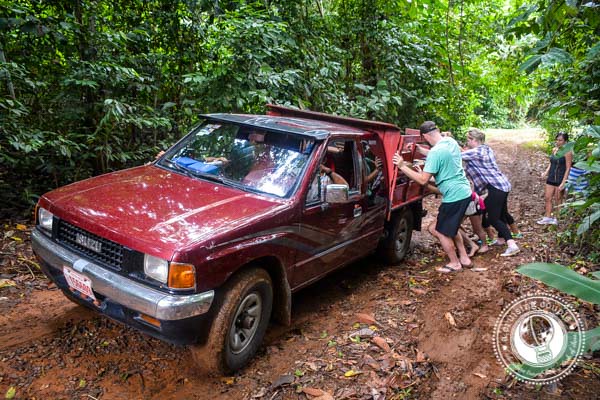 We still had the predicament of how to get 24 yogis back to Blue Osa in only three vehicles. Luckily that problem was quickly solved though when we saw a truck drive by, complete with makeshift seating in the bed of the truck…and towing a broken down car behind it. The local Ticos seemed slightly amused by our large group of gringos on the side of the road, and kindly allowed eight of us to squeeze in. So we set off once more, along the bumpy road, through the rivers, and past the countryside. We only stalled once before miraculously arriving at the gates of Blue Osa, which always seem to be such a welcome relief for us on our travels. 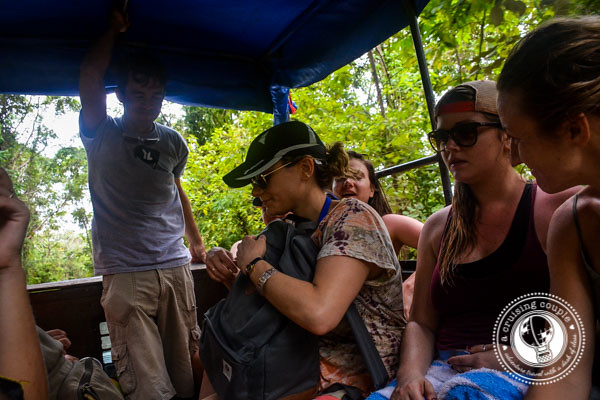 Our yoga-waterfall-trekking-hitchhiking adventure was just the first surprise during yoga teacher training at Blue Osa. The second surprise was revealed a few days ago. Stay tuned, because we’ll be sharing it here next week!

Have you ever had to hitchhike in a foreign country? Would you trek barefoot through the jungle in Costa Rica?