I’m not sure I’ve ever had a panic attack before. There was one time I got lost on a mountain in Ecuador (a story anyone who knows me has long grown tired of hearing). I think I came pretty close to a panic attack then. I’m certain I came even closer one day while cycling Vietnam.

We had just finished a tour of My Son. To continue on our cycling journey, we had two options: return the way we came and then head south (adding an extra 30 km) or take a shortcut. I know. You’re thinking shortcuts are always a bad idea. And now we know you’re right.  But Google Maps said we would only have 5 km of dirt and mud before a highway greeted us, and that sounded like a pretty good deal. Plus, I hate backtracking like nothing else. We thought it over for about .5 seconds then took a left. Shortcut it was. Little did we know this highway Google Maps promised was nothing more than a gravel path. Only, it wasn’t gravel in the traditional sense, because the rocks that constituted the road were larger than my fist, muddled with potholes great enough to swallow a cow. Of course, this whole debacle was uphill, through the most remote route we’d been on so far—no people, no towns, lots of construction facilities. 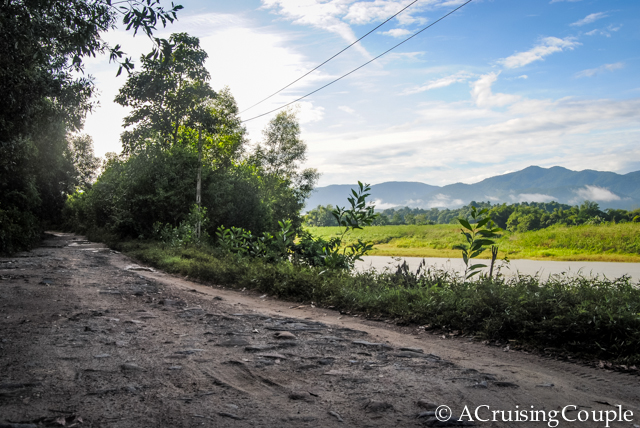 It was somewhere while pushing our bikes up the rocks (we had long deemed cycling it impossible) that the first bit of nerves crept in. With two hours of daylight left, I brushed them aside, convincing myself we had plenty of time to find something…right?

As if on cue, just when we were exhausted and questioning how much farther we could press on, the entire sky above us turned black. Our few remaining moments of sunlight were instantly snatched from us. The wind blew harder, the air got cooler. Before we had time to sense its coming, a storm was upon us.

We knew we were in trouble the moment the cows began frantically running past, seeking shelter from the fury that was about to be unleashed.

We were officially stuck in the middle of who-knows-where Vietnam, unable to cycle due to the hazardous road conditions, uncertain as to how far a hotel or even town would be, and accompanied by the largest storm clouds we’d seen yet. Mr. Panic attack was determined to overpower me.

In the midst of the tears and fear creeping in, a miracle intervened. We suddenly came across a small strip of five humble homes, the first ones we had seen the entire afternoon. With no other choice, we picked one at random, knocked on the door and inquired how far to the nearest hotel. A young girl with her mother and father huddled in the doorframe. Though they knew no English and we no Vietnamese, they quickly understood the situation and our need for shelter. They looked at us questioningly, looked harder up at the sky, looked back at us once more, and then shyly motioned us inside their own home.

No longer than a moment after we pulled our bikes under their porch did God open up the sky. The thunder was deafening and the lightning furious as the pounding rain made any vision past a few feet impossible. We had never been so grateful for a roof over our heads.

The family who took us in was reserved.  Typically Vietnamese have little concern for personal space; we have become accustomed to being petted and poked, our bikes examined, our possessions fondled. This family was different. They had a gentle demeanor. I couldn’t determine if it was of embarrassment or suspicion; regardless, their kindness was quickly made evident. The father insisted we take one of their two beds, making ourselves at home on the bamboo structure. The mother cooked dinner over a wood fire out back, serving eggs and rice and apologizing all the while for the lack of meat. While their means were few, they insisted on refilling our bowls again and again until we truly could no longer manage another bite.

The shower was a bucket of rainwater behind a tarp and adjacent to their three pigs. When I asked for the toilet I was told it must wait until after the storm—the village’s communal restroom was a long walk away. After dinner we all congregated in the house’s main room to watch TV; it was clear this simple piece of technology was the most prized and valued possession in the home. It was here that I noticed the father had a false leg. It’s a minor detail and not of importance, but after visiting the Mine Action Visitor Center, I couldn’t help but wonder if it was the result of a landmine. And if this was so, his graciousness to welcome two Americans into his home seemed all the more generous. 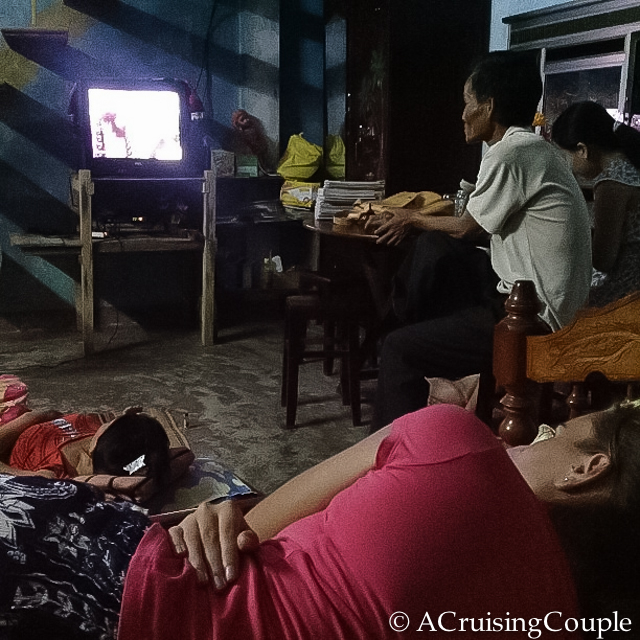 We couldn’t learn much more about the amazing host family that had accommodated us. The daughter’s English books were our only translation devices. However, it didn’t take language to understand the kindness of this small family. They took us in, cared for us, fed us, helped us on our way, and didn’t request anything from us in return. Many travelers in Vietnam tell tales of being taken advantage of by all the locals, ripped off and overcharged, only viewed as a dollar sign. It breaks my heart to hear these stories, and to know they were unable to experience the same side of the Vietnamese people we did—to feel the overflowing kindness we were blanketed with.

The next morning was bright and beautiful, the kind of sky only made possible after a storm has come through. It took us over an hour before we spotted a hotel—God only knows how long that would have taken the night before, what electronics would have been damaged along the way, what other dangers we might have faced.

The experience really got us thinking. If two foreigners who didn’t speak our language came to our own door, would we let them in? If we had nothing to offer, barely enough food to feed ourselves, would we so graciously share with these strangers? It sounds in part like morals from biblical times, and similar variations of the same story have been told again and again. All the same, I can only hope we would be so kind should the reverse situation ever occur.

What would you do if we were the strangers who knocked on your door? What’s the most terrifying situation you’ve encountered while traveling? Let’s hear your stories in the comments below!