How To Get A Sak Yant Tattoo In Thailand: Everything You Need To Know

We’ve known for years that if we ever traveled to Thailand, we would get traditional Sak Yant tattoos. I’m not sure how we first heard about these traditional Thai tattoos, but we were immediately intrigued. This was before we knew Angelina Jolie has one and before Sak Yant tattoos became a bit of a fad (especially with travel bloggers.) I actually think most people thought we were crazy when we used to explain why we would want a Buddhist monk to hammer repeatedly into our skin with a bamboo rod…

So when we finally embarked on our first trip to Thailand this year, getting an appointment for a Sak Yant tattoo was the very first thing to go on our travel itinerary. 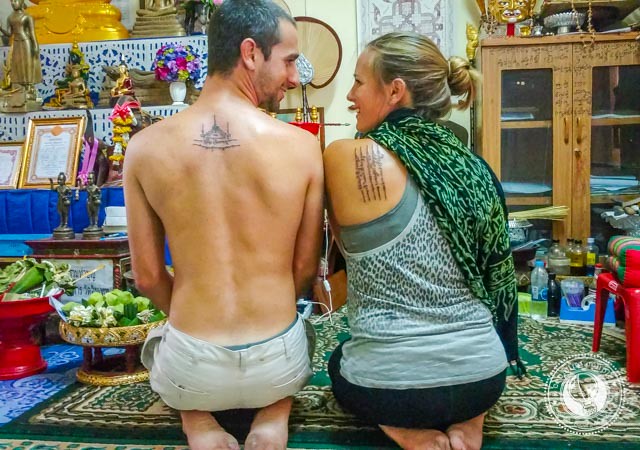 What Is A Sak Yant Tattoo?

You’re not alone if you’ve never heard of a Sak Yant Tattoo. We’re always explaining to people what we’ve got inked on our backs, and we love sharing about the sacred experience!

Sak translates to ‘jab’ and Yant to ‘blessed tattoo.’

Traditional Sak Yant Tattoos are ancient Buddhist designs and prayers that are etched into the skin by an expert monk using a long bamboo rod (now with a steel needle tip.) They date back thousands of years and are believed to offer various protections and blessings, depending on the design. 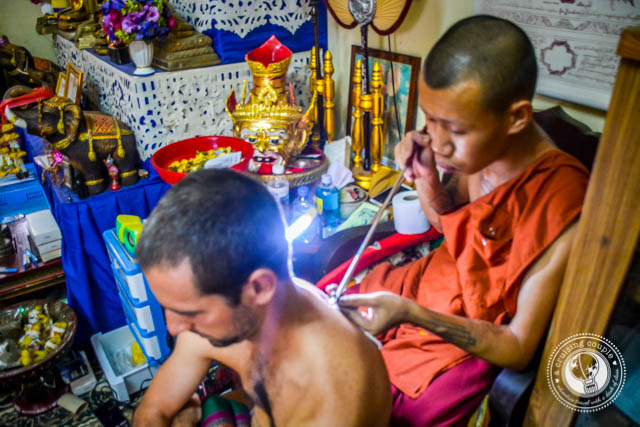 The Sak Yant Tattoos are typically performed by monks within a Thai temple. These are by donation, but it can be difficult to find monks willing to tattoo women as they aren’t supposed to touch the opposite sex. Alternatively, Thai bamboo tattoos can also be given by an Arjan, or an ex-monk who is a Sak Yant Master. These will have a fixed fee and can also be performed with a tattoo gun. Typically it’s easier to find an Arjan willing to tattoo women. 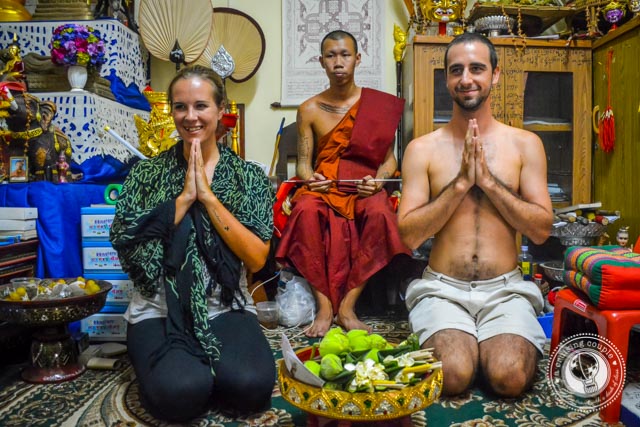 We did a ton of research. After all, this was something we had wanted for years! There were a few things that were super important to us:

1. That the experience was authentic. There are tons of touristy tattoo parlors that can do Thai designs, but for us, that defeated the entire purpose.

2. That the experience was intimate. We didn’t want to wait in line for hours and then have to rush through the ceremony so the people behind us could get their turn.

3. That the experience was traditional. A typical bamboo rod, with a monk, in a temple, etc.

4. That the experience was sanitary. Obviously, we didn’t want to come home from Thailand with an unwanted souvenir from dirty needles.

Ultimately we decided to go through Chiang Mai Locals to get our Thai tattoos. Chiang Mai Locals was able to make an appointment for us with a monk at a small rural temple just outside of Chiang Mai—and it was at a location where they knew the quality (and sanitation) of the tattoos. This took all the worry out for us!

Nana was our fantastic host from Chiang Mai Locals. She met us at our hotel, accompanied us to the temple, translated the entire process, walked us through proper etiquette, and ultimately made sure that our experience getting a Sak Yant tattoo was even better than we could have hoped!

As briefly mentioned above, it’s not easy to find a monk willing to do the Sak Yant tattoos on a woman. In our case, it was not a problem as long as I was accompanied by a man also getting a Sak Yant tattoo and I didn’t take any photos during the tattoo process.

When we arrived at the temple, the first step was to look through the books of designs and choose the pattern we wanted.

We had heard that in some cases the monk would not allow you to choose the tattoo; rather, they read your aura and give the blessing they deem right for you. However, our monk believes if you see a Sak Yant design that you want, then it means that pattern is speaking to your soul, and therefore it’s the right blessing for you.

I knew that I wanted the Hah Taew Yant, or 5 sacred lines. This is easily the most popular Sak Yant tattoo (and it’s the one Jolie rocks.) Each line represents a Yant, or magical blessing. You can learn all about what each line means here, along with the rules that accompany the tattoo.

We don’t know the name for Dan’s tattoo. He told our monk from what he wanted protection, and then received a few suggestions on what magical blessing would be the best fit. 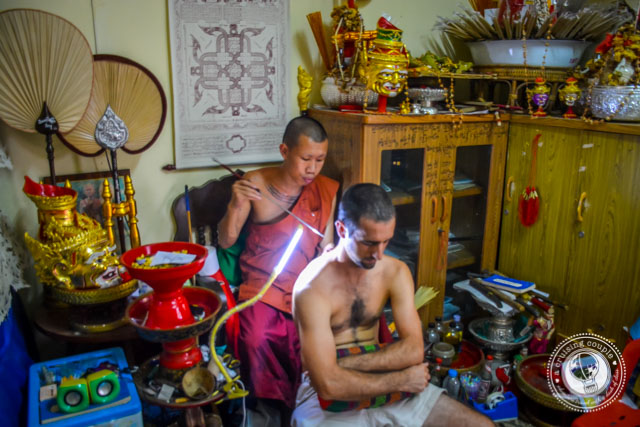 Oh yes. The bamboo needle definitely hurts more than a traditional tattoo gun. However, it’s pretty fast (mine took an hour), and it heals extremely quickly. We had no blood, no scabbing or peeling, etc. The quality is supposed to last for a long time, so that’s also good. Though we were told the magic in the ink needs to be replenished each year—a good reason to get us back to Thailand! 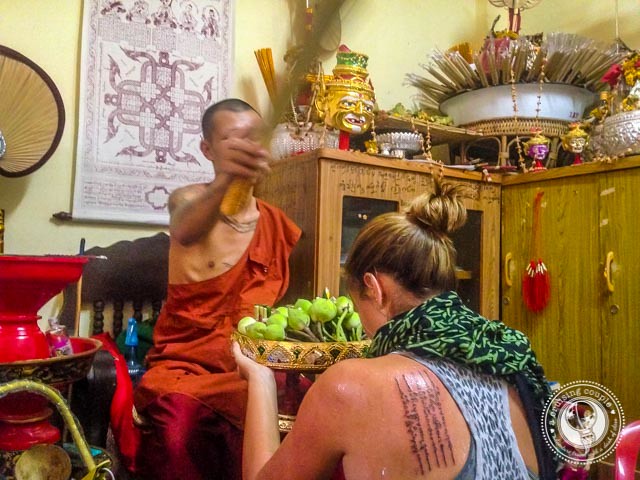 After the monk had finished the tattooing, there was a short ceremony to bless the tattoos. This included chanting and gently hitting the tattoo again and again. We then offered a donation to the monk for his time and magic.

Whether or not you believe in the magic of the tattoos, the experience of receiving a traditional Thai tattoo from a monk in a small rural temple is one that will stay with you forever—both physically and mentally.

1. Dress respectfully. Women should wear pants and cover their shoulders.
2. Do not point your feet towards a monk or stand above a monk as both are deemed disrespectful.
3. There is no fee for a Sak Yant tattoo from a monk in a temple. However, do bring a donation. This is usually flowers, incense, candles and a small monetary gift.

While it’s very safe and hygienic, you should always keep an eye out for infection and your health in general, especially traveling overseas, CPOE.org has some great info to do some self-diagnosing while you travel.

If you’re interested in getting a Sak Yant tattoo, we highly recommend going through a local who can guide you through the process and ensure that the monk or Arjan you choose is authentic and safe. Chiang Mai Locals was wonderful. We’ve also heard great things about Where Sidewalks End.

You can also learn more about Sak Yant Tattoos here.

We are thrilled with our Sak Yant tattoos and extremely grateful for the beautiful experience. It’s not for everyone, but we have no regrets.

Would you get a Sak Yant Tattoo? Do you have one?

P.S. We were not guests or affiliates of Chiang Mai Locals.

Read More About Our 3 Weeks Traveling Around Thailand