Ever wondered what it’s like to spend the night in a stunning treehouse community in one of the most remote regions of Costa Rica?

Then read on—you’re going to love this account from our first (of what would become many) visits to Finca Bellavista! 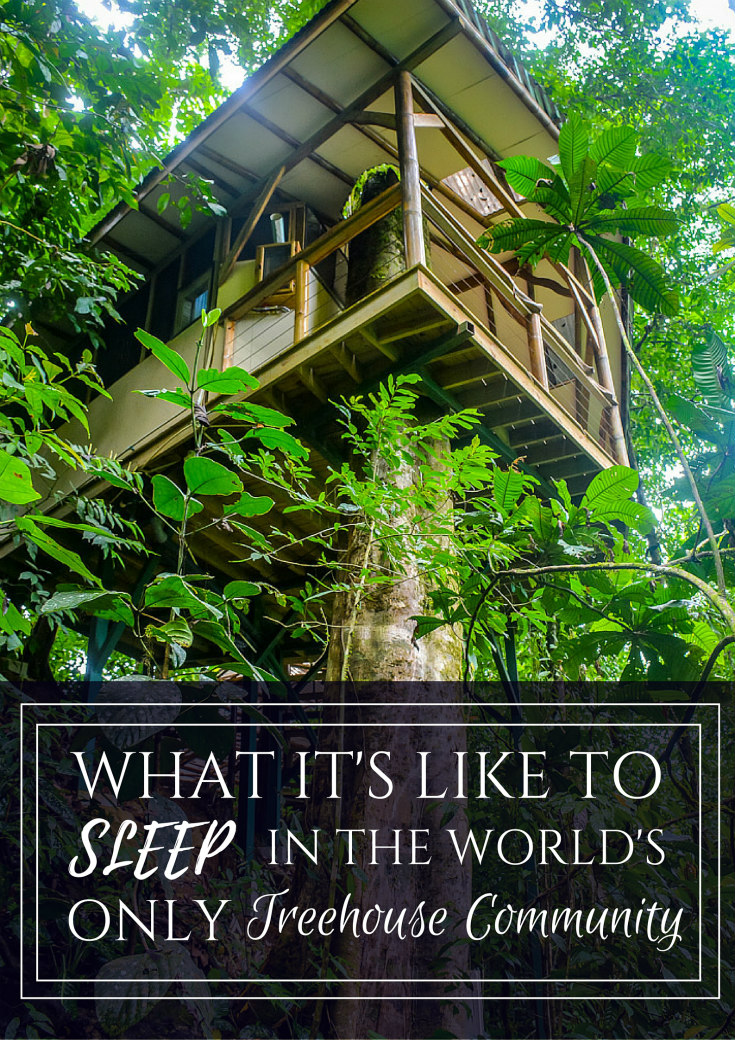 The plan began with Kim, a fellow yoga teacher training participant. She was traveling around Costa Rica with her fiancé, a journey that naturally had to include a pit stop at Blue Osa (the place we had just spent such a transformational month of our lives).

As we were catching up over a few glasses of wine, we began talking about her plans to hop across the Gulf and visit Finca Bellavista, the world’s first planned, modern, sustainable treehouse community—which just so happened to be founded by Erica, another one of our yoga teacher training buddies. Our excitement over a potential Friendsgiving mounted. I wasted no time in sending Erica an email in the hopes that Finca Bellavista could set out a couple of extra plates for Thanksgiving Dinner. A few messages later and we were ready to go, along with our two favorite fellow Blue Osa volunteers. Thanksgiving with friends in a Costa Rican treehouse it was! 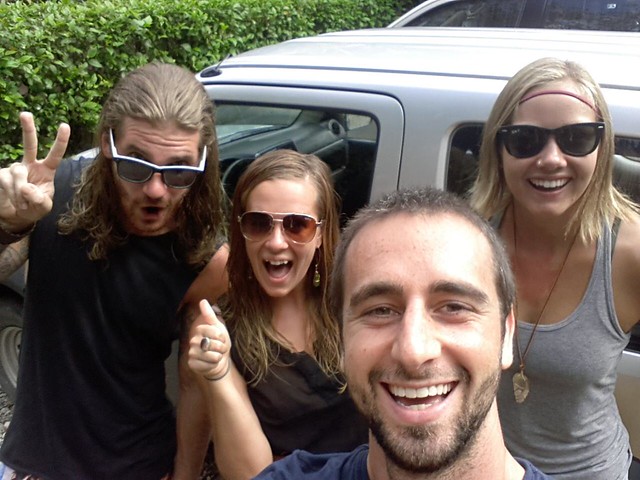 The Journey To Finca Bellavista

Two days later we rented a car and piled in for our mini-adventure a mere two hours away. As we rolled down the windows, played our favorite tunes and cruised past stunning ocean views, it was easy to cultivate an overwhelming sense of gratitude for our many blessings on this unique Thanksgiving Day. We never cease to be amazed at the abounding beauty of Costa Rica, especially when traveling around the Osa Peninsula. This day was no exception. 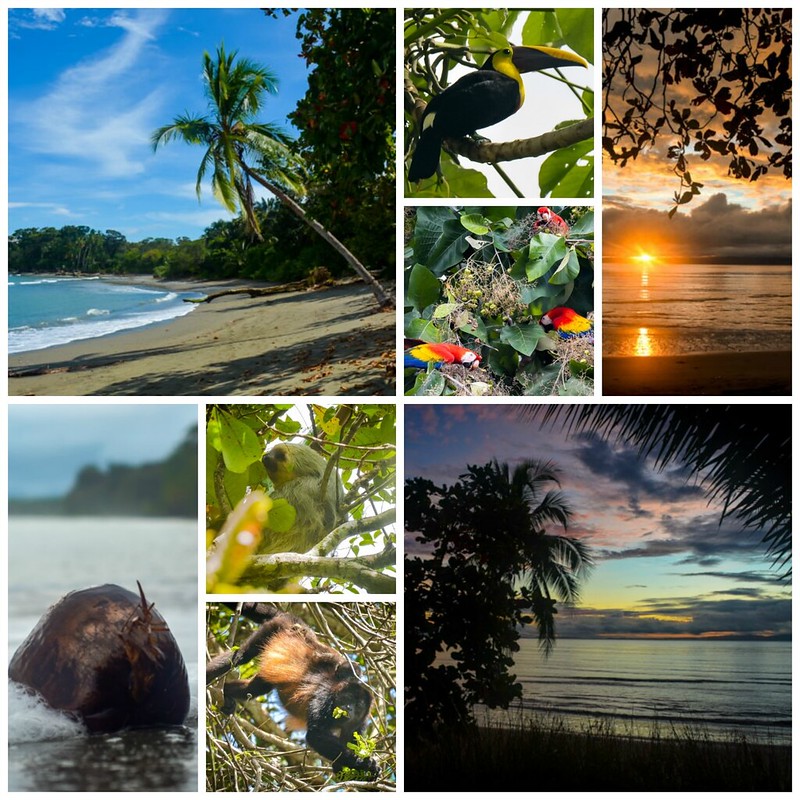 Finca Bellavista isn’t difficult to arrive at, but it’s not easy, either. The closest town has a school, a church, and a gas station…and that’s about it. There are no signs or billboards, only an old logging access road that leads up a steep and rocky hill. You might pass a cowboy or a few children playing in the rain forest, but that’s about it. As if a treehouse community wasn’t unique enough, this extraordinary remoteness made it seem all the more like the hidden gem it is.

The Inspiration For Finca Bellavista

Naturally, Erica talked about her business a bit during yoga teacher training. However, she absolutely did not give herself enough credit for the magical world she created high up in the treetops of Costa Rica. 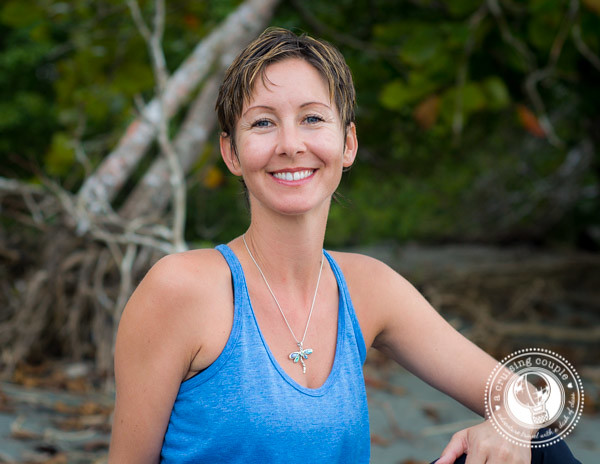 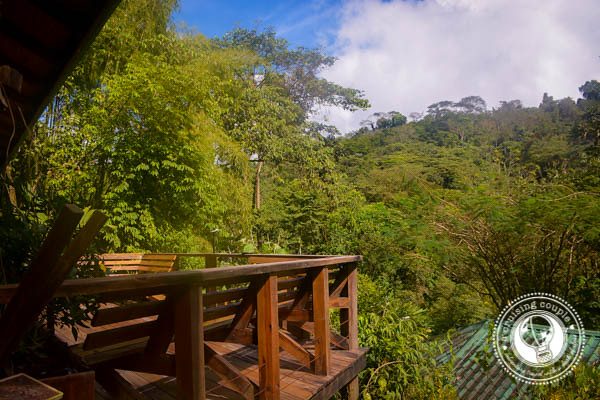 Consisting of over 600 acres of wild rainforest, two whitewater rivers and 25 structures (five of which are true treehouses) Finca Bellavista is the world’s first planned, modern, sustainable treehouse community. Erika admits that they never intended on such a feat. They had fallen in love with Costa Rica and were looking for a piece of property to call their own, likely a small surf shack or beach hut fixer-upper.

But then they stumbled upon the land where Finca Bellavista now lies. It was originally the home for about twenty indigenous families who worked and lived the land. When, unfortunately, their school burned down, they decided to relocate to other towns nearby and sell the property. The unique piece of land was put on the market as a timber harvest site, but Erica and Matteo knew they couldn’t let this paradise be destroyed. One thing led to another, and the idea of a treehouse community was born!

The Treehouses At The Finca

When we first heard the word treehouse, we imagined something similar to what we played on as children: one-room, rickety wooden structures, perhaps with a ‘No Girls’ sign propped out in front. But the structures at Finca Bellavista are works of art, each its own handcrafted masterpiece with indoor plumbing, full kitchens—even hot water! Given the climate of living in a rain forest, what they’ve been able to do in a limited timeframe is extraordinary. It’s basically glamping at its finest in the treetops of Costa Rica. 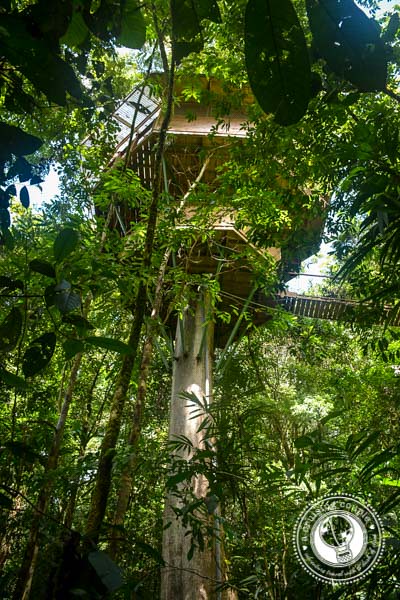 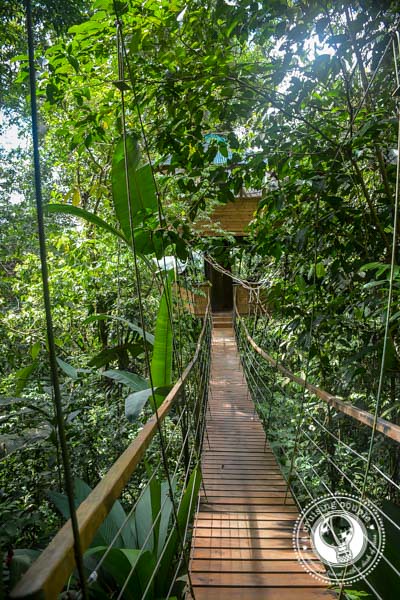 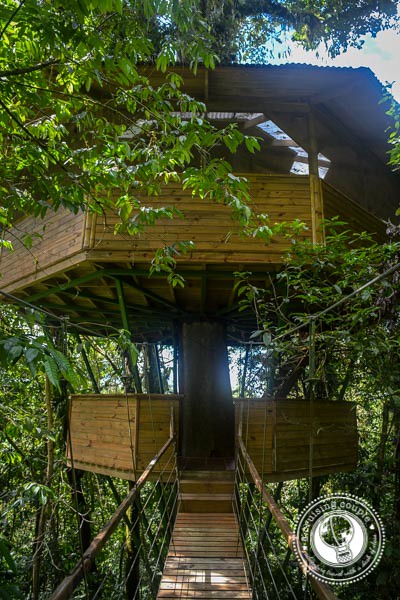 Each treehouse is either supported by stilts or built entirely into the trees. The construction of their treehouses allows the tress to continue growing and thriving, ensuring the long-term sustainability of the project. It also means that the design and construction team has to get creative, often finding ways to incorporate branches in the living areas or suspension bridges from one room to the next. It’s all very Swiss Family Robinson, just a touch more upscale. 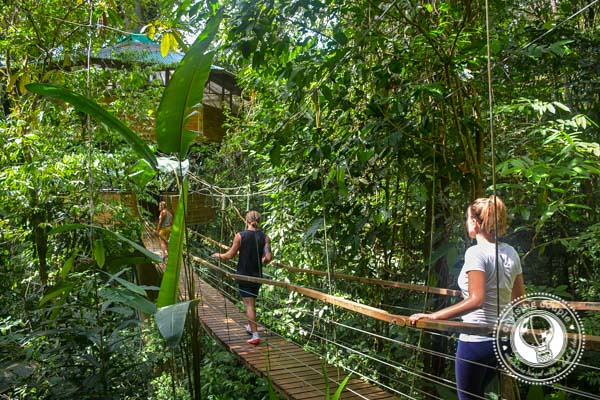 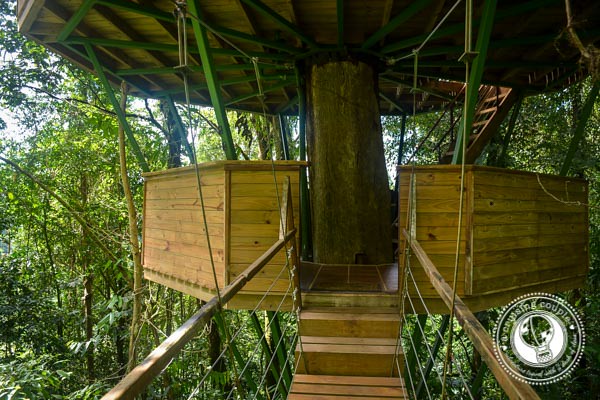 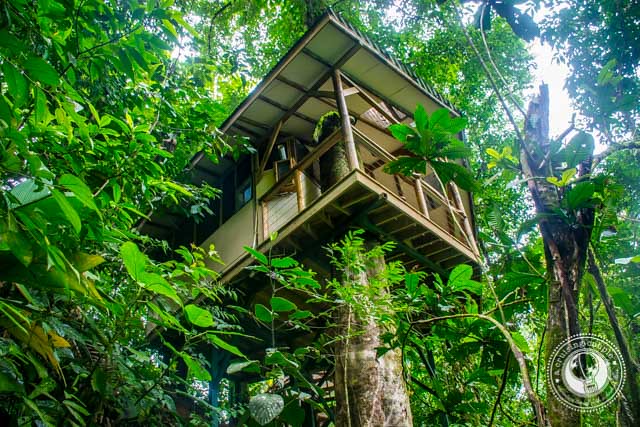 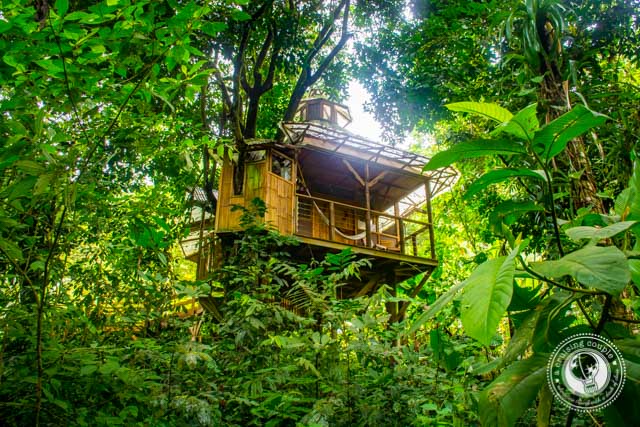 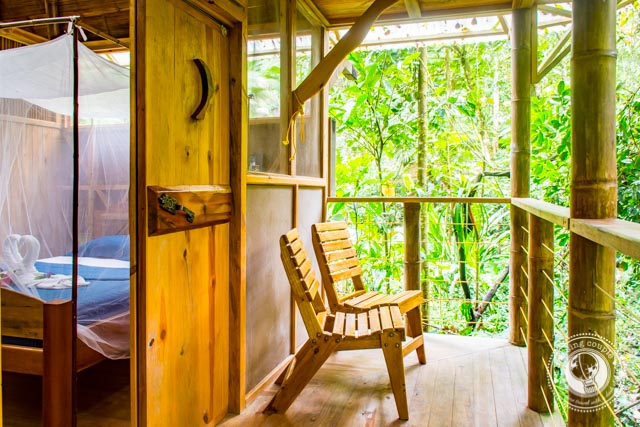 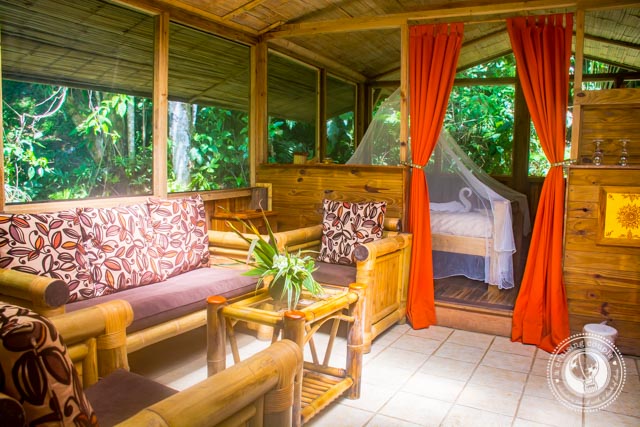 Though Finca Bellavista is a treehouse community, each treehouse is extremely remote and private. Our accommodation was the closest to base camp, yet it was still a 20-minute walk through the jungle and across a suspension bridge to arrive at. But the journey is well worth the reward; each treehouse offers the ultimate in peace and seclusion, quite literally being in the middle of nowhere.

The Adventures To Be Had 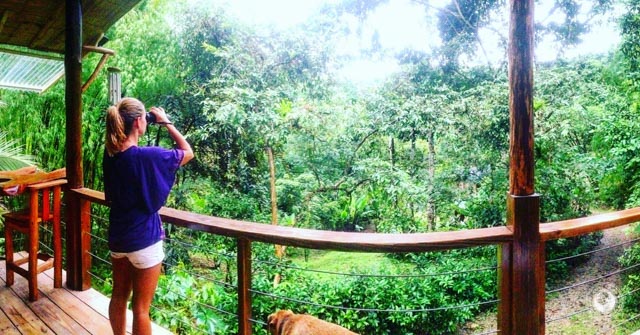 One of our favorite parts of our stay was waking up early to the sounds of the jungle, grabbing a cup of coffee, and relaxing into the day from our high-altitude porch. We were tempted to enjoy the tranquility from here for the entire duration of our stay, but alas, there were too many tantalizing adventures nearby that beckoned for exploration.

Options included morning yoga, canopy ziplining, and hiking. We opted to head to a nearby swimming hole, which included a walk along one of the Finca Bellavista trails to a crystal-clear whitewater river. From here we ditched our boots and our bags and jumped straight into the water where we continued our tread downstream. Twenty minutes of wading through the cool river later and we arrived at our swimming hole, only accessible by jumping in from the rocks up above. From here we swam, laughed, and jumped, playing like children who have just stumbled upon their very own secret hideout in the middle of the Costa Rican rain forest. 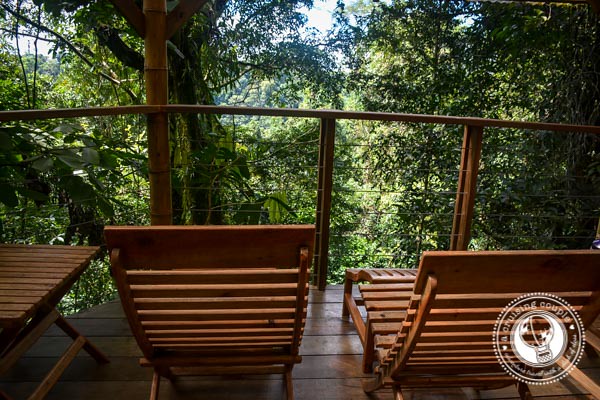 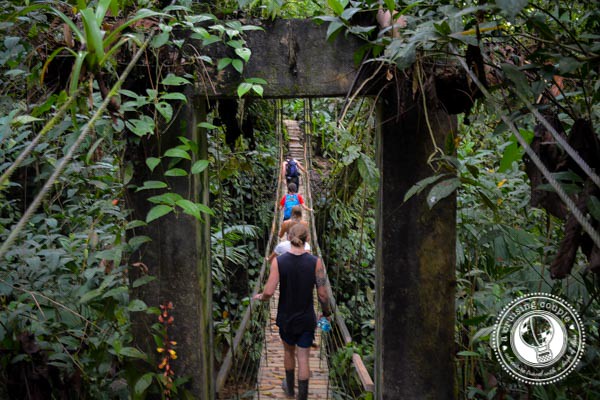 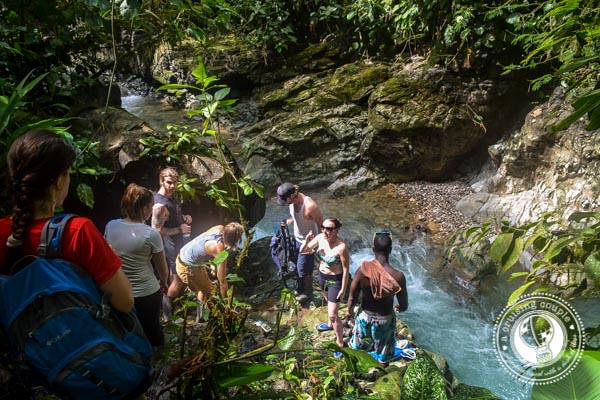 This was our fourth Thanksgiving that we’ve celebrated abroad. And while we’ve had some pretty memorable Turkey Day meals around the world, I think this one tops the cake on them all. Good food, good people, good treehouses and good jungle adventures—what can get better than that?

If you’ve always dreamed of having your own treehouse to escape to, Finca Bellavista sells lots and treehouses in their community. A pretty cool alternative to the standard beach vacation home!

Where is the most unique place you’ve ever slept? Does the idea of a treehouse hideaway intrigue you?