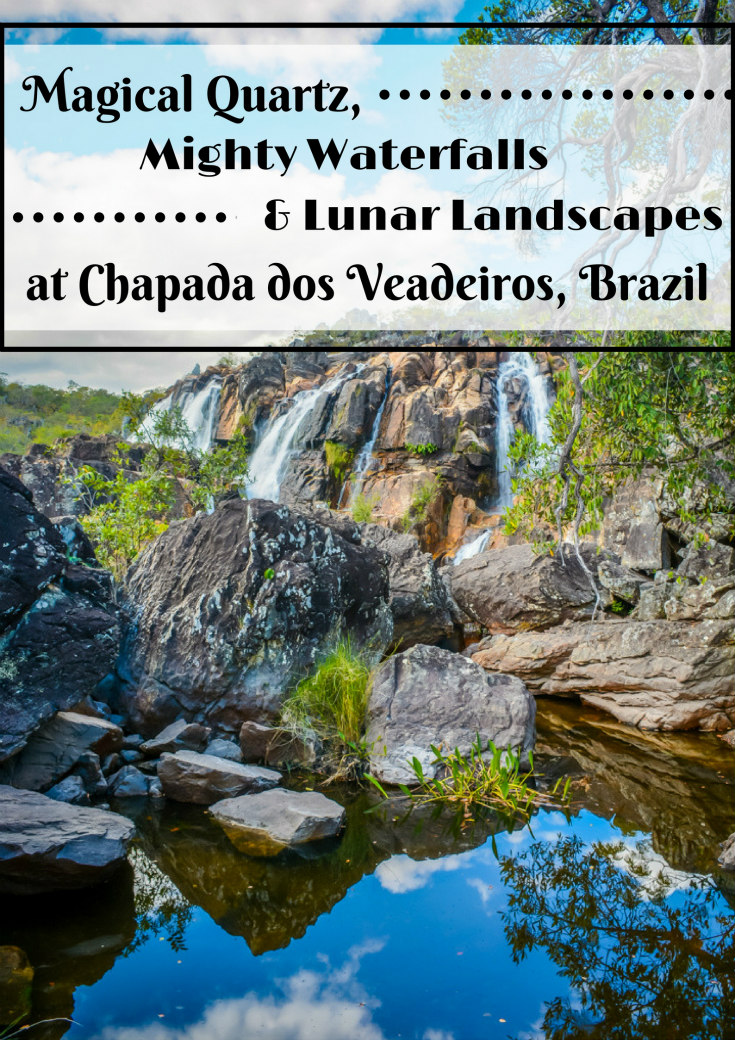 If we’re being completely honest, the only reason why we decided to visit Brasilia (the capital of Brazil) was to go to the France vs. Nigeria World Cup match. That’s not to say that Brasilia doesn’t have plenty to offer its visitors; apart from being the seat of government, the city is also known for its futuristic architecture by the legendary Oscar Niemeyer, city planning that resembles the image of an airplane when viewed from above, and the only city constructed in the 20th century to achieve UNESCO World Cultural Heritage Status. 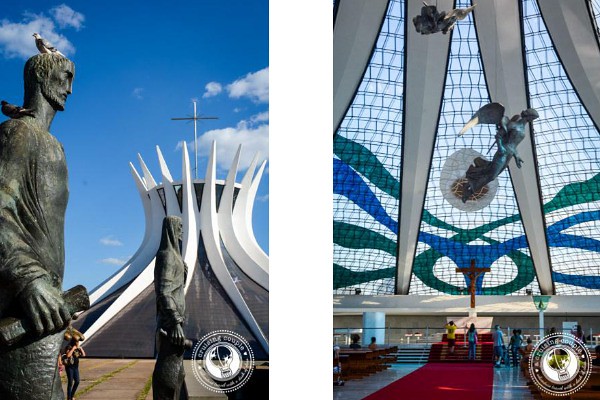 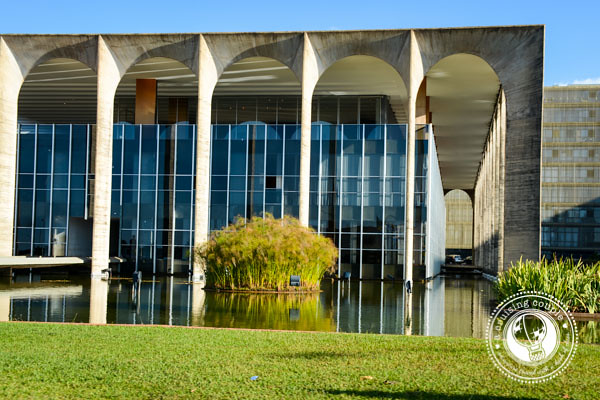 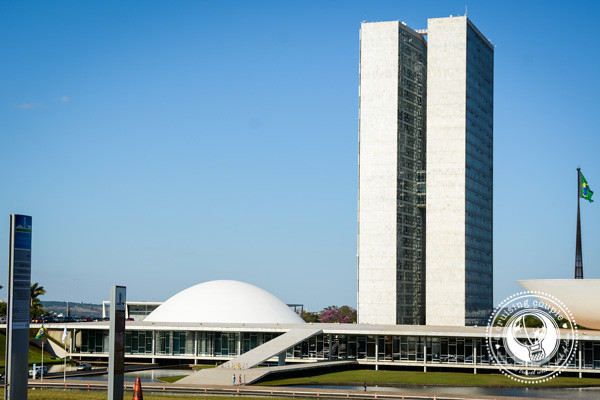 But while we enjoyed exploring all of these unique characteristics of the city, ultimately it wasn’t any of them that made us extra-glad we hunkered down on a ten-hour night bus. What was the determining factor then? The Parque Nacional da Chapada dos Veadeiros. 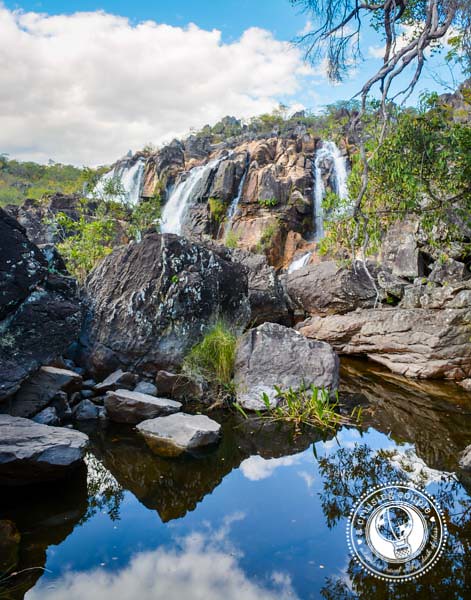 Chapada dos Veadeiros is a national park and UNESCO World Heritage Site dedicated to protecting the unique landscape and flora of high-altitude cerrado (like savanna) across 650km of Central West Brazil.

It was Rodolpho, our host in Brasilia, who first voiced the idea of taking a weekend camping trip to Chapada dos Veadeiros. He promised intermediate hiking through an exotic landscape, rushing waterfalls, mighty canyons, natural swimming holes and relaxing hot springs. He also said he would drive. We were sold.

Luckily Rodolpho’s promises didn’t disappoint. After a straightforward three-hour journey, we arrived at Chapada dos Veadeiros. Not wanting to loose any precious sunlight (the sun sets by six during Brazil’s winter months), we went straight to the park’s visitor center. In the past all visitors were required to bring accredited guides into the park, but now the center allows hikers to follow the two clearly marked and well-maintained paths independently. Both hikes in the park are 10km—one takes trekkers to a series of waterfalls; the other hike leads to canyons and a waterfall.

We opted for the latter and set off for the canyons under the warm cerrado sun. Along the way we passed bushy grassland, barren trees, vibrant velloziaceae flowers, and rolling hills. There were a handful of other hikers on the path, but for the most part, we had the expansive landscape all to ourselves. 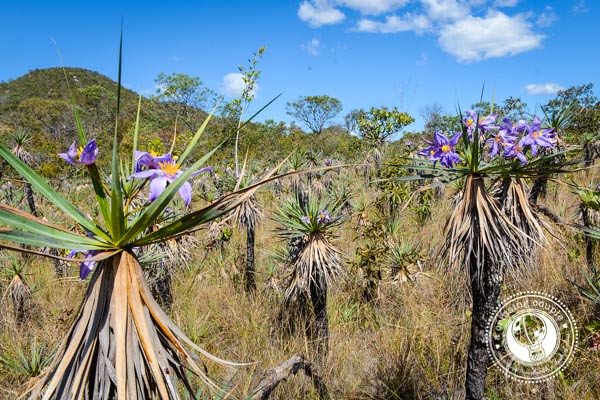 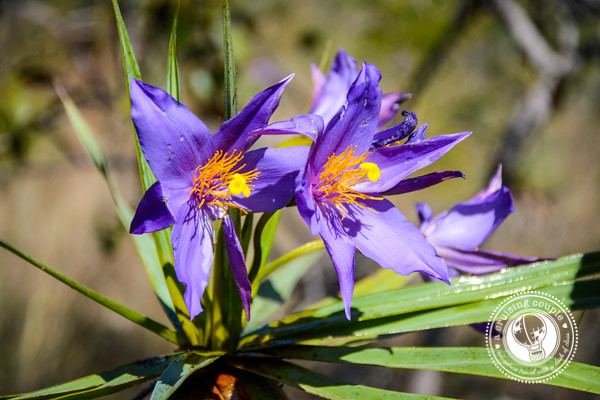 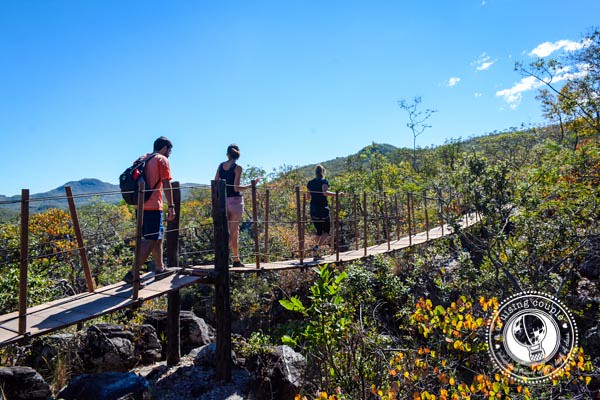 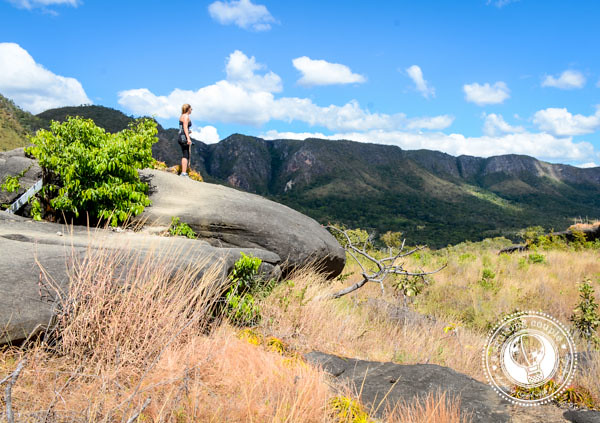 While the hike was enjoyable, the real treat came when we arrived at the canyons. Creatively named Canyon I and Canyon II, these sheer walls were cut out of sandstone by nearby Rio Preto. At the base of the canyon is a crystal-clear swimming pool, along with natural platforms for jumping into the frigid water. 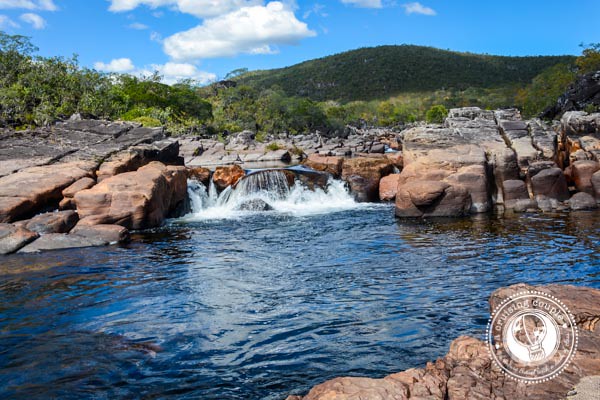 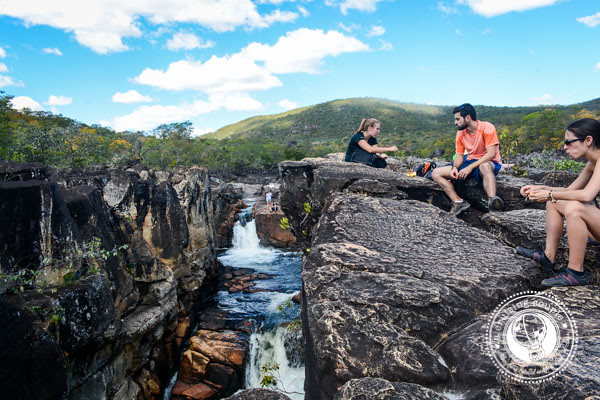 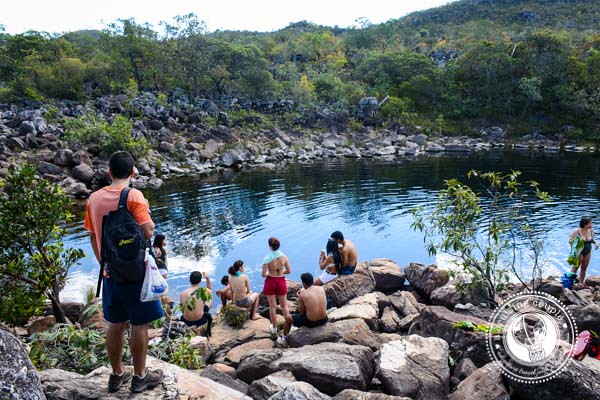 We took a break at Canyon II to enjoy the spectacular sight over our picnic lunches, all the while laughing along with the Brazilian teenagers jumping from the canyon edges. To our surprise, there were actually lifeguards present to ensure the safety of those brave enough to swim in the ice-cold water. It would have been easy to wile away the afternoon sunbathing on the rocks, but Rodolpho had promised that the waterfall was the best (aka warmest) swimming spot, and we were eager to have enough time to thoroughly enjoy it.

We were in awe when we finally arrived at the waterfall, the final attraction on our hike. Though we were visiting during dry season, the cascading water was dazzling, spewing out over layers of rock. While the water wasn’t much warmer here, swimming was certainly more enjoyable—Dan and Rodolpho even decided to go for a little climb on the rocks to get an impromptu shower. 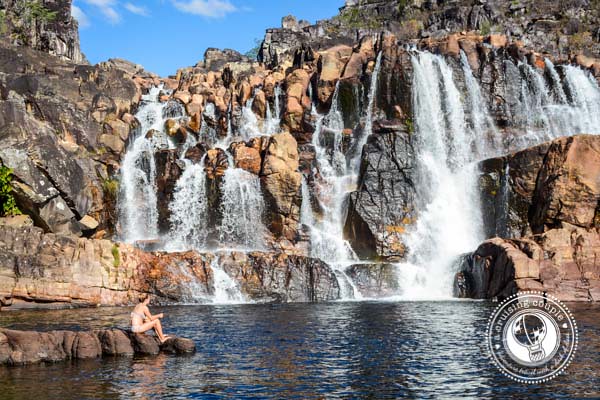 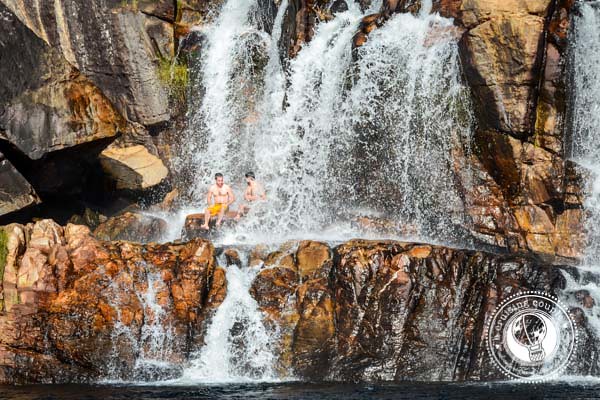 Unfortunately the hike is a loop, so all too soon we had to pack up our belongings and trek back to the car before nightfall. We made it to the car park just as dusk was settling in. The moment we plopped into the car was the exact moment we realized just how utterly exhausted we were. Luckily though we were staying in the slightly odd but entirely charming town of Sao Jorge, conveniently located just minutes outside the National Park.

Perhaps it’s not fair to call Sao Jorge odd, but it is a bit quirky. Dusty with sand-packed streets, a plethora of camping sites, and a distinct hippy vibe, the town is largely made up of a population of New Agers who have moved to be near the abundance of quartz, a mineral some believe to have mystical and healing properties. There have also been a handful of suspected UFO landings in the area, adding to the region’s mystery and appeal.

But we were less interested in the magical quartz and more interested in the all-you-could-eat pasta and cachaca, the latter of which was eccentrically poured from a stuffed goat’s bum from an equally delightful owner. It might not have been gourmet, but it was hearty and filling, and we needed plenty of fuel for the next day’s attraction: Vale de Lua. 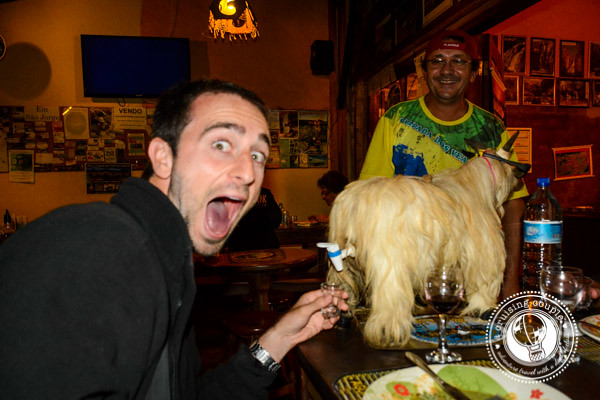 Vale da Lua translates to ‘Valley of the Moon’, and that is exactly what this stunning scene looks like. Millions of years of rushing water from the Rio Sao Miguel have sculpted unique formations into the rocks, creating an unbelievable lunar-like landscape. As in the National Park, it is also possible to swim in the pools at the Vale da Lua, but we preferred to observe the translucent emerald water and smooth geological formations from dry ground. 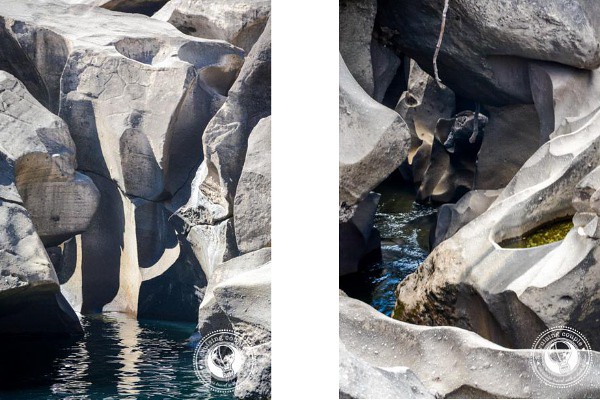 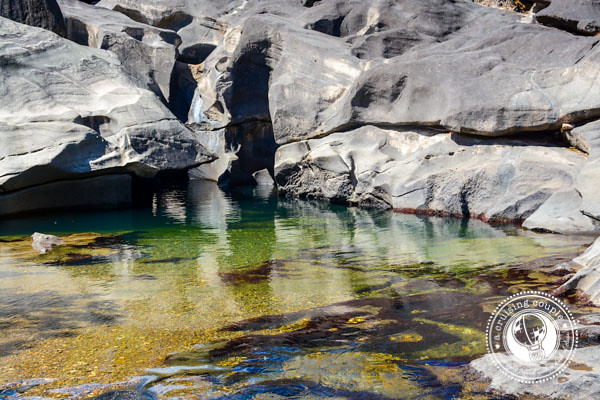 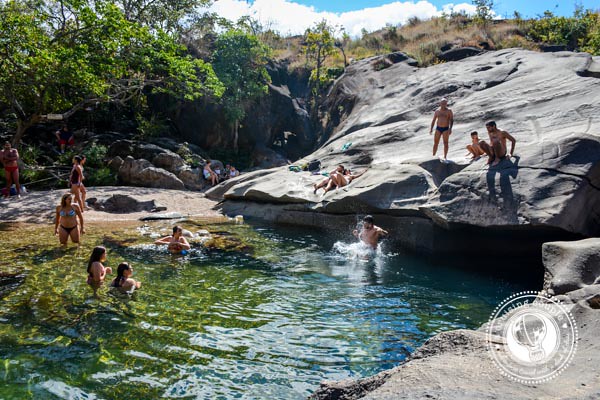 After a while we decided to venture a bit off the trail to follow hand-painted signs advertising a café. We weren’t disappointed—in the most unlikely of locations, surrounded by bush and dry grass, a Brazilian and Israeli had built a house and café where they serve some of the best coffee I have had during my entire time in Brazil. We grabbed a seat at the open-air tables, quizzing them on why they would set up service in such a secluded place.

“We wouldn’t have it any other way,” they promised. “Besides, we constantly have visitors from the Vale da Lua coming in and out. The only problem is the flash floods…”

Somehow, it all made perfect sense. 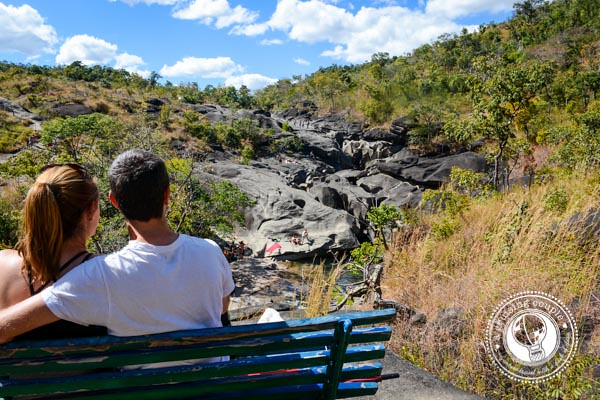 Slightly out of shape from too many hours spent watching World Cup games, our muscles were still feeling fatigued from the hike the day before. We unanimously agreed that the best solution was an evening at the nearby thermal-water river. The water wasn’t necessarily hot, but it was warm enough to spend hours chatting, drinking wine and floating under a starlit sky. As we talked about the picture-perfect places and spectacular scenery we had experienced over the last 48 hours, an overwhelming joy rose up inside of me. It was this moment, this evening of laughter and chatter with new friends from around the world, this unexpected adventure into the middle-of-nowhere Brazil, that reminded me why it is we travel in the first place. It was a serendipitous experience, but an absolutely wonderful one at that.

While we may not believe in aliens or mystic rocks, we won’t hesitate to say: there is certainly something magical about Chapada dos Veadeiros.

Buses leave twice a day from Brasilia to Alto Paraiso, a larger version of Sao Gorge and 38km from Chapada dos Veadeiros. From here it is best to arrange a tour or driver to take you to the park and surrounding attractions. It is much easier though with your own transportation.

There are numerous campgrounds and simple pousadas in Sao Gorge and Alto Paraiso. If you arrive early in the day, then you should have no problem finding accommodation upon arrival. Some of the campgrounds have showers and even WiFi, but they are just as expensive as the simple rooms in the pousadas. Expect to pay around $20 per person for budget accommodation. Alternatively, the Bagua Pousada is one of the classiest options around, with designer, eco-bungalows that feature stone fireplaces and natural wood beams.

Both the National Park and Vale da Lua have fees to enter. We paid around $5 for each, but this was during World Cup time when prices might have been more expensive.

Have you heard of Chapada dos Veadeiros, Brazil before? Have you seen any geological formations similar to Vale da Lua? As always, we love your feedback and comments!