Through the Eyes of a Veteran: A Tour of the DMZ (Vietnam) 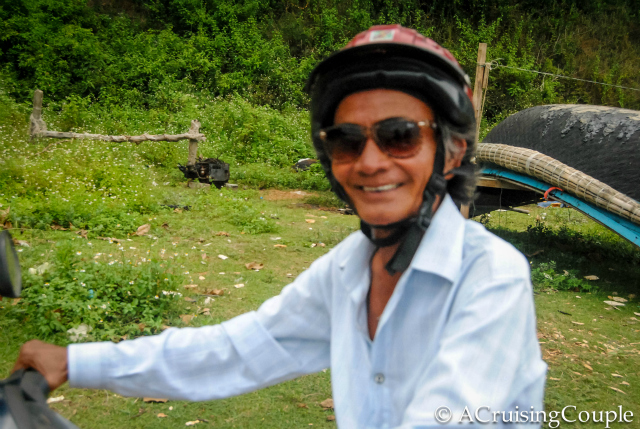 We hadn’t planned on touring any of the Vietnam War sites prior to our arrival in Vietnam. Frankly, turning war into a tourist attraction is a bit uncomfortable for us, especially in a country like Vietnam where the ramifications are still affecting many people’s everyday lives. However, we quickly realized that despite being Americans, our knowledge of the war was (and is) quite limited. When we discovered we could support local veterans and benefit from their first-hand knowledge on the tour, there were no longer any questions in our mind. We were going on a DMZ tour. It proved to be a fantastic decision.

I liked Binh from the moment he showed up at our hotel, leopard-print sunglasses and beaming smile in tow. I was surprised when he began conversing with us quite clearly in English. Binh learned all his language skills from serving alongside Americans on the South Vietnamese side of the war, though if I had to guess it I would have thought he had studied English his whole life long.

Introductions finished and motorbikes rented, we wasted no time in getting started on our private DMZ excursion.

DMZ stands for Demilitarized Zone; it was used to separate North and South Vietnam after the First Indochina War. During the Vietnam War, the area around the DMZ saw some of the worst fighting and relentless bombings—an issue that continues to affect the lives of villagers living around the DMZ and the area called Quang Tri.

We knew that Vietnam still had problems with unexploded ordinance and landmines; however, we were naive to the extent of the problem until we visited the Mine Action Visitor Center. The first stop on our tour, the Mine Action Visitor Center is a small venue that seeks to educate visitors on explosive remnants from the war, and their tragic legacy nearly four decades later. A tour through the center will reveal maps showing the bombing that occurred, documents and photographs from the war, and exhibits of the various ordinances used. It’s an overwhelming experience. Consider this: 15 million tons of bombs were dropped in Vietnam during the war, with a large majority of that concentrated on the area around the Quang Tri province. Of that 15 million, it’s estimated that 10% didn’t go off. And in Quang Tri, 83% of the total land area remains contaminated. It’s no wonder that locals are still experiencing the ramifications from unexploded ordinance when you consider numbers like that. In fact, reports of unexploded ordinance occur on a regular basis. Our guide told us that just two weeks ago, a bomb that had been unknowingly hiding beneath a house arbitrarily went off, destroying half of the two-story home. Luckily, no one was hurt in the incident, but this is not always the case. There have been over 100,000 deaths and injuries as a result of explosive remnants of war, many of them children.

Luckily, there are steps that can be taken to reduce the ramifications of unexploded ordinance. In conjunction to removing unexploded bombs and neutralizing the land, the Mine Action Visitor Center is also educating local Vietnamese, especially children, about the dangers of explosive remnants and the safety steps to take should they encounter some themselves. We could have spent much more time at the Mine Action Visitor Center learning about the support given to survivors of explosive remnants and the ongoing attempts to deal with the tragic legacy. But this was only an introduction to the tour, and there were many more stops waiting.

Our tour continued with a stop at a military cemetery. Rows and rows of graves solemnly hold the bodies of primarily North Vietnamese soldiers; the large majority of these graves are only marked ‘martyr’ as the bodies were found with no identification. Binh told us it’s not uncommon for the families of lost soldiers to hire two fortunetellers to come to the cemetery on separate occasions. If both fortunetellers choose the same grave, it is decided that must be where their deceased loved one lies. Following the cemetery was a stop at the river that served to divide Vietnam. Binh brought the scene to life, telling stories of the rival between the two guard stations on either side of the border: If one side raised a flag, the other side would raise their own larger flag higher. If one side blared their propaganda from speakers, the other side would get two speakers and shout louder. If the North wanted to talk politics, the South would respond with Rock n’ Roll. After learning about so much devastation and turmoil, we couldn’t help but smile at Binh’s light-hearted accounts. We wanted to question him more about his personal experiences during the war, but that would have to wait. First we had to take our tour underground at the Vinh Moc Tunnels. The Vinh Moc Tunnels are the reason why many tourists sign up for a DMZ tour in the first place, and for good reason. The town of Vinh Moc was a community of villagers that received relentless bombing from the Americans (who had aims to drive them away and stop their work providing supplies to the North army). But with nowhere to go, the resourceful community decided to take their community below the soil instead. An underground city was built, complete with a hospital, school, family rooms, water well, and kitchen. It’s difficult to comprehend how this town was able to construct the three-tier tunnel system, reaching down 30 meters into the ground. It’s even more remarkable to comprehend what life must have been like there. The rooms were small, a mere 20-square feet for an entire family, and there was only one bathroom to service the 600 people that would eventually call the tunnels home. While villagers could leave the tunnels for fresh air, lack of sunlight was a definite problem. Amazingly, seventeen children were even born in the tunnels! While our DMZ stops were the perfect way to learn about the impact that the war had and continues to have on local populations, the highlight of the experience was getting to know Binh. He didn’t speak much about his personal experience in the war and didn’t feel obliged to share his opinions on the current political situation—both of which are completely understandable. However, he did speak about other things. Binh told us about being almost 18, forcefully recruited to join the South Vietnamese army. He told us of practicing his English with the Americans, some of who could speak quite good Vietnamese. Binh told us about going to prison for three months for serving on the wrong side of the war, though he had not voluntarily chosen to fight in the first place. However, Binh felt lucky for the short sentence, and he heartily laughed when telling about the community service and Communist ideology classes he had to attend. Although Binh is obviously an extremely smart man, he spent a large portion of his life working in a cement factory for two dollars a month. Luckily he makes a bit more today as a tour guide and taxi driver, and his three children are receiving an education and working at good jobs. We enjoyed speaking to Binh so much that when we finished our tour, we all decided to get an early dinner and a few beers before heading on our own ways. When we did eventually say goodbye, Binh gave us great big, genuine hugs, as though we had known each other all our lives. I think it goes without saying that we highly recommend a private DMZ tour with Binh. We arranged ours at Tam’s Café (a great place to visit in and of itself). Be sure to ask for Binh as we’re not sure how many veterans Tam works with, though I’m sure all would be great guides.

If you want to learn more about the unexploded ordinance problem or see how you can help make a difference, check out Project RENEW

Have you ever been on a war tour? Let us know what you think about it in the comments below.