Bikes and I haven’t always been the best of friends. Don’t get me wrong—as a child, I had a bike like any other little girl, complete with tassels on the handlebars and a basket on the front. It was probably pink. But then, somewhere between being six and sixteen, I kinda forgot how to ride a bike. I know. You’re thinking the one thing ‘they’ say is that you never forget how to ride a bike. In all honesty I still knew how, I was just severely out of practice. So severely that I pretty much just wobbled around whenever I tried to pedal, spending the majority of my time swerving back and forth across the street. Yea, this was in high school. Kinda embarrassing.

And then there was this time in Italy. I was teaching at an English camp in the small city of Piacenza, and staying with a lovely host family. They gifted me with a beautiful bike to borrow for my brief time spent at their home, which I was thrilled about, because something about quaintly biking around a picturesque Italian piazza sounded perfect. However, the host family wasn’t so thrilled when I actually got on the bike and put my skills-or lack thereof-on display.  They were so nervous about letting me loose on my own that they insisted all of us take a biking expedition together—with their four-year old daughter leading the way—so I could practice a little more. Once they felt I had finally passed their biking lessons, they hesitantly let me loose to go fulfilling my romantic visions of exploring the city independently. Unfortunately the ending was a little bit less than ideal when later that day I got hit by a car. Not as dramatic as it sounds since neither of us were really moving, but there was still definite impact between bike and vehicle, leaving me with a lovely scar on my left leg and the bike a bit bent out of shape. Really embarrassing.

So with my snapshots of biking in mind, it’s probably a little hard to believe that Dan and I just biked 131 miles, primarily in two days, from Hualien to Taitung. No falls. No accidents. And only one broken bicycle that wasn’t actually any fault of mine. (That story is coming later.) 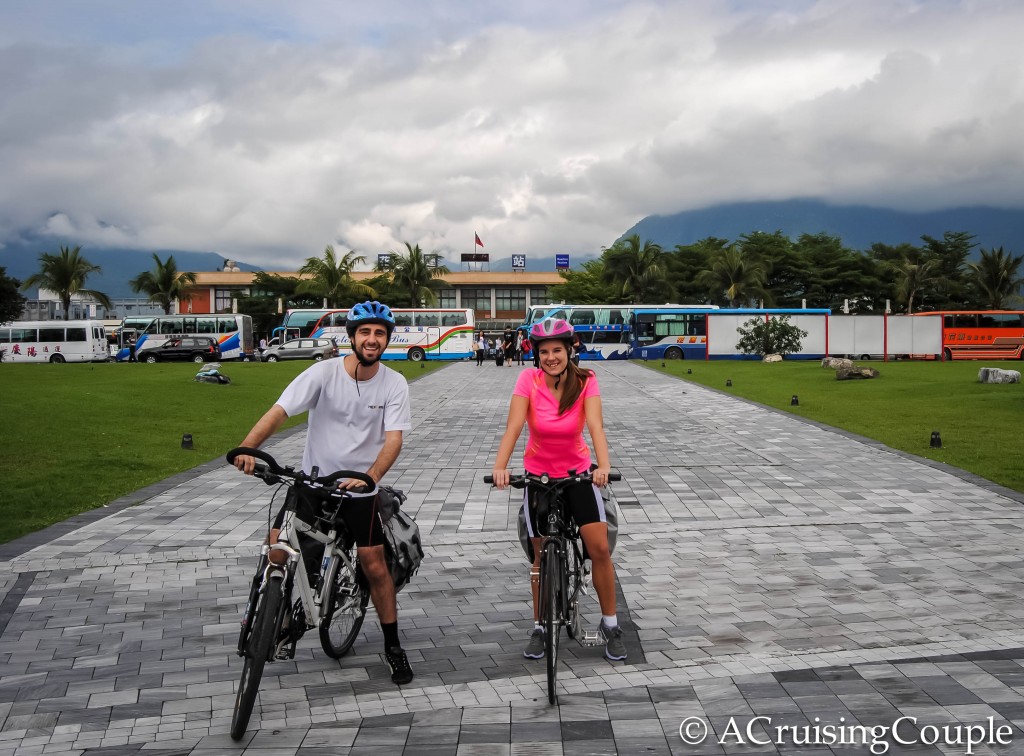 Hualien Train Station: The beginning of our journey 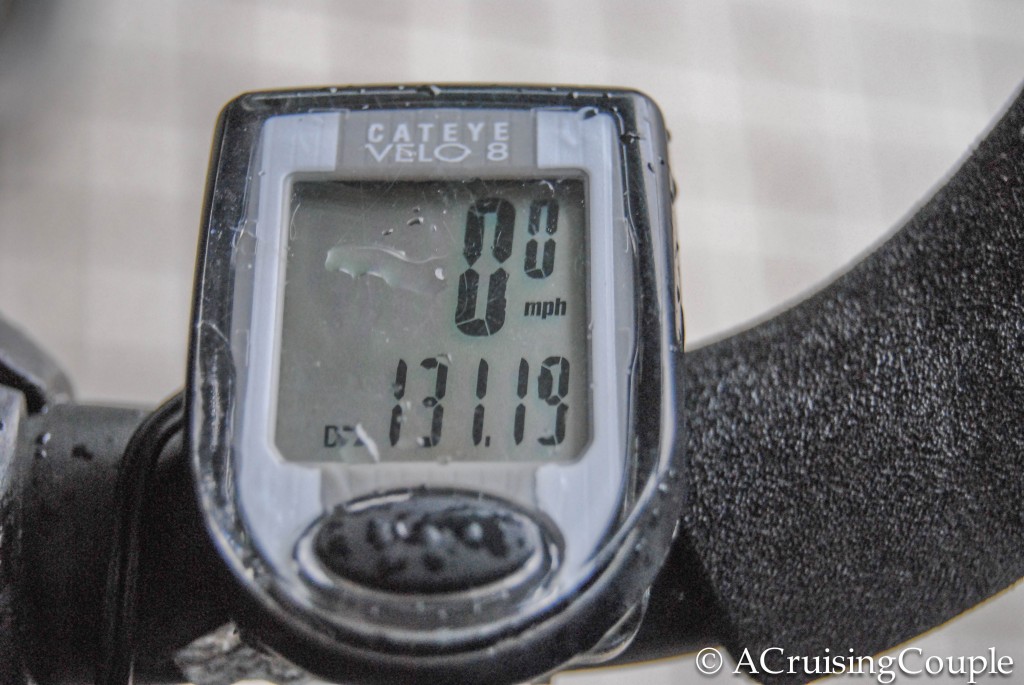 What’s more, cycling from Hualien to Taitung is one of our favorite things we’ve done during our entirety in Taiwan.  The route is extremely popular because of the beautiful surrounding landscapes, but I have to say I underestimated how truly stunning the East Coast is.  We were blessed with amazing weather-quite possibly a first for us in Taiwan-and slightly overcast skies kept us cool while still allowing divine views. Dramatic peaks and gorges of the East Rift Valley towered on our left, the glistening Pacific Ocean stretched on for miles on our right, and verdant green rice paddies surrounded us on either side.  Needless to say we were entertained by the beauty around us, which also helped to distract us from the intensity of riding so far. 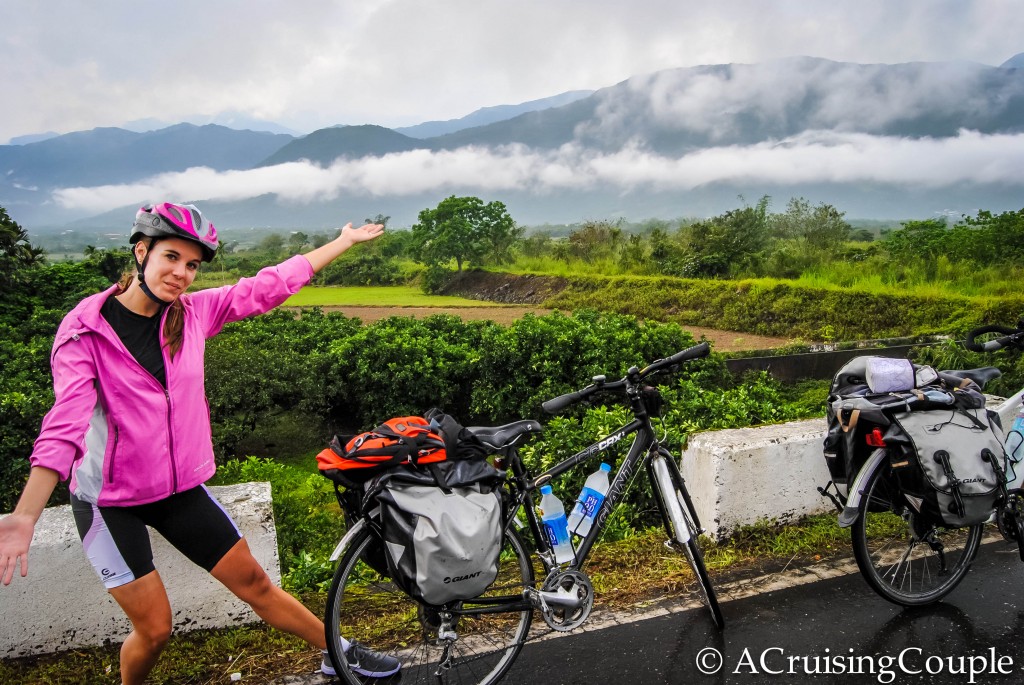 Cycling In the East Rift Valley 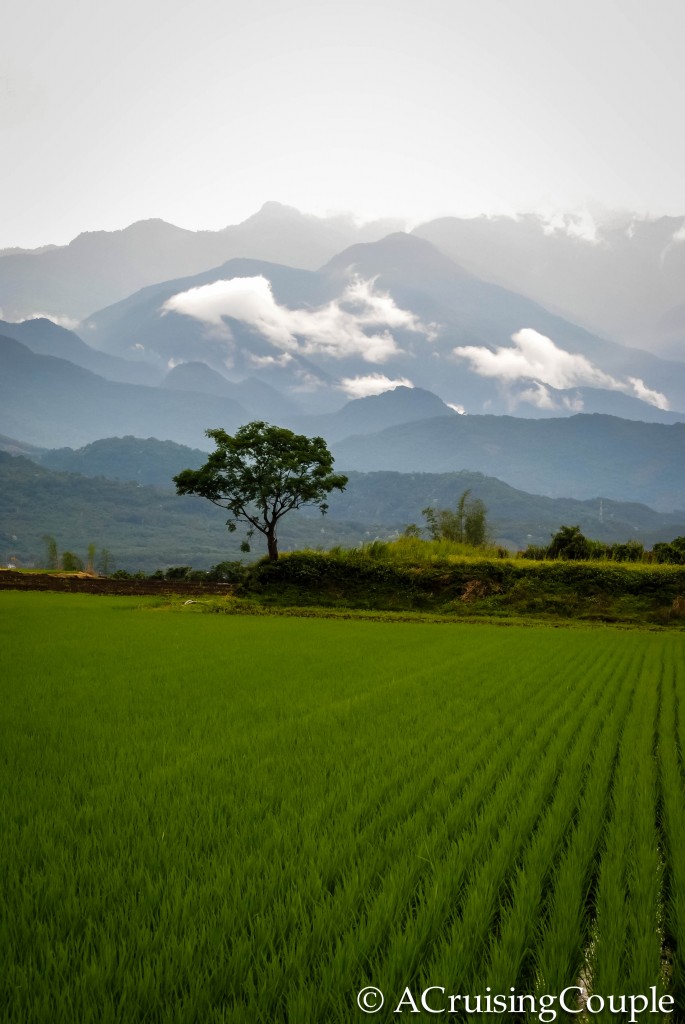 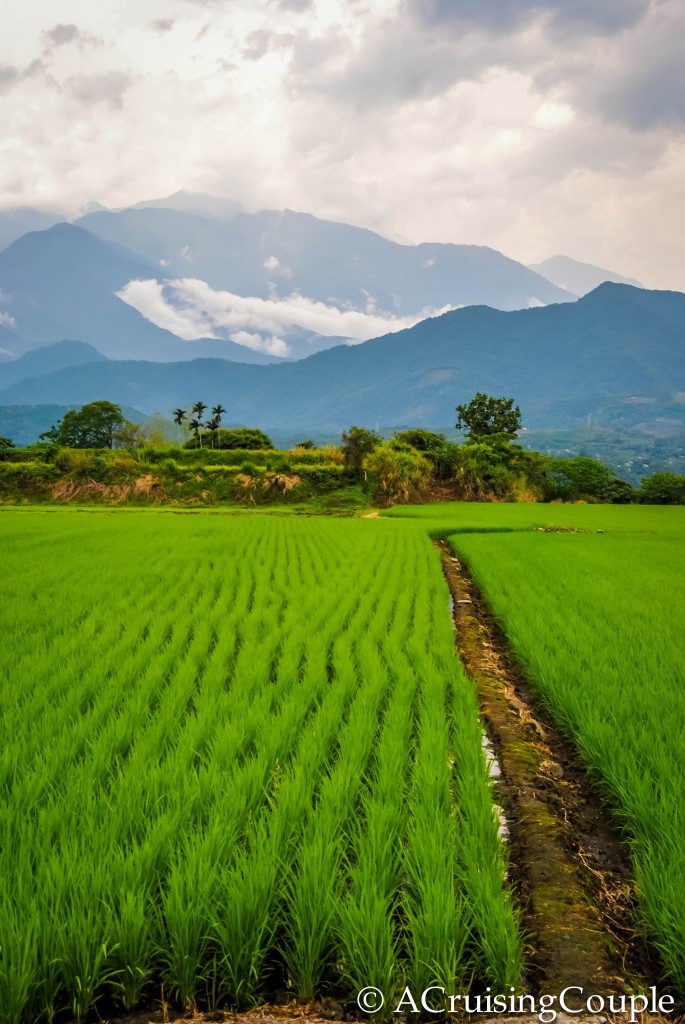 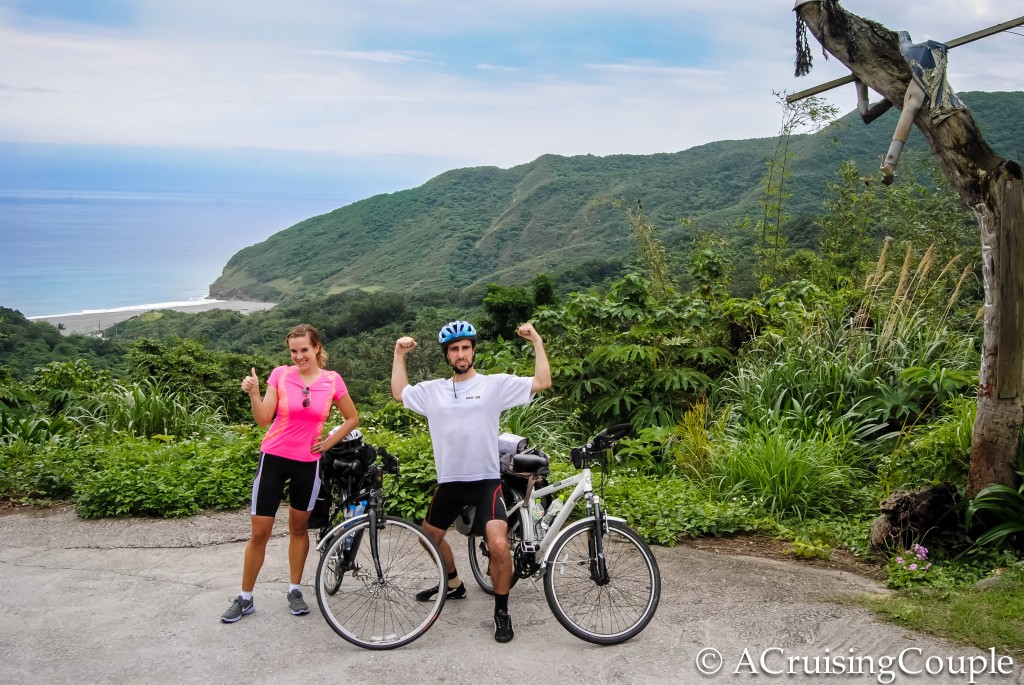 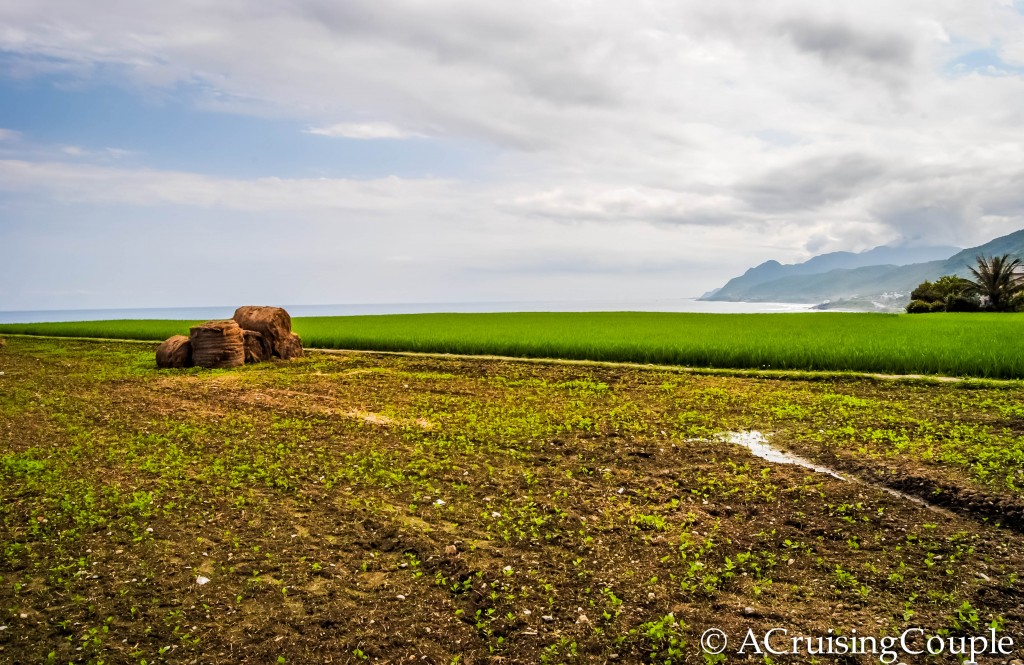 Rice Fields on the Coast

We followed a route we found here. In our opinion it is the most scenic option, as it includes the popular Highway 11 (along the coast), Highway 9 (through the East Rift Valley), as well as Route 193 and Highway 30. Be forewarned though, this isn’t the easiest route as it includes some pretty steep climbs in the mountains for a lot of the trip. But if you have the stamina, it’s totally worth it. There is one particularly steep climb on the 30 that seems to stretch on for ages. But when you finally make it to the top, sweat-drenched and praying for an end to the vertical ascent, you’ll come to a long tunnel. On the other side of the tunnel is the most incredible part of the whole cycling trip: a bird’s-eye view is the reward for the ridiculous climb, as well as twenty minutes of downhill coasting that takes you past striking snapshots of the Pacific as it collides with the adjacent mountains. Ahhh-mazing. 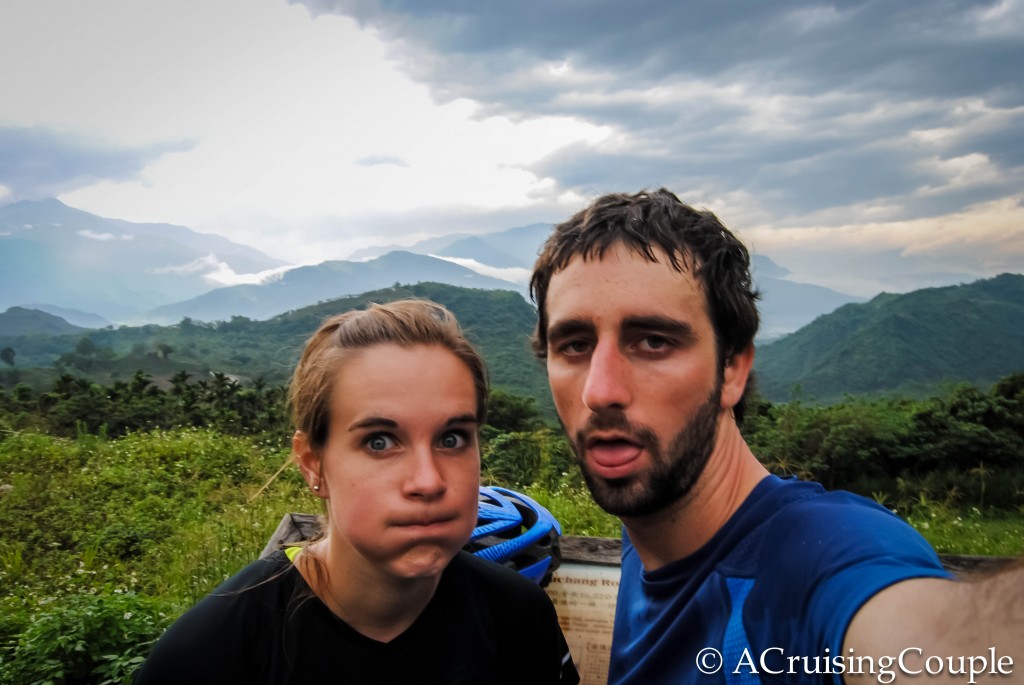 Top of the Mountain 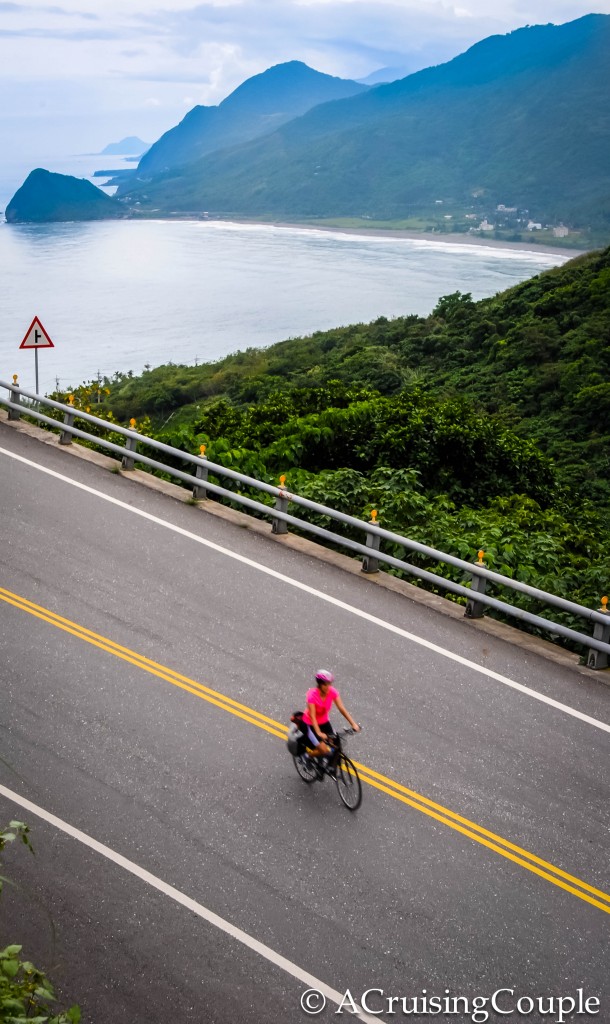 Downhill Section on the East Coast 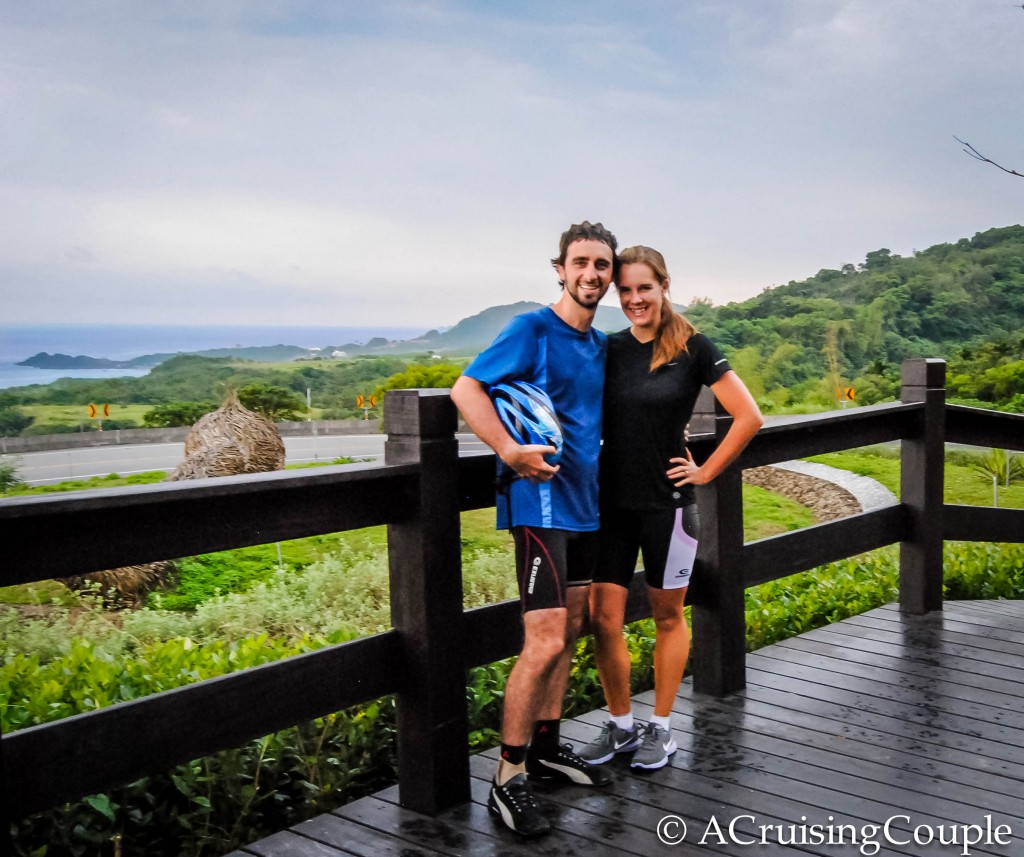 Scenic Overlook After the Tunnel

We split the trip up into three days; however, if ending in central Taitung, the trip could easily be done in two. The biggest advantage of taking three days to complete the route is that it allows you to stay the night in Ruishui and Dulan—two cities we would love to explore further in depth. Ruishui is a scenic little town primarily visited for its Japanese-style hot springs. Dulan is a small beach town about 20 kilometers outside of Taitung City, filled to the brim with surfers and hippies, most of whom are expats.  If you want to add some surfing to your cycling trip—like Dan did—Dulan is the best place to stay.  If we could do anything differently, we would have gotten an earlier start the first two days of our trip, allowing more of an opportunity to explore these two places. 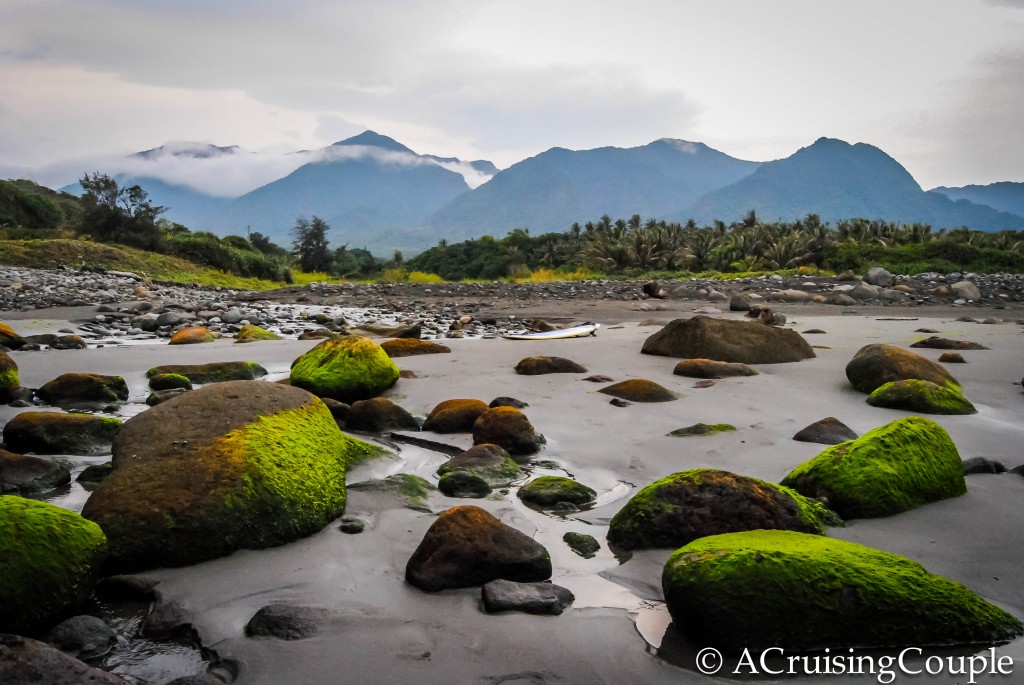 Dan and I like to think we’re in relatively good shape, but after three days of cycling, our thighs were on fire. That being said, if you are pretty fit, then you can totally handle cycling from Hualien to Taitung. Additionally, staying on Highway 11 the whole way does make the trip a bit more manageable. 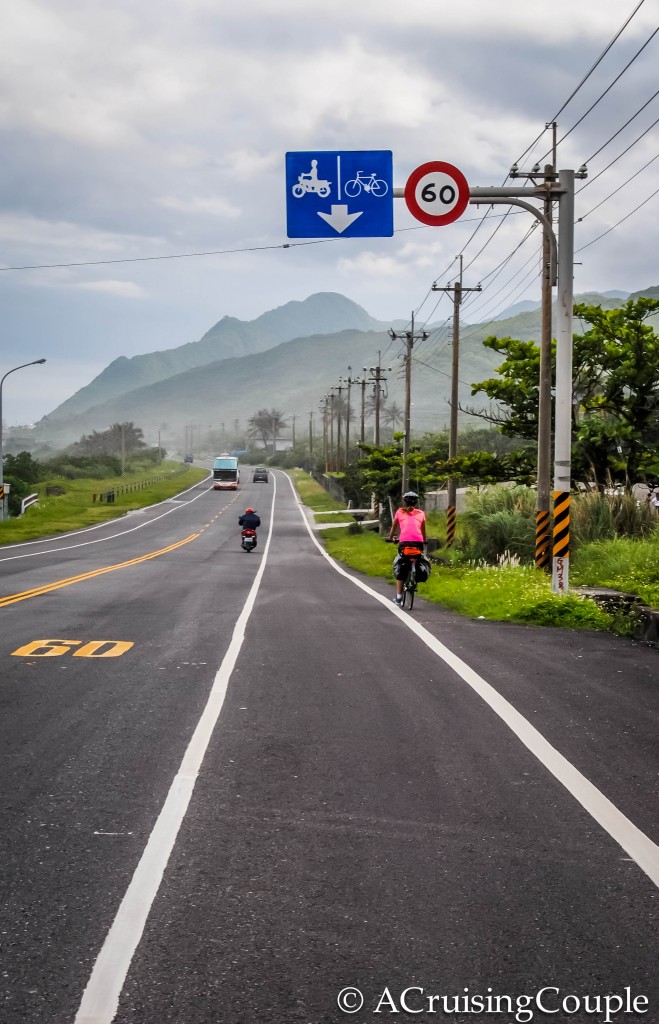 If going on a cycling trip, there are absolutely two things you must invest in:

Other than that, don’t bring much. You’ll really feel the extra weight pulling you backwards on those hills.

We aren’t naïve to the fact that 131 miles isn’t actually that far; after all, tri-athletes practically cover that distance in a couple hours and it’s just a third of the race. But if you had told me in high school that I was going on a multi-day biking trip, I would have laughed in your face. Now, after doing it once, I’m already thinking about doing it again. Even through the sweat and hard work, all I could think during our trip was how lucky we were to be cycling around such a beautiful country. There’s definitely a sense of fulfillment in knowing your own body is what powered you to get from point A to point B, no matter how far that might be. Plus, cycling is a great way to discover a new place, as it allows you to travel slowly but efficiently while really taking in the surrounding scenes. It’s eco-friendly, locals love to cheer you on, and you’re forced to travel light. Not to mention, beer tastes a heck of a lot better after you worked all day for it. We are totally inspired to take another cycling trip on a larger scale.  Now we just need a new destination-any suggestions? 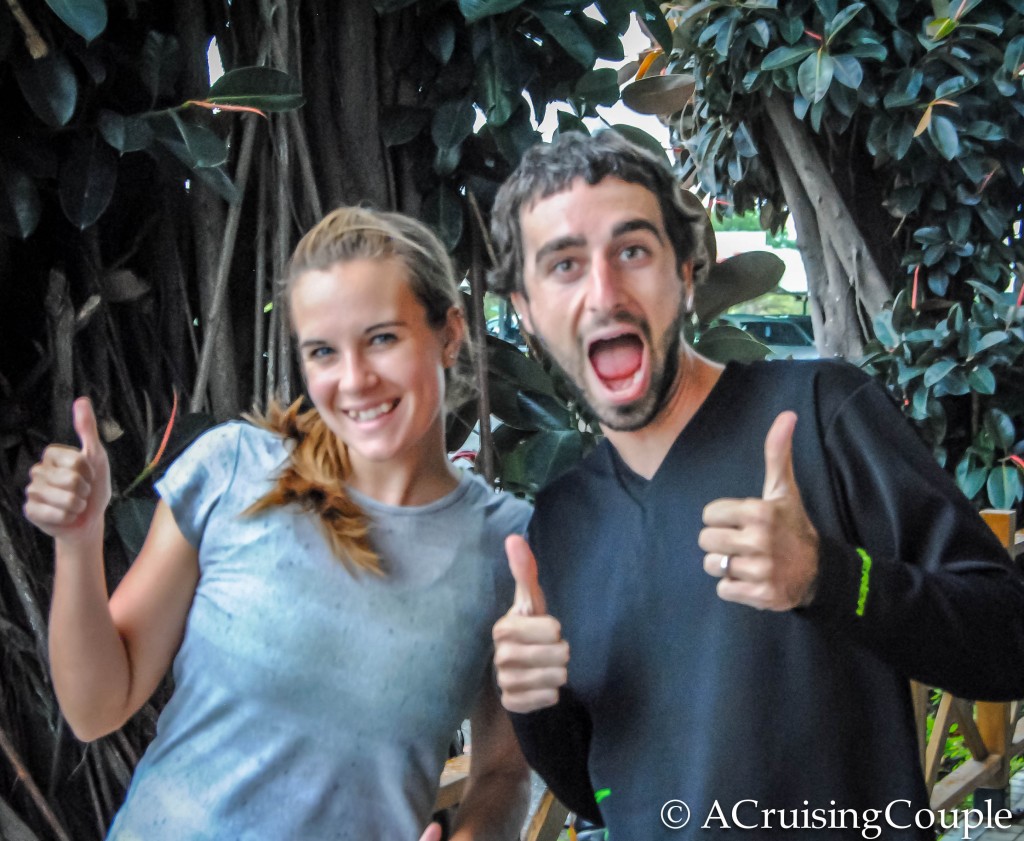 There is the whole scenario of the broken bicycle and how it practically took everyone on the East Coast to help us get the situation sorted. That story to come later this week… 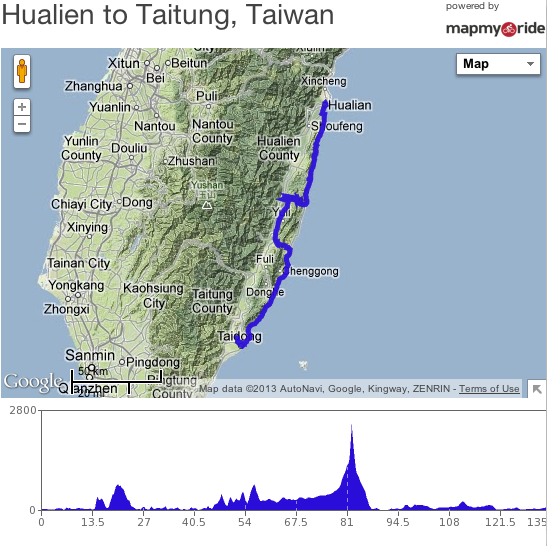